On Tuesday, 280,000 viewers tuned into the first major auction of the fall season live-streamed from Christie’s Rockefeller center headquarters. The evening sale, which combined modern and contemporary art with the fossilized skeleton of a Tyrannosaurus Rex, generated $340.8 million with buyer’s fee across 46 lots. Hammering at $294 million, below the pre-sale low estimate of $305.9 million, it realized a solid sell-through rate of 84 percent. Although four major lots were withdrawn before the sale started.

The results come in over the October 2019 contemporary art evening sale total of $325.2 million. 8 percent of lots sold above the high estimate, 47 percent placed within their estimate ranges and 22 percent failed to reach their low bar. 16 lots total came to the auction with guarantees.

Christie’s executive team attempted to further hone the hybrid live-streamed auction format this time around. Following July’s $420 million global “ONE” sale that featured four of the house’s principal auctioneers in four different locations around the world, this iteration was run solely from New York with bidding rooms in London and Hong Kong. Breaking from the traditional Autumn auction calendar with sales in London in October and New York in November, Christie’s provided an additional new feature to this sale, running commentary from Richard Lloyd, Christie’s prints specialist and Bonnie Brennan, Christie’s head of Trusts, Estates and Wealth Management. Despite the effort to add color to the events, high estimates and third-party guarantees on many of the top lots meant the sale lacked energy. Though the evening’s greatest novelty, the dinosaur sale was a raging success with bidders driving the hammer price to more than three times the high estimate of $8 million when it sold for $27.5 million at the hammer. The final price was $31.8 million.

Among the top lots of the night was Paul Cézanne’s watercolor Nature morte avec pot au lait, melon et sucrier (1900-06), which sold for $28.6 million. Two major lots from the collection of investor and Revlon Inc. owner Ron Perelman were among the top prices. Cy Twombly’s Untitled [Bolsena] from 1969 went for $38.7 million, which met its low estimate of $35 million once fees are added. A deep maroon Rothko from 1967, which Perelman acquired privately in 2002, sold below its low estimate for $31.3 million with buyer’s fees.

Christie’s senior director of Trusts, Estates & Wealth Management, Tash Perrin, auctioned a 67 million Tyrannosaurus rex skeleton named “Stan” without a reserve price. That turned out to be irrelevant as the fossils made a record price from a bidder on the phone with Christie’s London Natural History and Sciences specialist James Hyslop. It surpassed the previous record for a dinosaur fossil of $8.4 million paid in 1997 for ‘Sue,’ by the Field Museum of Natural History in Chicago. 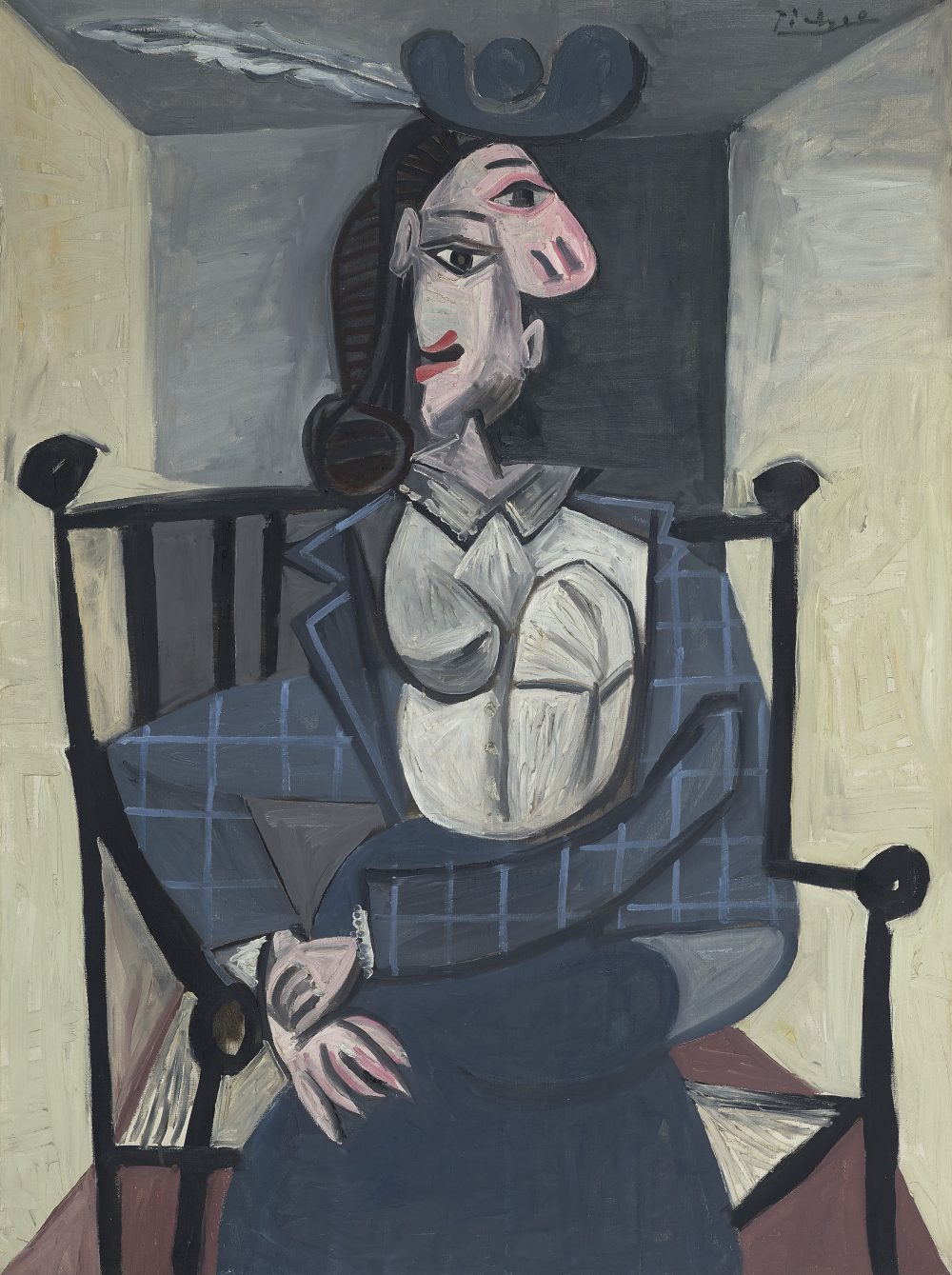 After a protracted pause for a buyer on the phone with contemporary art specialist Barrett White, Pablo Picasso’s guaranteed Femme dans un fauteuil (1941) depicting his muse, photographer Dora Maar, sold for $29.6 million, hammering in the middle of its estimate range. Willem de Kooning’s Woman (Green), 1953-55, another Perelman lot, hammered at its low estimate of $20 million, going to a bidder on the phone with Alex Rotter, Christie’s Chairman of 20/21st century art department, for a final price of $23.3 million. Jackson Pollock’s guaranteed 1946 red drip painting, sold from the Everson Museum of Art to fund the museum’s efforts to diversify its collection, hammered at its low estimate of $12 million. It sold for $13 million with buyer’s premium.

The tame sale had few inflection points with modern works made in the pre-war era. René Magritte’s painting Le nu couché (1928) depicting a reclining nude woman balancing a bowler hat, book and glass, all recognizable motifs of the surrealist’s oeuvre, sold for $6.9 million. It beat its high estimate of $6 million. In a pre-sale talk, dealer Jeffrey Deitch said he advised the current seller to buy the early Magritte, who acquired it at a Sotheby’s London sale in 2000. This was followed by art deco painter Tamara de Lempicka’s painting of two nudes, Les deux amies from 1930, that sold for $9.4 million. It surpassed its high estimate of $8 million. The painting brought high returns for the seller, who purchased it in 1988 at Christie’s for $559,743. 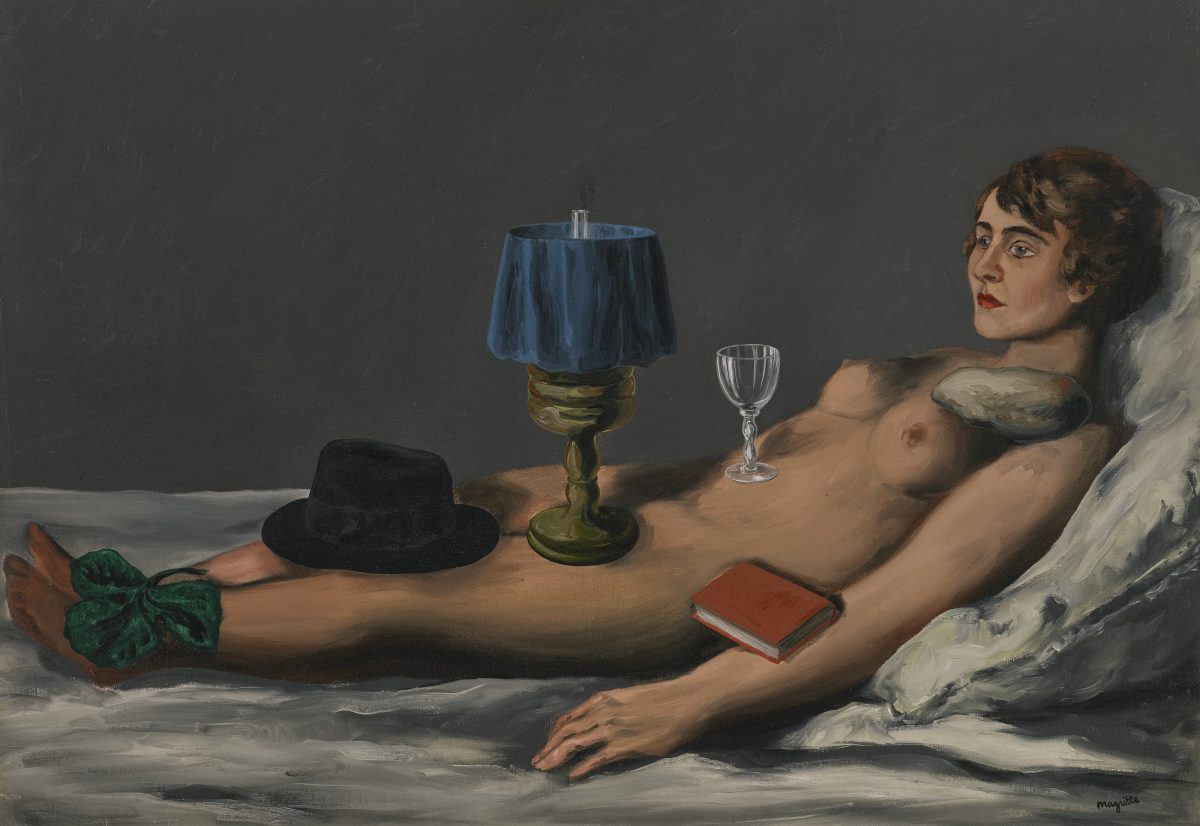 Cecily Brown’s abstract I Will Not Paint Any More Boring Leaves (2), 2004, which was last shown at the artist’s traveling survey in 2007 went for $5.1 million to a New York buyer competing against interest from Asia, selling at its high estimate. Mark Bradford’s mixed media collaged canvas Ghost Money (2007) sold for $7 million. It beat the low estimate of $5 million. The seller bought it at Christie’s in May 2015 for $3.6 million.

Ed Ruscha’s neutral monochrome text painting, An Invasion of Privacy (1973) sold for $3.2 million, landing within its estimate range. Salvador Dali’s Bouche mystérieuse apparaissant sur le dos de ma nurse, a gouache painting on a magazine cover from 1941 reproduced in the artist’s autobiography sold for $1.7 million. It beat its estimate of $1.2 million. A gouache on paper from 1910 by Egon Schiele sold for $1.5 million, but failed to meet its low estimate. Other blue-chip modern works by Joan Miro and Vincent van Gogh failed to find buyers.