The introductory wall text for the Shed’s grand retrospective of the work of Hungarian-American artist Agnes Denes (b. 1931), “Absolutes and Intermediates,” cites Leonardo da Vinci as a like artistic mind (as do numerous passages in the catalogue). The upper floor of the show presents an exhaustive survey of Denes’s work from the 1960s to the present day—drawings dotted with mathematical figures; anatomical studies and finely rendered graphs; and records of her efforts toward land reclamation and environmental remediation. The picture emerges of a prolific, intellectually omnivorous figure devoted to real-world change as much as artistic innovation, and the comparison to Leonardo—that visionary student of geometry and physics, architecture and flying machines—seems less absurd than it might initially have.

The question, however, nags: why reach back to the fifteenth century? One could speculate that the Shed’s figuring of Denes as an unclassifiable savant more in league with Renaissance humanists than with her direct contemporaries serves in part to bracket the question of her relative absence from canonical narratives of postwar art history. The framing unmoors her from the artistic context of New York, where she has lived since early adulthood, and what is sometimes missing from the otherwise rich exhibition is an uncovering of the ways in which her practice does resonate with work associated with movements like Land art and Conceptual art. It is through this sort of unearthing that one best grasps the qualities that have, perhaps, rendered Denes’s work exceptional and hard to categorize: a disarming optimism, and a direct investment in the enrichment and longevity of humanity.

“Absolutes and Intermediates” begins with Denes’s “Philosophical Drawings” (1969–80), a formative body of prints and ink drawings on graph paper, vellum, and tracing paper in which she attempts to visualize diverse corners of human knowledge—ranging from the formation of the universe to religion—in order to better understand them. The works’ conceptual scope might owe to Denes’s desire, early on, to combat the “fragmentation” of knowledge wrought by specialization. Thought Complex, a white-on-black monoprint from 1972, is a particularly representative “Philosophical Drawing”: dense with notated geometric projections and plotted graphs, the work, per Denes, is a “diagrammatic presentation” of thought processes. Largely obscure but abundant in visual interest, Thought Complex is a vibrant index of ideation, an image of neuronal fireworks. That we can’t completely crack its code is just as well, for therein lies its seduction. In Introspection I—Evolution (1968–71) and Introspection II—Machines, Tools & Weapons (1972), a pair of nearly twenty-one-foot-long monoprints laid out in vitrines, Denes moves beyond the brain and approaches the history of humankind. In the first work, she attempts, through cross-sections of skulls, studies of cell division, and taxonomic tables, to wrest encyclopedic order from the evolution of our ape ancestors to humans capable of art and science. 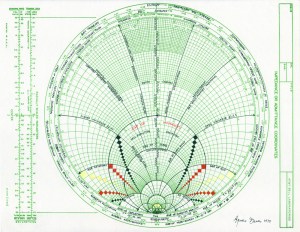 The “Philosophical Drawings” recall the strands of ’60s Conceptual art that relied on numbers and language, even if Denes has stressed her distance from that movement. The exhibition label for the drawing The Human Argument (1969–70) notes that the work was first published in critic and curator Lucy Lippard’s landmark Conceptual art anthology Six Years: The Dematerialization of the Art Object (1973). Just as notable is that this and several other “Philosophical Drawings” were included in the fourth and final of Lippard’s “numbers shows,” as they became known (each was titled after the population of the city in which it was held). These exhibitions took place in the late ’60s and early ’70s and showcased an emerging generation of artists tending toward the ephemeral, “dematerialized,” and conceptual.

Featured alongside Denes in Lippard’s show, German artist Hanne Darboven stands as a salient point of comparison, as her early graph-paper drawings crowded with calculations seethe with mental energy in much the same way as Denes’s “Philosophical Drawings” do. But if Darboven’s dizzy mathematical exercises strongly resist comprehension, even Denes’s most arcane investigations at least purport to make tangible and available that which is unapproachably abstract. Indeed, while much Conceptual art—particularly that of figures like Douglas Huebler and Dan Graham—approached questions of syntax, seriality, and authorship with an aloof intellectualism, Denes’s works of “visual philosophy” have a welcoming pragmatism, demonstrating a desire to accumulate and represent knowledge of the human. In her series of “Body Prints” (1971), shown on a wall opposite the “Philosophical Drawings,” Denes made ink impressions of her breasts and her then-husband’s penis on her ubiquitous graph paper, underlining her desire to give knowledge a kind of flesh.

Also shown on the exhibition’s upper floor is ample documentation of Denes’s “Public Works” series, the environmental interventions for which she may be best known. Center stage is a presentation of the celebrated Wheatfield—A Confrontation (1982), a Public Art Fund commission for which Denes planted two acres of wheat in the Manhattan landfill that would become Battery Park City. One block from Wall Street, Wheatfield confronted a stronghold of late-capitalist excess with a plainly material gesture toward sustenance as a basic need, highlighting disparities of wealth and well-being and the continuing fact of world hunger. Wheatfield appeared as a brief, shimmering mirage: after four months, Denes harvested the grains and donated them to the touring exhibition “International Art Show for the End of World Hunger” (1987–90). 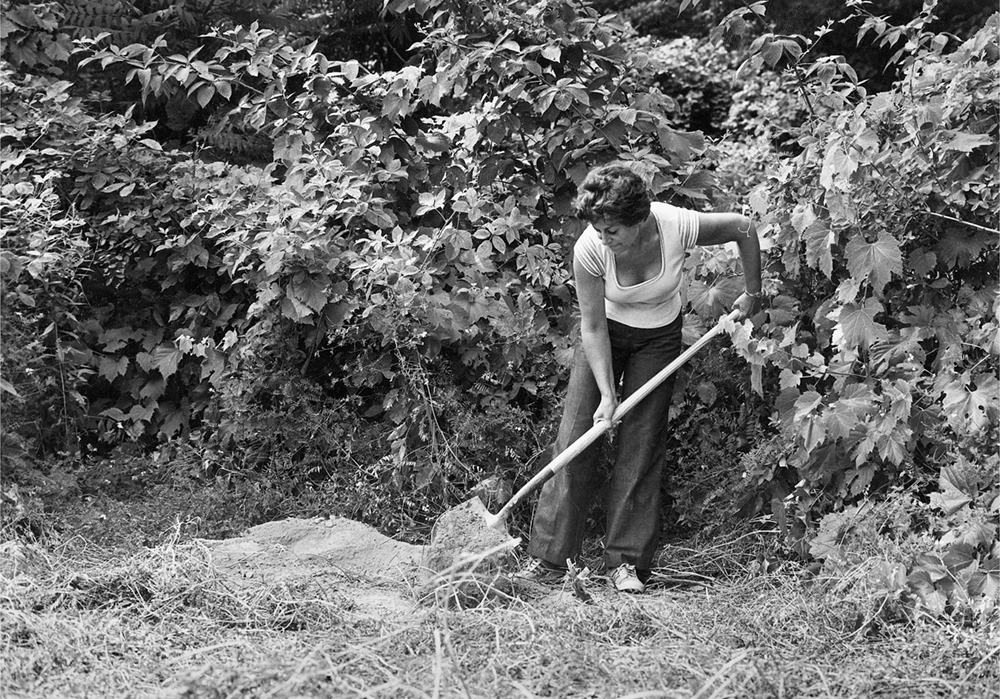 The line between art and activism that Wheatfield straddles is made more porous by Denes’s efforts toward more permanent land reclamation. For the collaborative work Tree Mountain—A Living Time Capsule—11,000 Trees, 11,000 People, 400 Years (1992–96), which was sponsored by the United Nations Environment Programme and the Finnish Ministry of the Environment, Denes and 11,000 volunteers planted 11,000 pine trees atop a man-made mountain at the Pinziö gravel pits near Ylöjärvi, Finland. Represented in the Shed exhibition by architectural models and in drone footage, and powerfully framed as an ongoing project of collective concern, the living, breathing Tree Mountain suggests a belated retort to the canon of Land art and its frequent emphasis on inert monumentality.

It should be acknowledged that, contrary to Denes’s own assertions, nuanced concerns around land use and abuse were not wholly uncommon among Land artists, particularly in the decades that followed the inaugural “earthworks” of the ’60s. Especially notable in this regard is Nancy Holt’s unfinished Sky Mound (1988–), an effort to transform a landfill in New Jersey’s Meadowlands into a public park. However, Denes’s Tree Mountain and Wheatfield contrast starkly with the efforts of figures like Michael Heizer, whose megalithic structures and earthen devastations, he has suggested, might just outlast a civilization extinguished by war and pollution. Refusing to accept an apocalypse as inevitable, Denes invests in our futurity, precarious as it may be. 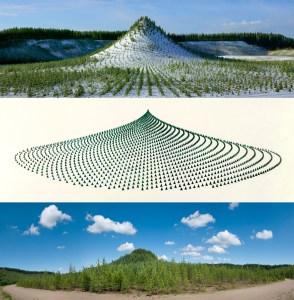 This dedication to the future is felt acutely on the intimate lower floor of “Absolutes and Intermediates,” which is devoted entirely to Denes’s “Pyramid Series” (1970–). In this series, she employs the form of the pyramid variously as geometrical abstraction, diagrammatic tool, and a literal (inhabitable) structure put to a variety of speculative uses. Many of the drawings on view depict pyramidal dwellings and monuments designed for an envisioned “Future City,” and the Shed has commissioned sculptural models of two such renderings. Model for Probability Pyramid—Study for Crystal Pyramid (2019) scales down the intended 100,000-block structure to a more modest 6,000 blocks, and renders them in 3D-printed, compostable form rather than in glass. This faintly translucent model, measuring seventeen feet tall and softly illuminated from within, is imposing and properly otherworldly. Equally affecting are the drawings that tease out the utopian character of Denes’s “Future City,” portraying self-supporting architecture and floating water habitats meant to provide safe haven, perhaps, in the wake of ecological devastation.

Like Tree Mountain, whose pine trees the artist chose for their long lifespan (three hundred to four hundred years), Denes’s pyramidal dwellings and monuments presuppose a future in which humans have persisted, however improbably. The prospect that such pyramids might deliver us from the threat of rising waters, battering storms, and dwindling resources is more than a bit fantastical, even if Denes has argued that these structures “have little science fiction about them” and considers the drawings to be renderings awaiting realization. However, her unalloyed hope has a restorative power in our moment of cynicism, defeatism, and uncertainty. Here, as elsewhere in “Absolutes and Intermediates,” faith in the perpetuity of human life and knowledge is posited as the artist’s ultimate project: one that we are welcome—even compelled—to take part in. While the Shed’s retrospective sometimes lapses into detachment, dialing art historical conversations down to a whisper, it is anchored powerfully in Denes’s commitment to futurity. Upon leaving the exhibition, little else feels so urgent or necessary.