This has been the year without Art Basels and Friezes, and in most parts of the world, all other art fairs of the kind—physical ones, with collectors strolling the aisles and dealers making their pitches—are still a long way off. But in the Asia-Pacific realm, where the coronavirus pandemic is comparatively under control, some of the events are proceeding apace, albeit in altered forms.

On Thursday in South Korea, Art Busan & Design opened its doors to VIPs at the Busan Exhibition and Convention Center for its ninth edition. There are 60 exhibitors, including Kukje, Lehmann Maupin, Hyundai, Gladstone, and Thaddaeus Ropac, as well as temperature checks, mask requirements, and a strictly limited number of tickets.

The annual showcase typically runs in May, but in mid-March, with infection rates exploding around the globe, Art Busan’s organizers opted to postpone it to the second half of the year. “Like everyone else, we hoped and we assumed that after the summer things would be a lot better,” said fair director Seokho Jeong. “How naïve were we?”

Art Busan considered September and November for the new date and settled on the latter, so that it would occur a week after the inaugural edition of the Art SG fair in Singapore. Even though Art SG was nixed (for the second year in a row), that timing proved to be prescient. A Covid-19 outbreak in South Korea in late August forced the cancellation of the long-running Korean International Art Fair just weeks before its planned September run.

Making the decision in March, Jeong said that they were anticipating a crowded fair schedule in the fall and the likelihood of galleries facing tough balance sheets, so they planned to host only around five dozen galleries, a steep drop from the more than 150 they have in a typical year.

While many exhibitors would fly into town to do business under normal circumstances, South Korea enforces a two-week quarantine on those arriving from beyond its borders, which dissuaded some but certainly not all from participating. Ropac director Kyu Jin Hwang, who is based in London and focuses on Asia, said that she had just completed the mandatory wait for the second time. “I arrived in Korea in early October for quarantine, then had meetings with clients for a week,” she said. She’s showing work by Georg Baselitz, Jules de Balincourt, and Lee Bul, among others.

And such travel restrictions are not necessarily an insurmountable hurdle for foreign dealers unwilling to brave quarantine: they now have people stationed in Korea. 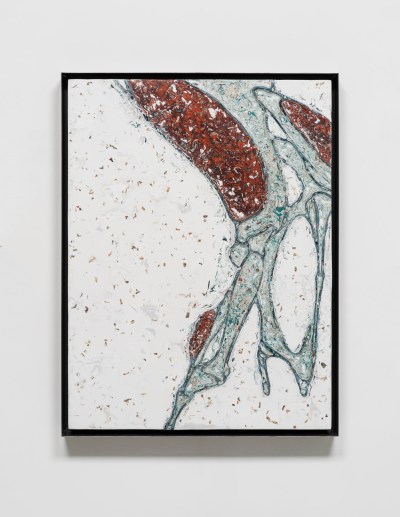 Lee Bul, Perdu XLIII, 2020, which will be on the stand of Lehmann Maupin, which has had a Seoul location since 2017.

Gladstone, which has branches in New York and Brussels, added a director in Seoul earlier this year—HeeJin Park (formerly of local heavyweight Kukje)—and has pieces by Sarah Lucas, Anicka Yi, and others in Busan. Galerie König, of Berlin, London, and Tokyo, has worked with a team in Seoul for several years, director Dina Münzfeld said. Hanging on its booth are freewheeling paintings by the veteran German artist Karl Horst Hödicke. (Its founder, Johann König, was reported to be hunting for a space in the city last year.)

Lehmann Maupin, which has branches in New York, Hong Kong, and London, opened in Seoul in 2017 and signed on for Art Busan for the first time this year after the postponement. “The Covid situation has led us to shift our explorations into regional fairs where we can physically present and communicate directly with collectors,” the gallery’s Seoul-based senior director Emma Son said.

Art Busan was also able to facilitate quarantine exemptions for some senior-level gallery staffers, Jeong said, which secures their release from custody after a negative coronavirus test—though that can require an overnight wait in a government-selected facility.

Even with virus cases fairly low at the moment (the nation of about 52 million reported 118 new infections on Tuesday), Jeong noted that some collectors are understandably concerned about the risk of attending a fair. To contend with that, Art Busan is partnering with a company called Artland to provide 3D tours of the booths, a hybrid online-offline model touted as the first of its kind in the region. (A handful of galleries that decided against a trip to the country are also staging online-only shows with the fair, like Berlin’s Carlier Gebauer, which is putting forth works by Laure Prouvost, who had a star turn at the French pavilion at the last Venice Biennale.)

The pandemic has also led the fair to reduce attendance significantly: only 2,000 tickets are available each day. (In a typical year, organizers count around 60,000 visitors over its four-day run.) 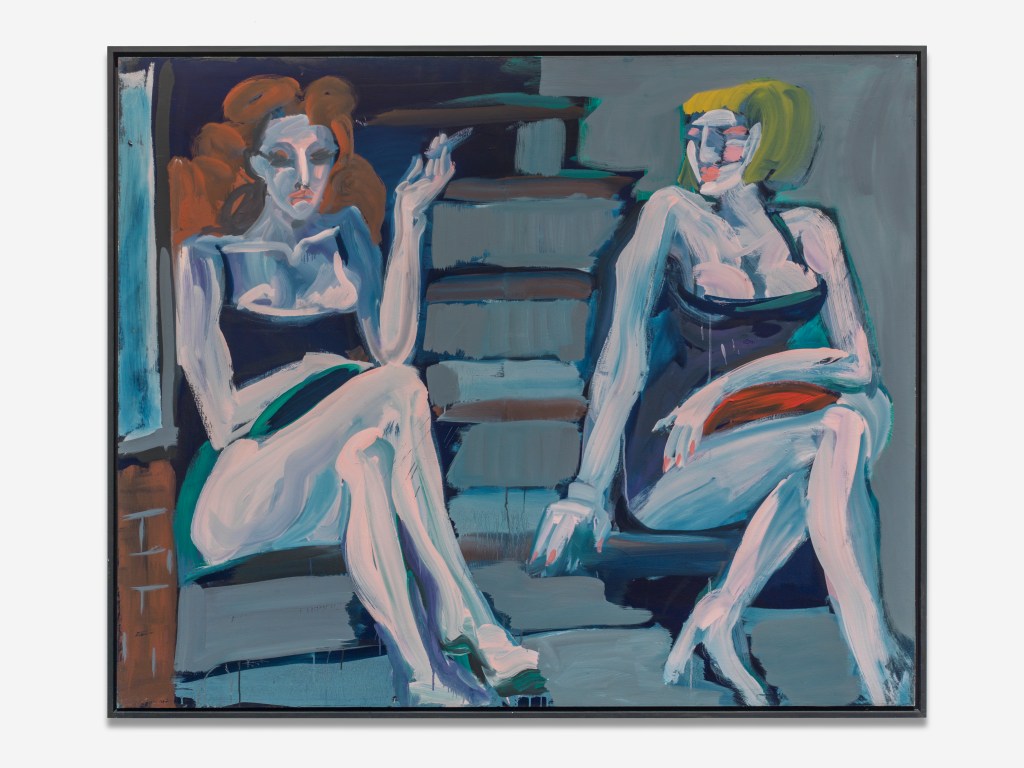 One doesn’t want to overstate it, but the chance to actually attend a fair may carry a certain novelty today. It’s an “extraordinary opportunity to present—and experience—art in person,” Lehmann Maupin’s Son said, and so the gallery “selected artists who opt for unconventional materials and textures to break down elaborate sociopolitical concepts.” She pointed to “Lee Bul’s use of mother of pearl, Teresita Fernández’s application of natural materials, and Nicholas Hlobo’s hand-stitched canvases.”

Yonni Park, a Korea-based associate director for Tang Contemporary Art, which has locations in Beijing, Hong Kong, and Bangkok, said that “in Korea, during the serious period of the Covid pandemic, the art market was completely frozen. But as the situation is getting better and better, there have been more inquiries from the collectors.” Among Tang’s offerings are works by Ai Weiwei, Wu Wei, and Zhao Zhao. 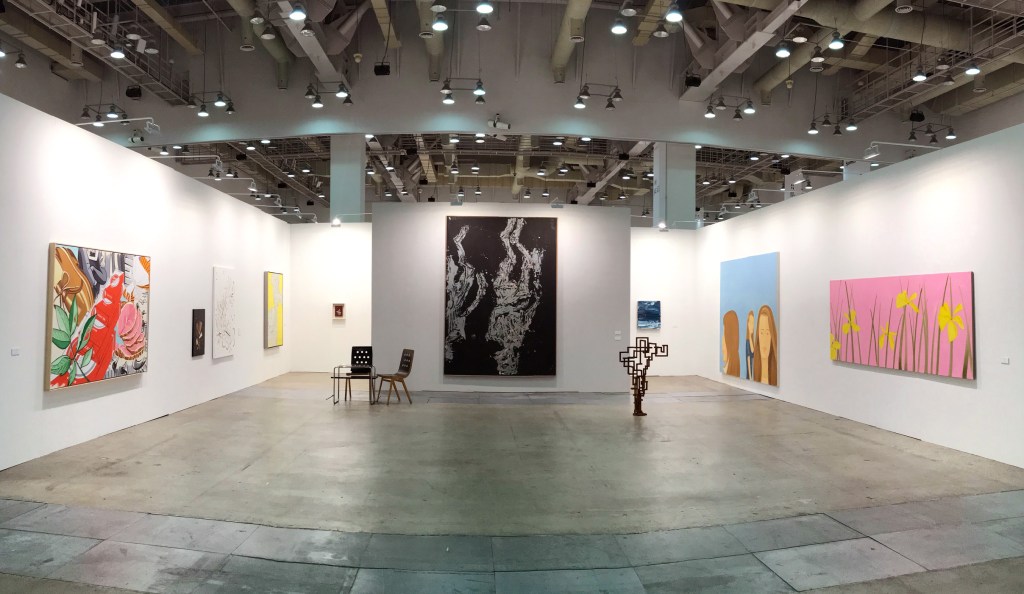 “Before the pandemic, to be honest, there were a lot of people—even galleries or collectors or whoever in the art world—feeling that they are exhausted with art fairs, because there’s just too many of them,” Jeong said. And online fairs are not ideal substitutes. “There’s just not that excitement that you receive and feel from the physical fairs, meeting people and going to parties and seeing the artworks that you are actually going to buy, yourself, in front of you.”

He is not the only one betting that others feel similarly. The weekend after Busan, the Art021 and West Bund Art & Design fairs will run in Shanghai, and at the end of the month, Art Basel will convene 22 local galleries at the Hong Kong Convention and Exhibition Centre for a show called Hong Kong Spotlight—its first in-person event of the year.