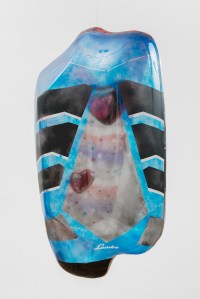 Los Angeles–based artist Ragen Moss creates sci-fi-ish sculptures in which biomorphic forms made of clear polyethylene contain organlike objects and hang from metal armatures, suggesting cocoons or alien pods. She applies acrylic paint and handwritten text to the sculptures’ interior and exterior surfaces, playing with transparency and opacity and creating dialogues within and among the works. Her solo show at Bridget Donahue, “8 Animals,” comprised eight new sculptures (all 2019) suspended from metal hooks attached to the ceiling. Most of the polyethylene forms resembled torsos and housed heart-shaped vessels.

While Moss’s sculptures resemble otherworldly creatures, she titles them after human archetypes. Some of the roles she refers to (leader, lender, borrower) have institutional functions, while others (puritan, hellcat, unteachable) are more amorphous. Her interest in social relationships was reinforced by her organization of the exhibition’s works into formal and conceptual couplings. The works in one such pair, Senior Borrower (with Mezzanine Borrower) and Senior Lender (with Mezzanine Lender, with Heart), both decorated with chevron patterns and a confetti-like spray of colored stars, hung across the room from each other, creating a call-and-response in the gallery. 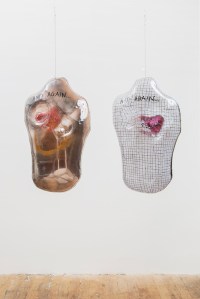 Ragen Moss: Unteachables I (with double Hearts), 2019, acrylic, polyethylene, aluminum, and steel hardware, 24 by 15 by 8 inches each; at Bridget Donahue.

In a statement accompanying the exhibition, Moss—who is a practicing lawyer in addition to being an artist—wrote that her work “ask[s] sculpture to productively press the linearity of language against the roundness of form,” and included a bullet-pointed list of notes for interpreting the show, their somewhat inscrutable quality echoed by the fragmentary texts incorporated into the sculptures themselves. Inside Senior Lender, which sports a Lamborghini logo on one side, are two hearts bearing written inscriptions: KICKER! and MANIPULATIVE DECEPTIVE DEVICE OR CONTRIVANCE. The latter phrase is borrowed from a part of the Securities Exchange Act of 1934 that refers to insider-trading violations, but in this context evokes the frailty of bodies and the heart’s metaphorical dishonesty. The polyethylene surface of another work, Puritan (with hellcat Heart), features two sunken pits dotted with dark circles, resembling inverted breasts or eyeballs, and holds a red-painted heart that reads, FIRST QUALITY. On the work’s interior wall, Moss has copied a set of guidelines about butter grades from the California Food and Agricultural Code. The text’s placement within the suggestively corporeal sculpture calls attention to the bizarre, anthropomorphizing quality of the text—one sentence reads, “the body shall be fairly firm, but may show slight defects in texture”—and nods to the way legal language can distort the relationship between human and nonhuman entities. 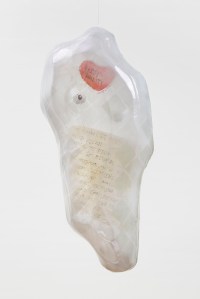 In recent years, a cadre of thinkers, notably the feminist theorist Donna Haraway, has mapped relationships between the zoological, the anthropological, and the technological. Moss’s quasi-mammalian objects offer an enticing formal analogue to these lines of thought. Her sculptures prompt reflection on dyads such as the conscious and unconscious body, parasite and host, parent and fetus. They also remind us of language’s role in shaping these dynamics—language that is not confined to science fiction, but that defines the laws that govern everyday phenomena, from financial transactions to agriculture.

This article appears under the title “Ragen Moss” in the February 2020 issue, p. 87.

Eight Great Books for Getting Through a Creative Block