Berenice Olmedo makes sculptures using debris to underscore the experiences of marginalized groups. She makes work about stray animals, as well as other populations that are often scrapped by society, including disabled and incarcerated people. For “Canine TANATO-commerce; or, the political-ethical dilemma of merchandise” (2015), the Oaxaca-born, Mexico City–based artist salvaged the corpses of runover stray dogs. She turned their fat into soap, and their skin and fur into pairs of boots, rugs, a bag, and a jacket. It’s disturbing to see “man’s best friend” treated this way—and that’s precisely the point. Animals are killed to make various goods all the time. Olmedo’s provocative gesture effectively highlights the senselessness of our speciesism, and the violence that underpins everyday objects.

For her first solo exhibition, which was at Jan Kaps in Cologne in 2018, Olmedo began repurposing secondhand orthotics. Olga (2018) is a metal armature with pastel plastic casts of two thighs and two calves that, together, make the shape of a human body from the waist down. Olmedo purchases these items from a flea market in Iztapalapa, one of Mexico City’s poorer neighborhoods, where polluted water and air causes deformities in infants—making prosthetic devices abundant. The city sends its garbage to Iztapalapa, and much of the local economy revolves around reselling refuse dug up from the mountains of trash that occupy the neighborhood. When I visited Olmedo’s studio in January, she described the scene to me as “postapocalyptic.” Most often, she buys orthotics that once belonged to children who likely outgrew them: the devices are small and decorated with playful patterns, like little yellow minions. Orthotics are custom formed to a patient’s body, so they usually can’t be reused by someone else. Olmedo honors their individuality by giving them names and personalized accessories. After engineering some ankle joints, she gave Regina (2020) ballet slippers in an effort to juxtapose the ballerina’s contortions, which are widely considered beautiful, against bodies seen as deformed. Next fall, works from this series will be included in a group exhibition exploring various aspects of childhood at the Institute of Contemporary Art Boston. 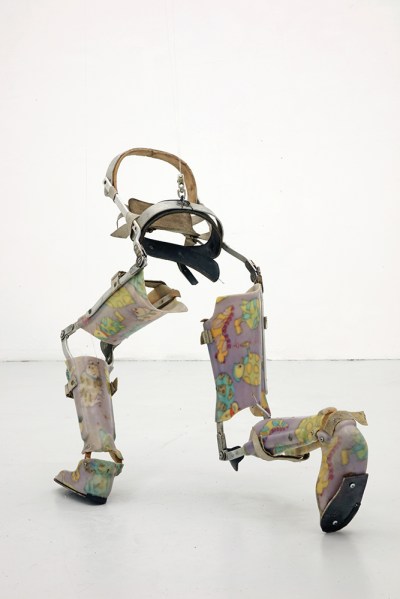 Olmedo’s studio is conveniently located next to an ortopedia, and she uses its facilities and staff expertise to turn the objects she purchases into sculptures. Olga features a motor that enables the orthotic to sit up on its knees, lie down, then repeat. “We are all born dependent and need to learn to walk, talk, eat,” Olmedo told me. The press release for her Jan Kaps show also alludes to dependency, quoting German philosopher Peter Sloterdijk on the importance of distinguishing “between chains and crutches”: between things that support and things that confine, between dependency and oppression.

Olmedo’s current project is decidedly about chains: she’s working to turn the board game Poleana—a four-player, two-dice version of Parcheesi popular among incarcerated men in Mexico—into a public monument. After graduating from the Universidad de las Américas in Puebla, Olmedo began incorporating Poleana into her work during a two-year study program at SOMA in Mexico City. She hosted a championship in the neighborhood of Tepito, where Poleana gambling plays a role in the local informal economy. The artist offered a cash prize to the winners.

Usually, in prisons, Poleana sets are informally constructed from available materials. Olmedo received a version from a friend of a friend, who had hidden it above a ceiling tile in his apartment because he found the prison souvenir disturbing. As part of her current fellowship from the Fondo Nacional Para la Cultura y las Artes, Olmedo plans to create a bronze tribute to his board that doubles as a place for public play. In the game, contestants race their chips along the board’s track—a setup reminiscent of the ways that success is often obtained through luck as much as skill.

This article appears under the title “Berenice Olmedo” in the May 2020 issue, pp. 12.