It’s easy to think of illness and disability as simply a failure or lack caused by or located within an individual’s body, rather than a condition that is also often produced systemically and inequitably—whether through a health care system that discourages uninsured people from receiving preventive care or by environmental pollution in low-income communities. Racism and capitalism help produce disability.

Doreen Garner’s huge, haunting sculptures make this last fact unavoidable. The American artist depicts gruesome historical episodes from within and beyond the doctor’s office that emphasize how racism can be a disabling force. Her solo exhibition “Steal, Kill and Destroy: A Thief Who Intended Them Maximum Harm,” at Halle für Kunst Steiermark in Graz, Austria, opens with a long view of her arresting wall-mounted construction Red Rack of Those Ravaged and Unconsenting (2018). A half-dozen hefty wads of brown flesh—convincingly rendered in silicone, fiberglass, and other materials—hang from oversize steel hooks inside an open metal armature lined with red fluorescent tubes. Occasionally, human hands and breasts are discernible where they are stapled, sewn, or pinned to other body parts with the same skin tone, suggesting the dismemberment and reassembly of Black women’s bodies. The work is immensely disturbing.

Red Rack testifies to the dehumanization of Black people, and is a result of Garner’s research on James Marion Sims, considered the father of modern gynecology, who experimented in operating theaters on enslaved Black women. Installed in Austria, Garner’s work also inevitably suggests parallels between Nazi experimentation on Jews and other marginalized groups. The artist demands that we confront these violent histories. But beyond turning Black women’s trauma into an object lesson, she also renders these bodies with extreme care in a poignant rejoinder to Sims’s painful operations: the forms are filled not only with yellow insulation foam, but also with pearls and pink and red glass beads. Garner beads them herself.

Garner’s more recent works focus on white perpetrators instead of Black victims. Two examples are on view in this show—which is thankfully sparsely hung, as each work is intense, and breaks are practically required. THE PALE ONE (2020) is a bust of a white horse. A wall text reveals that it represents one of the four horses whose riders were tasked with killing off a quarter of the population in the biblical story of the apocalypse. It’s also made with foam and pearls, as well as Swarovski crystals. Yet at first glance, the horse’s disgusting qualities arise not from the gruesome deaths to which it alludes, but from its materiality: the head itself seems to threaten microbial contamination. Its whiteness is the product not of purity but of a fuzzy “mold” spreading across the creature’s raw flesh. The point of decapitation faces viewers head on, its cavernous, shiny pink innards appearing vaginal. Garner considers this biblical prophecy fulfilled, since white people—colonists and white saviors on horses—have already disseminated diseases like smallpox around the world. In more contemporary terms, the United States and European countries continue to hoard resources like vaccines that keep them safe. 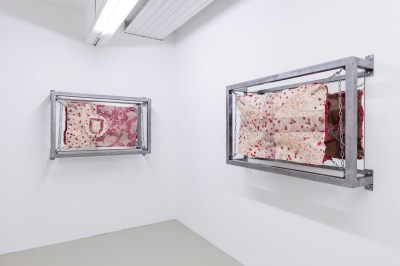 Mounting a similar critique, the two works Roughly Documented, Three Million Eighty Eight Thousand Seven Hundred and Seventy Six and Roughly Documented, Three Million Eight Hundred Ninety Four Thousand and Fifty Six (both 2021) each depict a flag—the United Kingdom’s and Portugal’s—with titles that the artist says refer to the number of Black people each country abducted, transported, and enslaved during the transatlantic slave trade. (Historians’ estimates are often much higher, but the data is imprecise.) The stripes and color blocks are assembled from silicone in fleshy Caucasian tones and pricked with textures suggesting the symptoms of illnesses and diseases such as smallpox and scarlet fever. The two flags hang several inches out from the wall in front of mirrors that reveal Black and brown flesh to be the flags’ foundations.

Much has been written, debated, and proposed concerning representational ethics and anti-Black violence, and Red Rack is a bold artistic retort. Garner’s works engage directly with both historical and ongoing trauma, and suggest the degradation of perpetrators. This approach notably stands apart from the disability justice–oriented work of other American artists, which tends to focus on access or empowerment, and resists figuration. Citing as formative the frustration she felt as a child spending time in the hospital with her disabled sister, Garner moves viewers to consider how white supremacy and imperialism cause disability, with effects that spread far beyond any individual.