Derrick Adams’s studio in a partially converted Brooklyn warehouse is a bright, tidy space: white walls, a pair of white sofas. In September, a painting hanging on one of the walls is a peephole into another world altogether: a museum gallery is decked out for a party. There are balloons, and a “Happy Birthday” banner. On the museum wall, in this tableau, is a painting of the movie poster for Mr. Soul, the 2018 documentary about groundbreaking TV producer and talk show host Ellis Haizlip and his program SOUL!, which ran on public television from 1968 to 1973, and threw a spotlight on the Black Arts Movement. In the center of the gallery are two sculptures: the late artist Elizabeth Catlett’s 1955 Target, the bust of an African American man from the collection of the High Museum in Atlanta, and a sculpture of a powerful female figure by Mali’s Bambara people. Both are wearing party hats, and the Bambaran sculpture has a blowout noisemaker in its mouth. The sole human guest at the festivities is a museum security guard, a Black woman, who blows a bright pink celebratory bubble of gum. The piece exudes joy; it is itself a celebration of Black culture.

The still-to-be-titled work is part of a new series that, for Adams, feels like a culmination of his work over the past two and a half decades, the gathering together of several strands in his practice. Whereas his best-known paintings, such as those from his acclaimed “Style Variations” series, tend to focus on individual Black and brown subjects seen up close, the new ones pull back the lens to show a wider scene; Adams calls them “more cinematic,” and sees them as being “about the urban space in some ways and also the people that represent this space. It’s a combination of everything I’ve worked on. They merge everything that I’ve done in the past and things I’m interested in moving forward, together.”

But the painting is in keeping with his desire to create an environment that encompasses Black joy. “That’s the benefit of being an artist: you can actually create the environment you want to experience every day,” he said. “This is the celebration of an event that I thought was important, and even if you didn’t know what it was or who I was interested in, you would still get a sense of the admiration behind it.”

He added, “It’s never really about just making a good painting or making a good sculpture, it’s about connecting with the audience. So I’m always picking subjects that are activated by my interest in drawing in the viewer.” 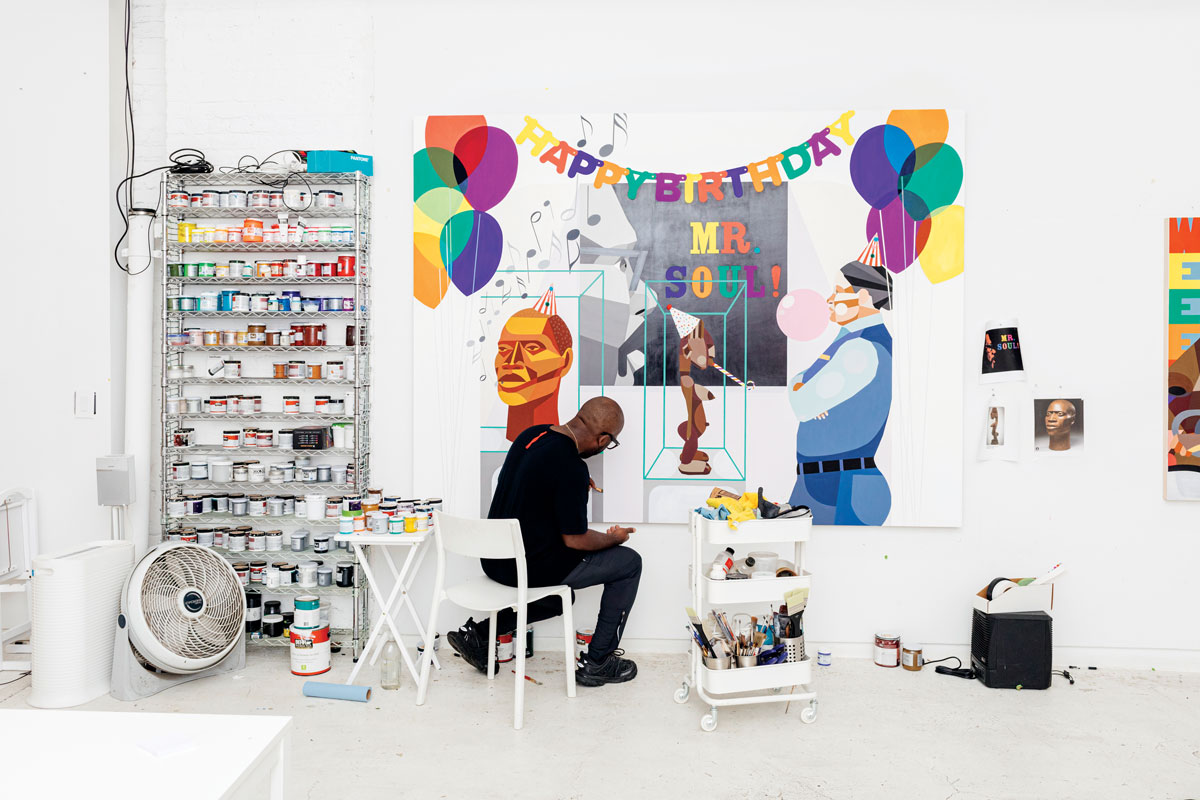 Derrick Adams at work on a new painting in his Brooklyn studio.

To anyone but the artist, the museum birthday party scene might seem finished, but for Adams it was only about “95 percent complete.” To get to that 95 percent can take anywhere from one to six months; that final 5 percent requires that he sit with the works for an additional month or two. “I like to have work in the studio to look at it for a month or two before it leaves me, because I like looking at it and learning from it,” he said. “I learn what to do and what not to do again.”

Adams is a very in-demand artist at the moment, with a full slate of exhibitions. In March, some of his new “Style Variations” went on view at Salon 94 gallery in New York; in October, he completed a mural commissioned by the Milwaukee Art Museum and the window installation at the Museum of Modern Art in New York; this month, he opens a show at the Cleveland Art Museum; a two-artist show with Barbara Earl Thomas is on view at Seattle’s Henry Art Gallery through May; next April, his traveling exhibition “Sanctuary,” which debuted at the Momentary in Arkansas, will open at the African American Museum in Philadelphia. Despite the packed schedule, his slow-food approach to art is non-negotiable. “I’ll just keep coming back to it before I take it off the wall,” he said. “There are certain things I see during that time. It’s almost like Jenga, that’s how I think about my studio practice. I keep packing stuff on top, top, top until it’s about to fall off and then I say, ‘OK, that’s enough.’” 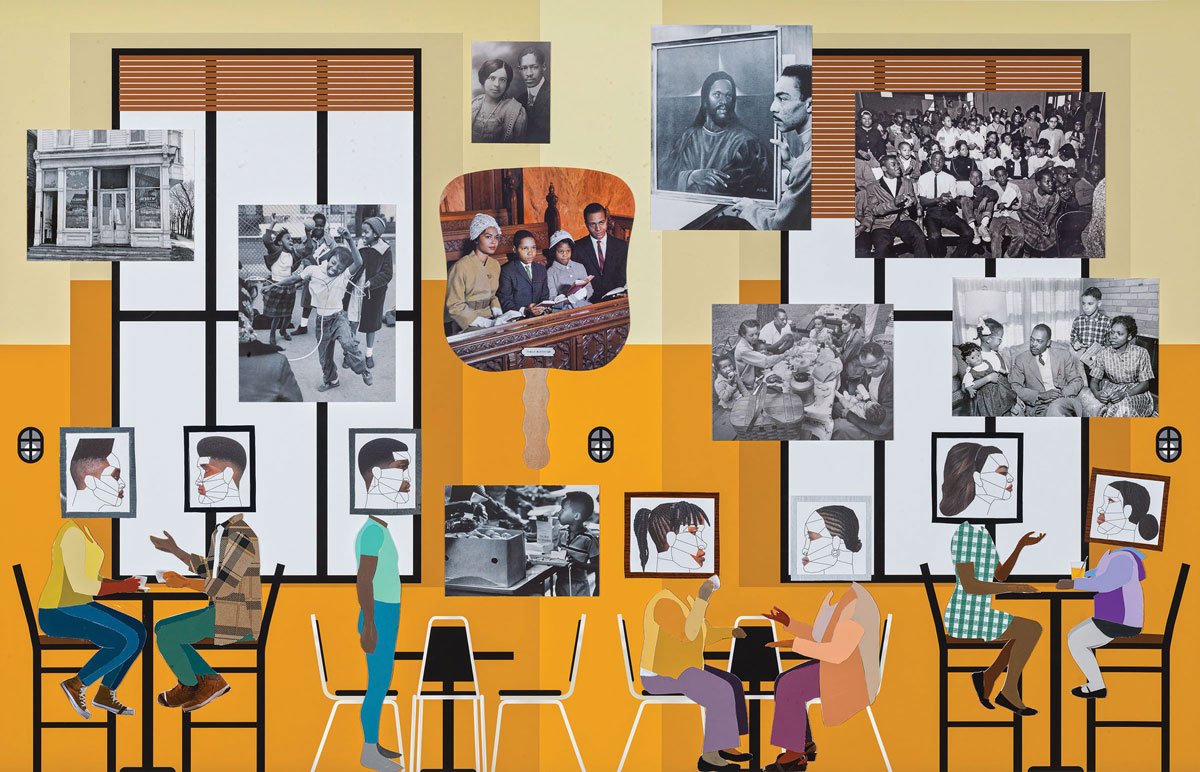 Detail of Derrick Adams’s Our Time Together, 2021, a mural commissioned by the Milwaukee Art Museum.

For Adams, the wide recognition he has received from the art world and beyond in recent years has been a double-edged sword: He worries that his paintings’ subject matter—an uplifting of everyday Black life that also references historical documents like The Green Book, the Jim Crow era traveler’s guide for Black Americans—has been foregrounded at the expense of their formal qualities. At its core, he said, his work uses “formalism—from line, color, composition—to depict the richness and complexity of Black culture.” 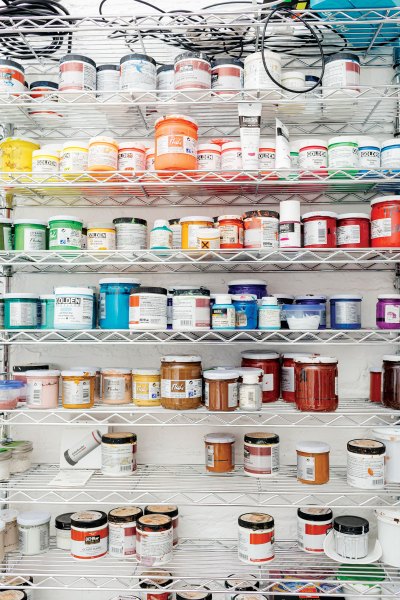 A wall of paints in Adams’s studios.

He wants to be judged by the same formal standards applied to work by white artists. Take, for instance, the Mona Lisa. “[People] talk about the mysteriousness of it, but there’s no narrative in the painting per se,” Adams said. “It’s a narrative that’s been imposed on it because people are just so drawn to the beauty of the painting and its formal execution. As a Black artist, I want that freedom and liberty for people to experience my painting on their own terms, with or without having a built-in, overly structured narrative of the Black plight attached to it.”

He continued, “For me, the challenge is, how can I execute this to the level where the work can be discussed formally and contextually? To me, that is success as an artist.”

Born and raised in Baltimore, Adams received his BFA from the Pratt Institute in the mid-’90s (last year, he joined the school’s board of trustees). In 2003, he completed his MFA at Columbia University and, that same year, had his first solo show, at New York’s Jack Tilton Gallery, which had a reputation for discovering new talent. Adams started out focusing on performance and sculpture, and later moving into collage, built environments, and then the paintings for which he has become best known. He often takes photos of what he sees when he’s walking around Brooklyn’s Bed-Stuy neighborhood, where his studio is located, other parts of New York, or wherever else he travels. These images can serve as reference images, be incorporated into his artworks via collage, or serve as the jumping-off point for entire series, as did the photos of mannequin heads he took for “Style Variations.”

With his new series, a layered approach that is often a hallmark of collage is seeping into his paintings. Though past paintings have had collaged elements, like the eyes of the mannequin heads in “Style Variations,” he said, “Collage to me is an interesting way to create a mood board of sorts of the feeling that you are trying to convey to the viewer. Sometimes, it can be things you don’t pay that much attention to in its original state, but in the collage, joined with other elements, it becomes more meaningful.” 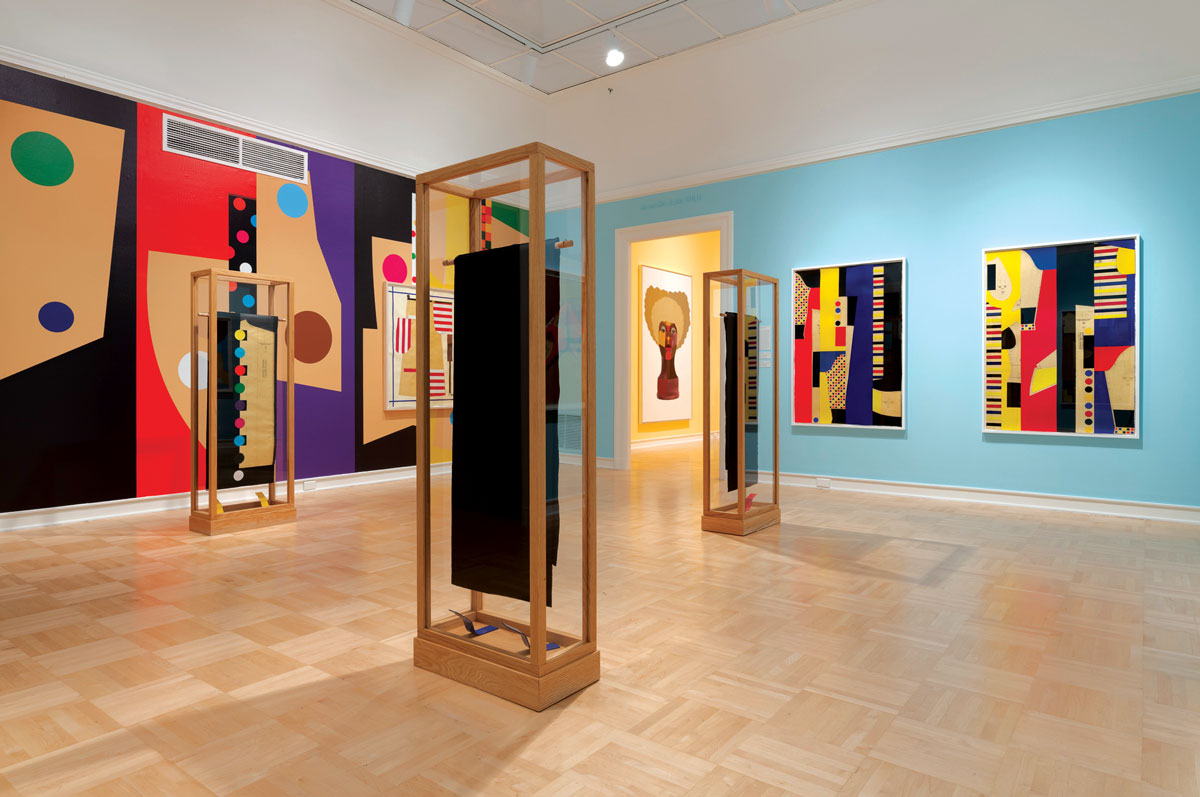 Adams hopes his slate of upcoming exhibitions will reset the conversation around his formal approach. In his show at the Henry Art Gallery, some “Style Variations” paintings will be shown alongside a series of abstract paintings that incorporate fabric, clothing, and clothing patterns, and that draw from his ongoing research into the archives of Black American fashion designer Patrick Kelly, who died of AIDS-related causes in 1990. “It was a chance to bring together two separate bodies of
the work that I had made in the studio together, but have never been seen together publicly. But they definitely influenced each other as I made them.”

That studio is a sanctuary. “When I turn the lights on in my studio, I want to see something that makes me feel good, that makes me feel hopeful,” he said. “If your interests are communicating with the people, you should empower them. I think there’s a need for it, because I need it.”

A version of this article appears in the December 2021/January 2022 issue of ARTnews, under the title “Derrick Adams Paints a Picture.”

“Forget Me Not” by Photographer Anne Moffat