“Form follows function.” Attributed to American architect Louis Sullivan, this edict pitted pragmatic design against the lofty ideals of Neo-Classical architecture. Today, artist Dozie Kanu reanimates this functionalist argument, especially its legacy in the United States. Most of his sculptures could double as furniture, though they’re shown as artworks in his first solo museum exhibition, “Dozie Kanu: Function,” now at Studio Museum 127 in Harlem. Visitors are not allowed to sit on the chairs; the bookshelves are shown without books. The young artist—born in Houston to Nigerian parents in 1993—investigates how aesthetics and purpose relate in works like Chair [iii] (2018), which has a square concrete seat and back, plus a twist: the concrete is colored pastel purple, and the forms perch atop a base made from a chrome automobile rim. Kanu repurposes motifs from his hometown’s “slab” culture of iconic customized cars sporting shiny rims and florid colors. 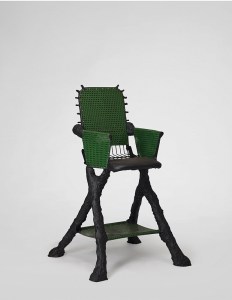 Chair [ix] (For Babies), 2019, a found high chair Kanu covered with rough concrete and a woven forest-green aluminum sheet, also takes inspiration from black urban aesthetics. Adorned with spikes, the baby chair features rich hues and tessellated patterns common to African textiles. During his first trip to Lagos, made with his mother in December 2018, he studied local organic materials. As in Houston, he repurposed the found objects of his predominantly black environs. Over the next year, he began to examine the relationship between African and American object-making, seeing his practice as an “American perspective on African artifacts” and exploring how useful everyday objects can also contain transformative artistry. 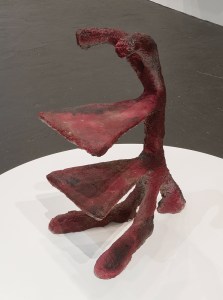 At the Studio Museum press preview, Kanu—visiting from Azoia de Cima, Portugal, where he currently lives and works—said that the pronged sculpture Juelz Santana (2019) was a bookshelf. Named after the rapper of the Harlem hip-hop group the Diplomats, it’s made with found bicycle handlebars, concrete, steel, and spray paint. Its use is not immediately obvious. Too short and narrow for storing books, too imperfect, and nearly maniacal in its tentacle-like form, the object looks more like a praying mantis than a bookshelf. Its potential function is foggy, camouflaged in part by its institutional display.

In 2017 the New York Times called Kanu a “furniture designer,” a label he’s trying to shake. Having studied production design for film and theater at the School of Visual Arts in New York, he is now deliberately abandoning the utilitarianism of furniture design for a more complicated understanding of form and function through fine art. He’s becoming more adamant, he told me, about framing his work in an art context. The art and design worlds are often at odds over the relationship between utility and aesthetic value. But Kanu muddles the usual divisions, highlighting the way black vernacular making—slab culture, African textiles—is excluded from rigid notions of what art is and by whom it is made. His work demonstrates a sensitivity to the poetics of function—the way that the everyday can contain a kind of funk that transcends practicality.

This article appears under the title “First Look: Dozie Kanu” in the February 2020 issue, p. 20.