Not long after an insurrectionist mob of Trump supporters wreaked havoc in the United States Capitol Building, a group of curators and conservators was dispatched to survey the damage done to the cultural patrimony on display there. But before they could take stock of the situation—mere moments after the violent, largely mask-free rioters ended their siege—cleaners and maintenance workers retained by Capitol Hill were deployed to sweep, mop, and vacuum the broken glass, bodily fluids, and trash the vandals left in their wake. Given the white supremacist underpinnings of the attack, it is striking that those tasked with cleaning up the ravages were largely people of color. The photographs and television footage of those essential workers show them in sharp relief against iconic American architecture and artworks, evoking a larger heritage of racial inequality in particular sectors of the economy. This race-based labor hierarchy, manifest in art imagery throughout American history, is particularly evident in Gordon Parks’s 1942 photograph American Gothic. 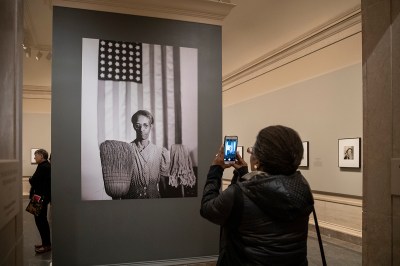 That portrait of Ella Watson, a cleaner whom Parks got to know during his tenure with the Farm Security Administration, is a stark parody of Grant Wood’s famous painting of the same name, and prods the ways in which American racial hierarchies underwrite historical disparities in labor and workplaces. In the volume Invisible Labor, sociologists Adia Harvey Wingfield and Renée Skeete argue that certain labor-based tasks are used to maintain racial divisions. Maintenance and cleaning workers “carry out racial tasks that involve protecting, servicing, and caring for the tangible physical structure in which other, higher-status workers do the interactional and ideological forms of labor.” These structures, with their long historical lineage, take on an intangible quality that makes it extremely difficult for workers of color to resist.

In American Gothic, Watson is not performing labor: instead, the act of cleaning is implied by the mop and broom that flank her figure. By juxtaposing Watson and her tools against the American flag, Parks presents an implicit commentary on the racial and labor caste system that Watson faced. American Gothic transforms a portrait of an individual into a wider representation of the enduring daily oppression of Black Americans. Watson looks neither complacent nor resistant, but simply tired—both from a physically exhausting job and the constant prejudice she faced as a Black woman in the American South. 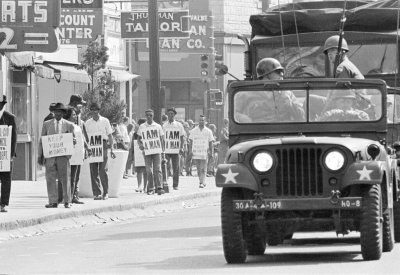 The quiet discontent expressed in American Gothic anticipated the bolder protests and strikes that were part of the Civil Rights movement of the 1960s. February 12 marks the anniversary of the 1968 Memphis Sanitation Workers’ Strike, in which 1,300 Black sanitation workers protested the unsafe labor conditions and the neglect and abuse they received from the Memphis city government. Photographs of the strike serve not only as archival documents of the movement, but also as testament to the importance of active demands for recognition. Many images show clusters of signs that proclaim I AM A MAN—a declaration that is a call for dignity and respect. Maintenance and cleaning are not inherently undignified practices, but they are cast as lowly and undignified by conventional hierarchies of labor and race.

The deployment of “essential workers” to deal with the hazardous rubble after the January 6 siege was a visual reinscription of that long-standing job bias. Comparing footage of Capitol Hill workers with historical imagery begs the question: What if they, too, had chosen to protest these unsafe working conditions? The insurrection that is rightly viewed as an attack on American democracy and its institutions also revealed subtler, historically inscribed implications. While it was necessary to sweep and scrub the Capitol Building for the safe return of cultural custodians and members of Congress—and to continue the largely ceremonial task of ballot-counting that day—one wonders if more people will now take note of the Black and brown bodies sent in to clean up the messes that white supremacists continually leave behind.