On January 17 at the San Francisco Institute of Art, Cristóbal Martínez of the collective Postcommodity spoke to A.i.A.’s Brian Droitcour about The Point of Final Collapse, a sound installation that plays every day at 5:00p.m. from SFAI’s tower. (Kade L. Twist, the other member of Postcommodity, was unable to participate due to illness.) The work is a sound collage that uses sonified data about the deterioration of Millennium Tower, a luxury real estate development in San Francisco’s Financial District that has been tilting and sinking since it was completed in 2009. The texture of the piece is inspired by Autonomous Sensory Meridian Response (ASMR), the phenomenon where soft rustling and crunching sounds induce tingling sensations that, for some, help relieve anxiety. To learn more about the work, read Matt Sussman’s review. 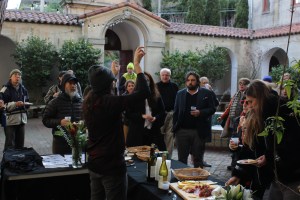 Martínez spoke forcefully about the economic inequality in San Francisco that has made the Millennium Tower an object of schadenfreude. It’s one of the richest cities in the world, but it also has a large homeless population. He said that hearing their screams was a factor in conceiving The Point of Final Collapse as a kind of balm. But ASMR anesthetizes, Martínez said: it’s part of a self-care culture that isolates people.

There’s another paradox in the technology Postcommodity uses to broadcast the work: an LRAD (Long Range Acoustic Device) that was invented to disrupt protests with painful soundwaves. They first used these devices in The Ears Between Worlds Are Always Speaking (2017), installed in Athens during Documenta 14 to play songs and stories in the direction of the site of Aristotle’s Lyceum. Weapons of silencing dissent became an instrument in a ceremony of listening. The Point of Final Collapse also adapts tools of violence for a reparative ritual, but the ambiguous value of ASMR adds another twist of dark humor.

As the head of SFAI’s Art and Technology department, Martínez advocates for creative misuse of tools that he pursues with Postcommodity. Droitcour noted that A.i.A.’s current issue, which has a special focus on generative art and artificial intelligence, features a number of artists who question and redefine the protocols of the technologies they use. For Martínez and Postcommodity, this kind of “technological sovereignty” is rooted in an assertion of Indigenous sovereignty. 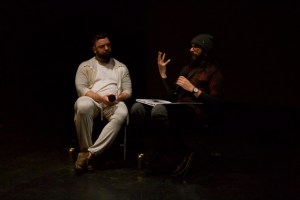 Following the conversation, guests went to SFAI’s Spanish Courtyard to listen to the work and enjoy wines provided by White Rock Vineyards.

The event was sponsored by Pangee, founded by Laura Lehmann. Pangee, french for Pangea, connects separate technologies on an integrated platform. We’re happy to partner with Pangee toward our shared goals of connection and conversation.