Jacob Lawrence, who is known for his vibrant figurative paintings focused on Black Americans’ experiences, daily life in Harlem, and events from U.S. history, is one of the most celebrated painters of the 20th century. He once said that his works “express my life and experience. I paint the things I know about and the things I have experienced.” With Lawrence’s series “Struggle: From the History of the American People” on view at the Metropolitan Museum of Art in New York until November 1 (a missing painting from the series was just found by the museum), ARTnews looked back on the artist’s pioneering career and some of his most acclaimed artworks. The guide below traces key milestones in Lawrence’s life.

Lawrence nurtured his interest in drawing and painting in his school days.
Born in 1917, in Atlantic City, New Jersey, Lawrence moved to Harlem at age 12 with his mother following his parents’ separation. Upon his arrival in New York, the artist attended Public School 89 as well as an arts after school program at the Utopia Children’s Center, which at the time was run by painter Charles Alston. Lawrence would continue creating drawings and paintings during high school before he joined a New Deal program, the Civilian Conservation Corps, for which he worked in upstate New York in the early 1930s. When he moved back to Harlem a few years later, the artist got involved with the Harlem Community Art Center, where he met the sculptor Augusta Savage, who directed the organization. It was in this period that he also met the historian and lecturer Charles “Professor” Seifert, who was an early influence on Lawrence’s work and offered the artist access to his vast personal collection of literature. Some of Lawrence’s earliest paintings, including a 1937 series focused on Haitian revolutionary Toussaint L’Ouverture and comprising 41 panels, took historical figures as their subjects. 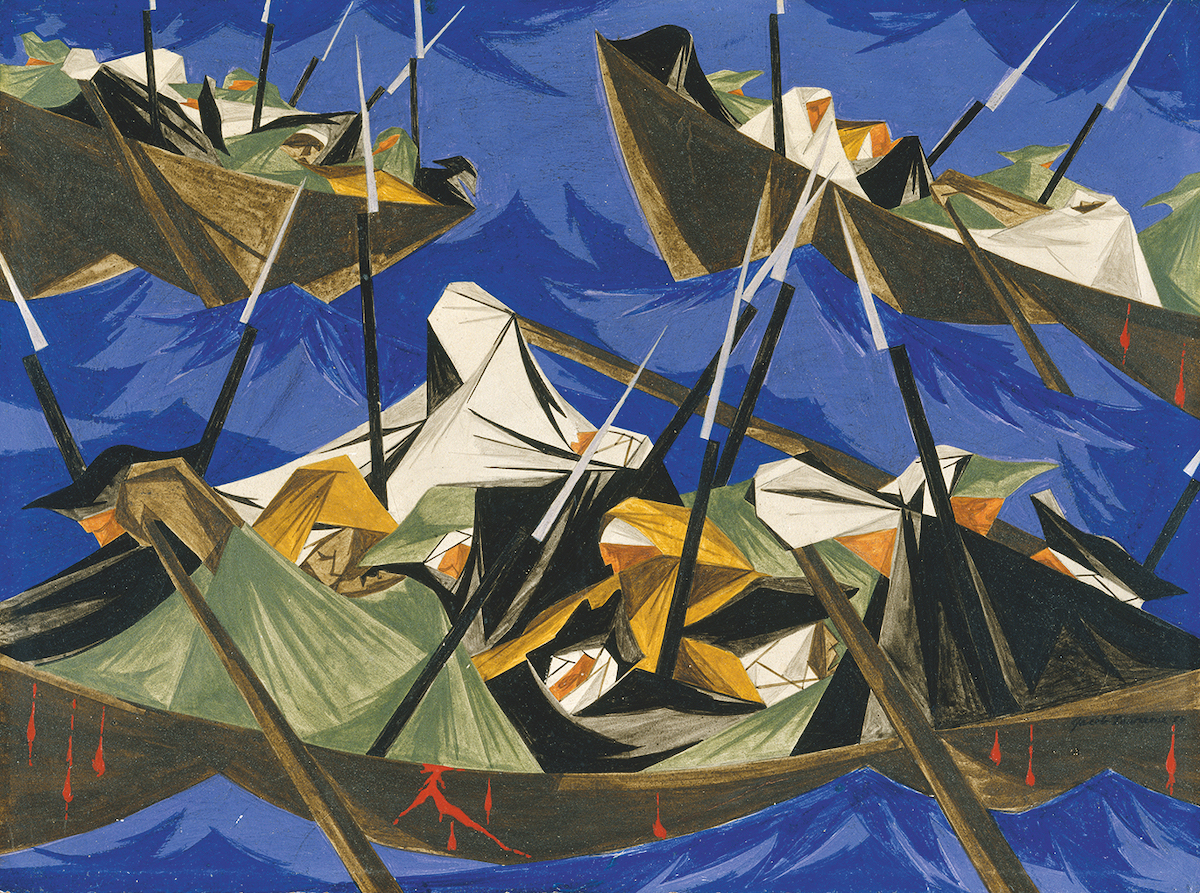 In 1938, the artist has a solo exhibition and begins working for the WPA Federal Art Project.
Lawrence showed 16 paintings at the Harlem YMCA in 1938 after he had begun painting some of his earliest street scenes, and, in an essay accompanying the exhibition, Alston wrote that the artist “is particularly sensitive to the life about him; the joy, the suffering, the weakness, the strength of the people he sees everyday.” That same year, he began working in the easel painting division of the WPA Federal Art Project. A few of Lawrence’s series from the late 1930s examine the lives of Frederick Douglass and Harriet Tubman across many panels.

Lawrence creates one of his most famous series in the early 1940s.
From 1940 to 1941, the artist worked on the “Migration” series, a key body of work in the history of American modern art that comprises 60 intimate, small-scale panels and narrates the migration of Black Americans from the south to northern cities during the first half of the 20th century. Through textual accompaniments and dynamic images, the contemplative series tells of the social, political, economic, and environmental that contributed to such migrations, detailing the journey northward and working and living conditions in cities like Chicago and Pittsburgh. The works relay the violence and discrimination directed toward Black Americans in both the southern and northern regions of the U.S., and concludes with an image of a crowded railroad platform with the description “And the migrants kept coming.” The “Migration” series was first exhibited at Downtown Gallery in New York in 1941, the same year he married the artist Gwendolyn Knight. Lawrence would go on to have a solo exhibition of paintings at the city’s Museum of Modern Art in 1944. For an issue of ARTnews coinciding with the MoMA show, Aline B. Louchheim profiled the artist, writing of his style, “Detail is suppressed except where it functions both as part of design and basic part of fact. His steep perspective generates immediacy.”

The artist taught at Black Mountain College in North Carolina after serving in the U.S. Coast Guard.
Following his 1945 discharge from the U.S. Coast Guard, which he had joined in 1943, Lawrence was invited in 1946 to teach painting at North Carolina’s storied Black Mountain College by Josef Albers, an educator at the institution. Lawrence once said that his time at the school was formative for his philosophy as an educator: “When I teach I am definitely a descendant of the Bauhaus. I don’t stress content. I stress understanding the plastic, abstract elements and being aware of what you can do with them.” Later in his career, Lawrence would also have teaching posts at institutions including the Skowhegan School of Painting and Sculpture in Maine, the New School for Social Research in New York, the Art Students League in New York, Brandeis University in Massachusetts, and the University of Washington in Seattle.

A series completed by Lawrence in the 1950s focuses on American history from 1775 to 1817.
Between 1954 and 1956, the artist painted the series “Struggle: From the History of the American People,” which comprises 30 panels and is the subject of a 2020 exhibition at the Metropolitan Museum of Art in New York. Highlighting historical events like Washington crossing the Delaware during the American Revolution, the 1770 Boston Massacre, the 1777 Battle of Bennington, and more, centering the experiences and perspectives of Black soldiers, Indigenous groups, women, and others. A painting depicting Shays’ Rebellion that had been missing from this series since 1960 was recovered in New York in October 2020 and will go on view as part of the ongoing Met exhibition; the previously missing panel will also figure in presentations of the show, which was organized by the Peabody Essex Museum in Massachusetts, in Birmingham, Seattle, and Washington, D.C. through 2021.

Lawrence exhibited work at other major institutions in later decades of his career.
The artist presented a number of landmark exhibitions in the 1960s, 1970s, and 1980s. The American Federation of Arts in New York showed a retrospective of Lawrence’s work in 1960, and a traveling retrospective opened at the Whitney Museum in 1974. In 1983, he was elected to the American Academy of Arts and Letters, and three years later he had a retrospective at the Seattle Art Museum. In the 1990s, the artist created works in gouache on paper as well as silkscreens featuring everyday scenes—like people taking public transportation or playing card games—as well as images recalling historical events. The artist died in Seattle in 2000, and today his art can be found in the collections of the Smithsonian American Art Museum, the Whitney, the Phillips Collection, and elsewhere.

Chuck Close, Photorealist with an Acute Eye for Detail, Is Dead at 81