Niki de Saint Phalle was never an easy figure to pin down. She was an avant-garde iconoclast who was integral to the postwar art scene in France. She was an imaginative public artist who supplied a number of outré creations for various sites around the world. And she was an activist who advocated for the social causes of her time, among them civil rights, feminism, and AIDS awareness.

While her many attributes are widely known in her home country of France—especially after a retrospective at the Grand Palais in Paris in 2015—they remain under-appreciated in America, where there has still never before been a major survey of her art. One such survey was supposed to open at MoMA PS1 in New York in April, but the fate of that show remains to be known. So to showcase the fascinating life and art of de Saint Phalle—who died in 2002 and was long married to fellow artist Jean Tinguely—below is a guide to her singular work.

A torrid personal life may have influenced some of her seemingly upbeat works.
In 1993, de Saint Phalle revealed in a memoir titled Mon Secret that her father had sexually abused her—an experience that explicitly informed her 1973 feature-length film Daddy (made with Peter Whitehead), in which she kills a father figure. Yet her intense biography, which also includes a visit to a mental hospital after suffering from a nervous breakdown, seems to have informed even her more extroverted and superficially happy, lending them a more hardcore feminist context than has typically been considered. With her art seen in that light, certain works come to seem like attempts to take vengeance against the patriarchy for the mistreatment of women over the years. She once wrote, “Men’s roles seem to give them a great deal more freedom, AND I WAS RESOLVED THAT FREEDOM WOULD BE MINE.”

She was kicked out of school as a child.
From early on, de Saint Phalle had a cantankerous spirit. Having been raised by Catholic parents in France, she went to school in America, and from 1942 to 1944, she attended the prestigious Brearley School in New York. Ultimately, however, she was expelled for painting the fig leaves that covered certain parts of classical sculptures lining the grounds a garish shade of red. 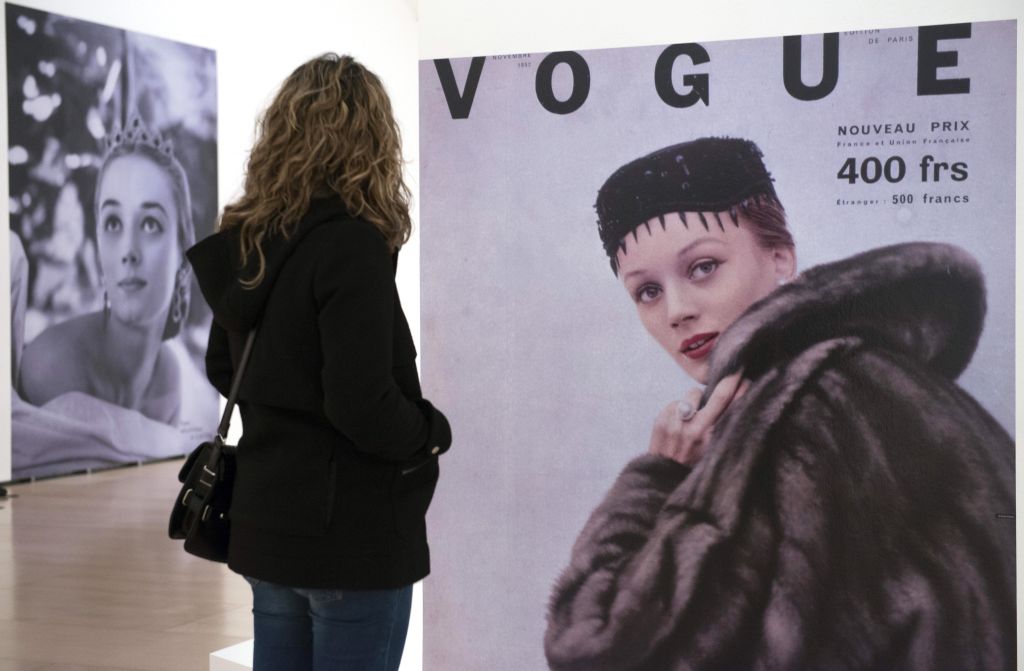 A Vogue cover featuring de Saint Phalle being shown as part of a retrospective in 2015 at the Guggenheim Bilbao.

De Saint Phalle claimed that her “Tir” paintings were not really paintings at all.
When de Saint Phalle first aimed a rifle at a canvas with sacs of paint affixed to it in 1961, she was doing something innovative—effectively making painting a form of performance art. “Performance art did not yet exist, but this was a performance,” she later recalled. At the time, painting was still regarded by many as a mainly masculine activity, and the subversive overtones of the works—a woman utilizing a phallic object to destroy a canvas—were not lost on critics. And they drew in a set of fervid admirers: critic Pierre Restany asked her to join the pioneering Nouveau Réalisme group around the time, and actress Jane Fonda reportedly attended one “Tir” performance.

In addition to art, she had a modeling career.
While she was getting her start as an artist, de Saint Phalle also graced the pages of some of the world’s top magazines. For an issue of Life, she appeared in a white gown alongside text reading, “How to make two outfits out of one.” But her guise was not always so wholesome—she also posed for more seductive shoots that appeared on the covers of Elle and Vogue. 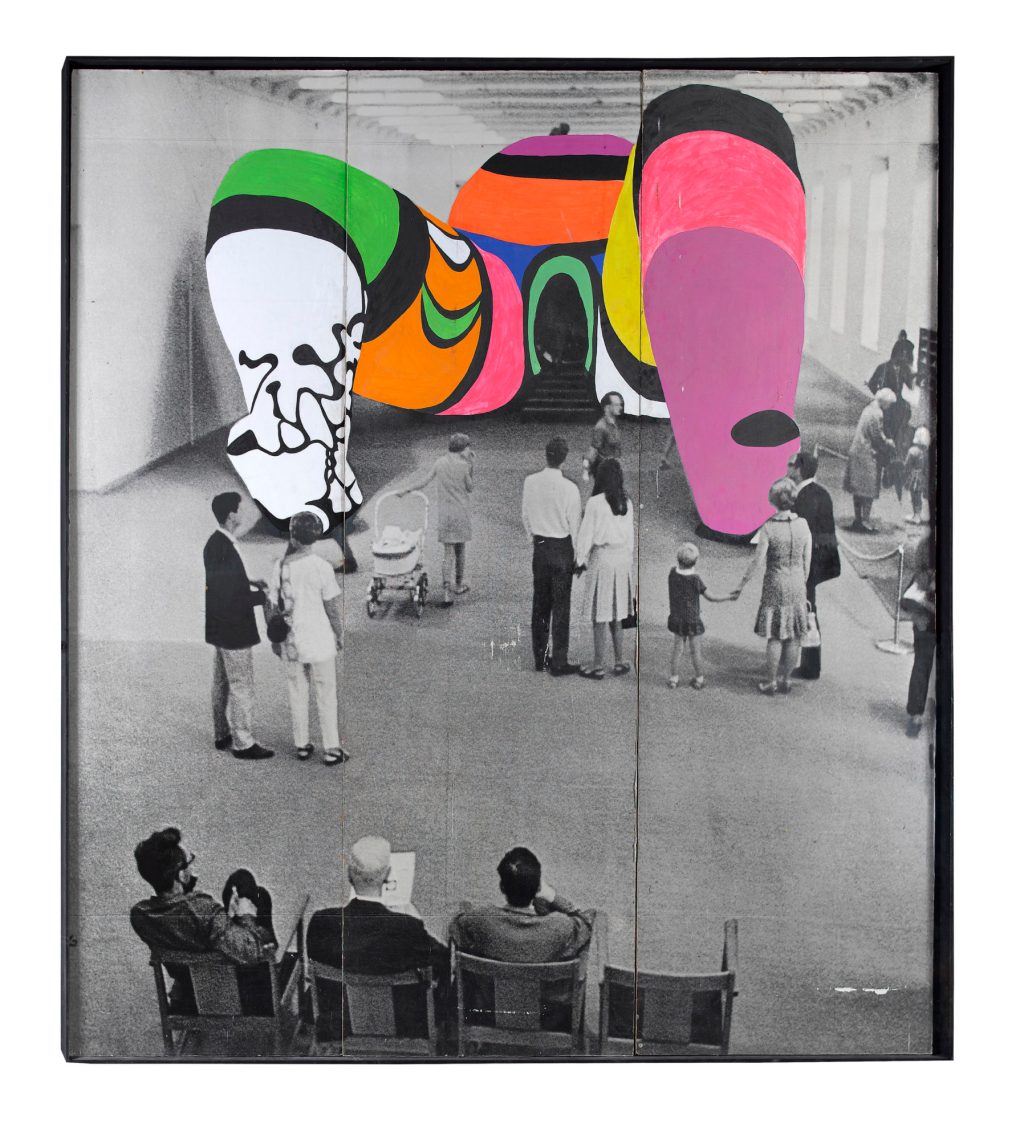 Her ‘Nana’ sculptures may not have been all that whimsical.
De Saint Phalle’s most iconic works are “Nanas,” sculptures she began making in the ’60s of buxom women with arms often raised in the air. Loosely inspired by a meeting with the pregnant wife of painter Larry Rivers, the fantastically hued works have been seen as fun and light by some critics—and dismissed by others as unworthy as a result. But they also carry potential feminist undertones. The word “nana” in French has a somewhat rude connotation, and their garish coloration may have been meant as an affront on bourgeois tastes in postwar France. Bloum Cardenas, de Saint Phalle’s granddaughter, has said of the works, “For me, it is an army of women coming to take over the world.” 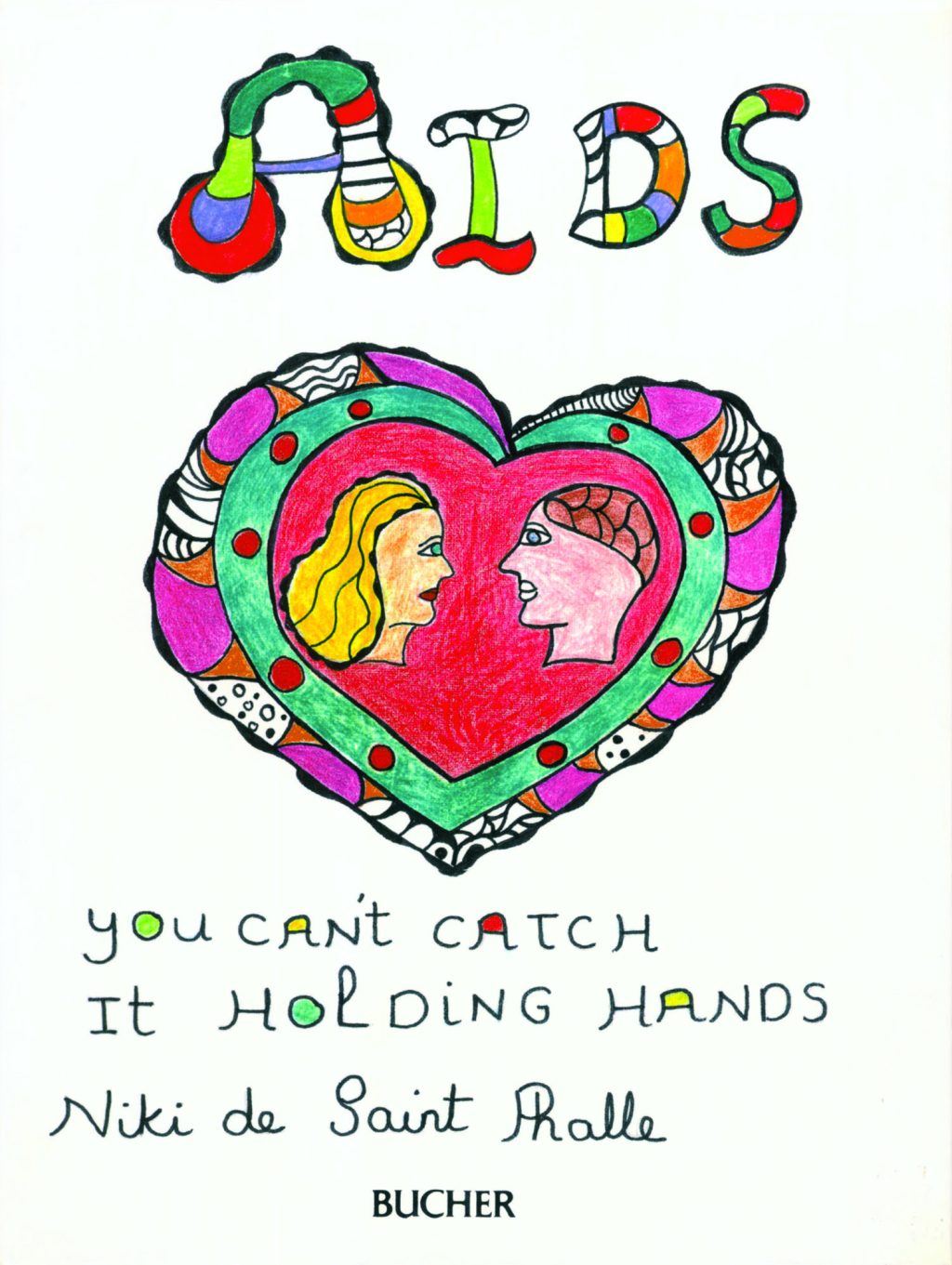 She co-authored an influential book about AIDS.
An activist streak ran through a lot of de Saint Phalle’s work—she addressed the civil rights movement and racist violence during the 1960s, for example. And during the ’80s, that spirit continued with a book about AIDS that she helped illustrate and co-write. In 1986, working with the Swiss doctor Silvio Barandun, she released AIDS, you can’t catch it holding hands, which disentangled some myths about the illness and offered tips for how to avoid it. The illustrations she created were fanciful and childlike—an approach that might seem at odds with the topic. (One picture features a multicolored snake slithering inside a condom, along with the phrase, written in cursive, “It may not be your cup of tea but it will save lives.”) Almost immediately, the book—which is now out of print—was regarded as an important text. Willy Rozenbaum, one of the doctors who discovered HIV, praised de Saint Phalle’s “optimistic message on a serious subject,” and People magazine labeled it “crucial.” 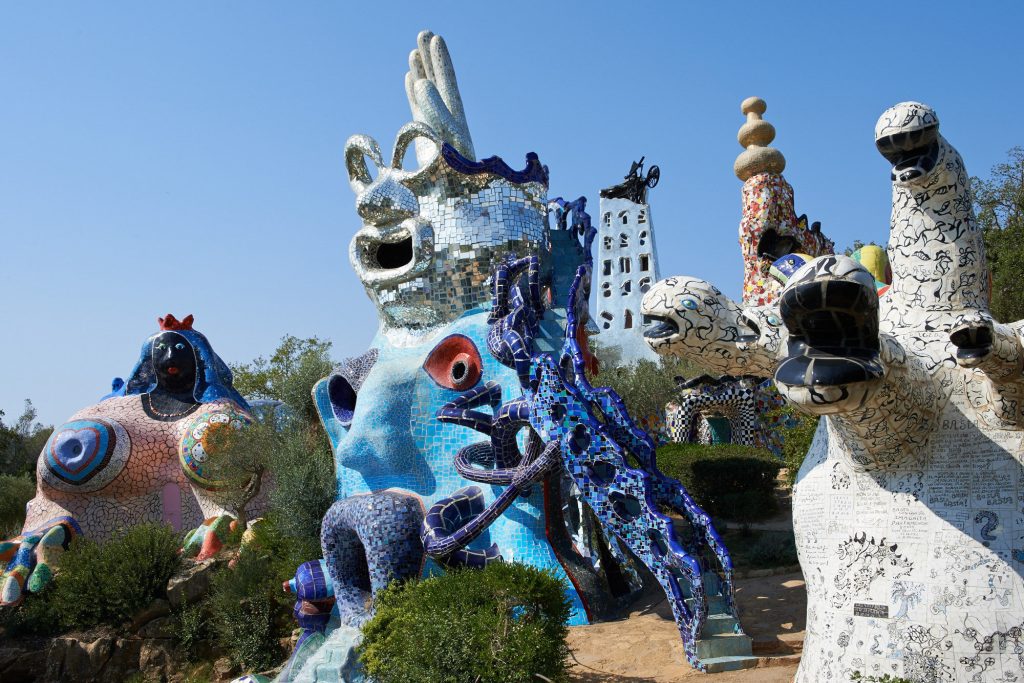 Her biggest work is a garden focused on tarot cards.
Many of de Saint Phalle’s most vibrant works were created on a large scale. The first time she made a large-scale work, it involved creating a doorway from a Nana’s pelvic region, and the Stravinsky Fountain the she created outside Paris’s Centre Pompidou museum is one of the French capital’s most iconic public artworks. But none compared, either in scale or ambition, to the Tarot Garden, a space filled with mosaics and fantastical forms in Garavicchio, Italy, that occupies 14 acres of space and cost $5 million to build. (To fund it, she sold a perfume and held a launch party attended by Andy Warhol.) Local builders helped realize the project, which has been compared to Antoni Gaudí’s Parc Güell. Those close to de Saint Phalle were able to recognize its personal underpinnings. Marco Iacotino, who worked on Tarot Garden, told the New Yorker in 2016 that the work was meant to be the sum of a creative and romantic life lived with artist Jean Tinguely, saying, “The garden was their child.”

Hard Truths: Should a ‘Serious Painter’ Stoop to Make NFTs?

Browse Hundreds of Artist’s Zines, Prints, and Other Works at the Virtual Brooklyn Art Book Fair This Weekend