Last week, it was announced that Simone Leigh would make history at the Venice Biennale by representing the United States in 2022, making her the first Black woman ever to do the country’s pavilion at the world’s top art festival. “There’s no better artist for our time,” said Jill Medvedow, the director of the Institute of Contemporary Art Boston, the museum commissioning the pavilion. What makes Leigh so important right now, and why has she risen to the status of the one of the top artists working today? Below is a guide to Leigh’s art, her career, and the ideas that guide her work. 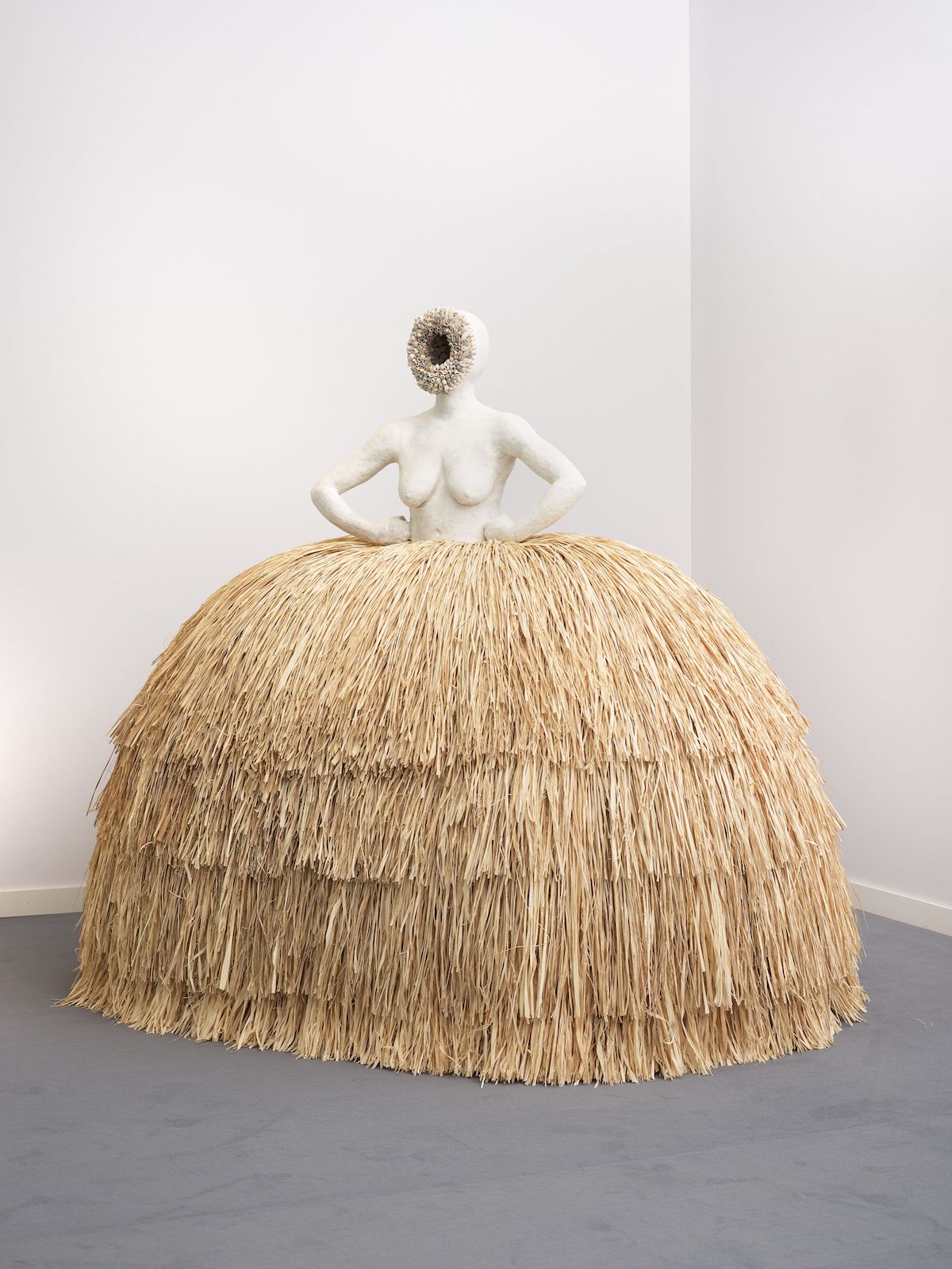 Leigh has been upfront about her work’s target audience: Black women, whose traditions, she once told the New York Times, “have been left out of the archive or left out of history.” She added, “I still think there is a lot to mine in terms of figuring out the survival tools these women have used to be so successful, despite being so compromised.”

Accordingly, whether her works take the form of monumental sculptures, performances, films, or pieces with an activist dimension, Black women have long been her protagonists. In her sculptures, which are arguably her most iconic works, the forms of Black women appear to meld with jugs and conical structures. But even when not outright depicting the Black female body, her sculptures often have corporeal qualities.

Cowrie shells have appeared frequently in her art—sometimes, they adorn her busts of Black women’s heads; at times, she creates alluring blown-up forms evocative of them. Some scholars, including art historian Huey Copeland, have said that the shells are meant to have a vaginal look to them. Leigh once told the Art Newspaper, “I would describe the cowrie shell as a stand-in for the female body, or a body in general, or a representation of an absence as well as a presence.”

To make those elegant sculptures based on the cowrie shells, Leigh casts molds of watermelons—a fruit that forms the basis for a racist stereotype about Black men and women. Leigh has also compared the negative associations of the watermelon to those historically levied against the Black body, which she once said is often considered “too large, overgrown, fat.”

“As regards watermelon, Leigh’s molds function as receptacles for transference, means of implanting knowledge of the fruit’s racial and racist associations into her objects,” curator Nicole J. Caruth has written. “In sculpting and building up the shapes, instilling in each her own views and aesthetics, they are totally transformed and offer up new frames of reference.” 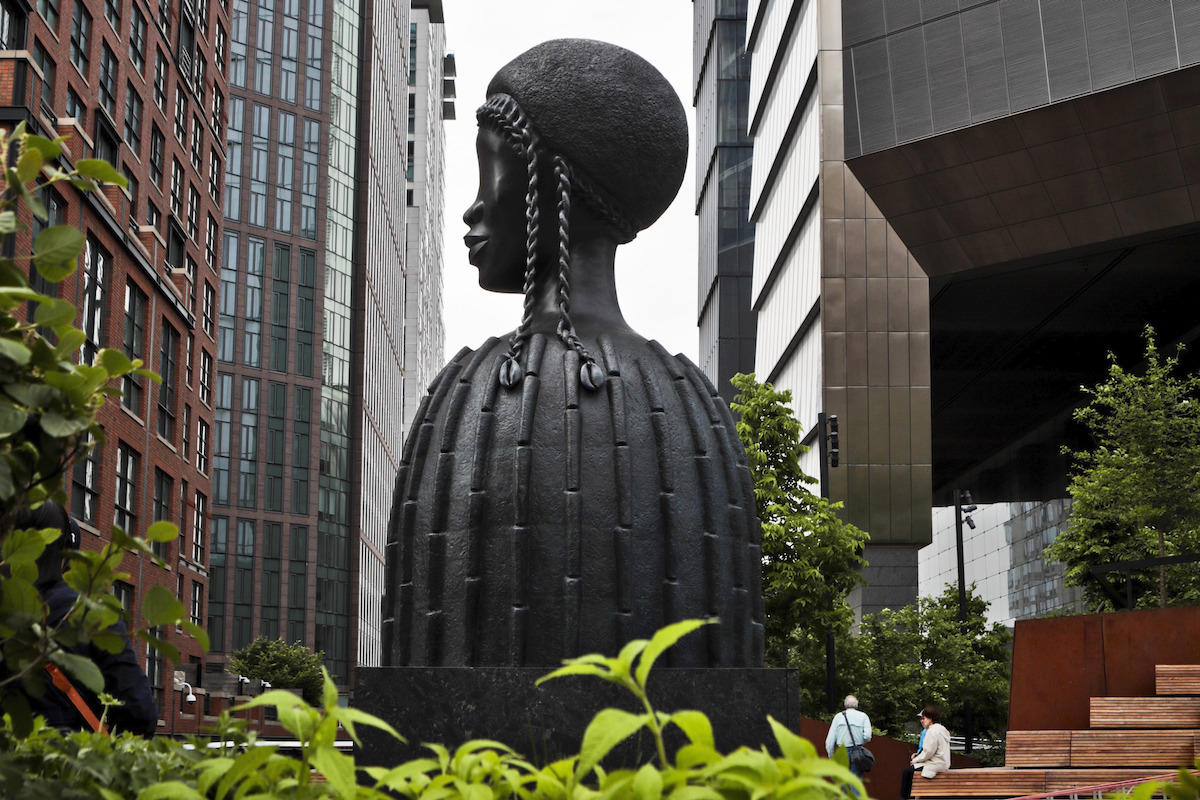 The women of Leigh’s sculptures tend to be missing features—they frequently have no ears, and their eyes are smoothed over. They are walled off from the viewer—maybe as a protective mechanism, maybe as an act of refusal. “Perhaps through their unseeing eyes we might comprehend the riddle of private and public and publics winding across Leigh’s multiple arenas of engagement,” the essayist Sharifa Rhodes-Pitts once wrote. “Perhaps it is a riddle Leigh answers as easily as she sometimes offers a entry and elsewhere seals it up.” 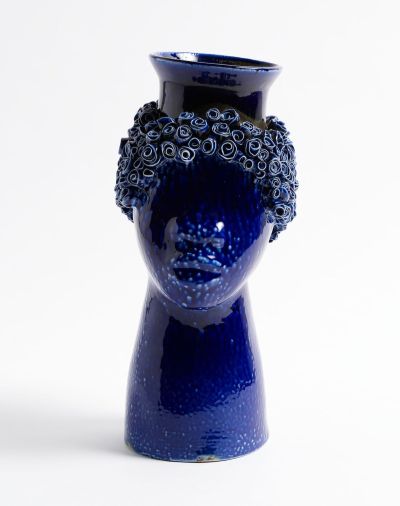 Leigh’s sculptures are mysterious—they seem to stonewall the viewer, though one gets the sense that the women she depicts contain deep psychologies that are only legible to some. The women’s quietude is a way of self-preservation, curator Helen Molesworth has written: “Her figures are not giving up their secrets. They are not there for the taking. They cannot be occupied, colonized, co-opted, or subjugated.”

But her figures conceal more than just their psychologies—they also allude to centuries of undertold histories of Black resistance against colonialism, racism, sexism, and white supremacy. Her art is often highly specific in its references, and it is the kind of work that rewards efforts on the part of the viewer to decode some of these allusions, which are often made obliquely. Many of her sculptures, for example, feature half-naked women whose torsos morph into conic forms. Back in 2015, Leigh said she based that form on Mammy’s Cupboard, a diner in Atlanta whose architecture resembles a skirt-wearing Black woman.

Although these allusions are implicit, Leigh believes her viewers need to interact with them. When Leigh showed her work at the 2019 Whitney Biennial, she hit back at white critics who claimed the exhibition—and her art—was not radical enough. If those critics were not familiar with the writings of Saidiya Hartman, Hortense Spillers, and Christina Sharpe; the history of colonialism and the Benin Bronzes; and the events that led up to the Herero Genocide in what is now Namibia, among other things, they were not equipped to converse with her art, she said in a widely discussed Instagram post. “And that,” she wrote, “is why, instead of mentioning these things, I have politely said black women are my primary audience.” 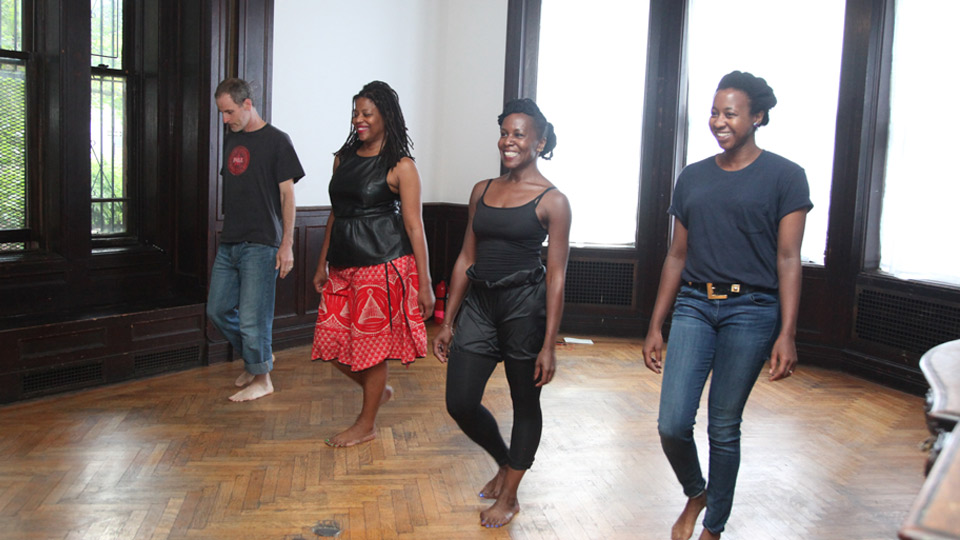 Care, healing, and self-preservation play a large role in her art.

Leigh’s most famous work, a 2014 project called Free People’s Medical Clinic, started with a historical inquiry into the United Order of Tents, a secret society founded in 1867 by two former enslaved people that convenes Black women nurses and is still in operation. Organized by Creative Time, the project that grew out of it converted Brooklyn’s Stuyvesant Mansion into a functioning medical center that offered free HIV tests, health screenings, yoga, and more to the surrounding community. It paid homage to Josephine English, the first Black ob-gyn in Brooklyn, who once worked at Stuyvesant Mansion, and to community-oriented endeavors launched by the Black Panthers. (The Asiko Art School, which is operated by the Centre for Contemporary Art Lagos without any government funding, was also an influence.)

Free People’s Medical Clinic helped put Leigh on the map, and it has endured as one of Leigh’s iconic works, even though it only exists now in the form of documentation. (The project is often classified as social practice, a kind of activist-oriented art reliant mainly on interactions, conversations, and exchanges instead of physical objects.) She later expanded on it for a project known as The Waiting Room (2016), and she has spoken about it as a form of health care that could be trusted by Black women, who have historically been disadvantaged by the current systems in the United States.

While much of her other work takes vastly different forms, the concepts that guide the project infiltrate her other pieces. “The general lack of empathy for black people is a factor in every aspect of interaction with medical providers,” she told Art in America in 2015. “It goes to the core of what is difficult to name and change in terms of structural racism and sexism.” 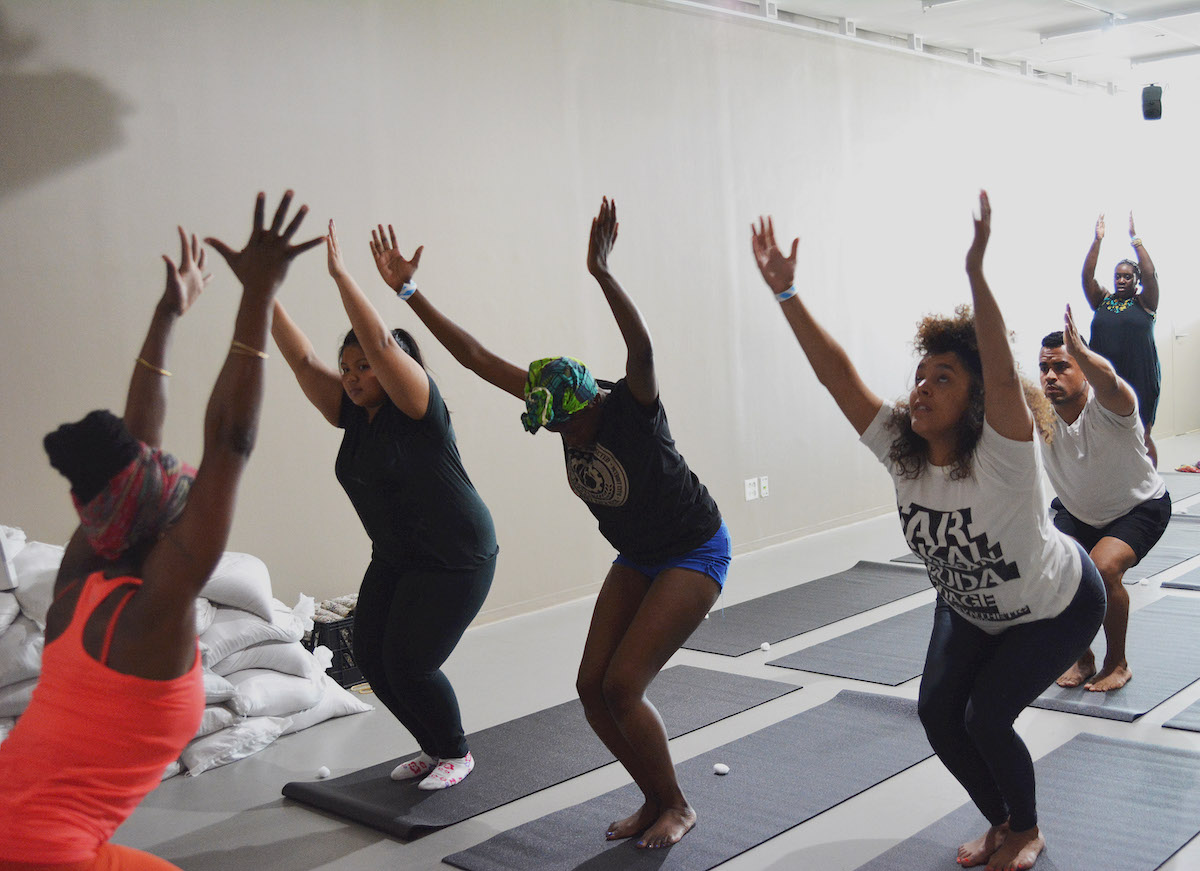 An event called “Afrocentering with Aimee Meredith Cox” held as part of Simone Leigh’s 2016 installation The Waiting Room at the New Museum in New York.

Over the past decade, Leigh has become one of the most famous artists in the U.S.

Born in 1967 in Chicago, Leigh got her bachelor’s degree in art and philosophy from Earlham College in Indiana. When she eventually came to New York, she started out creating ceramics for an architecture firm that was producing tiles for the city’s subway system. 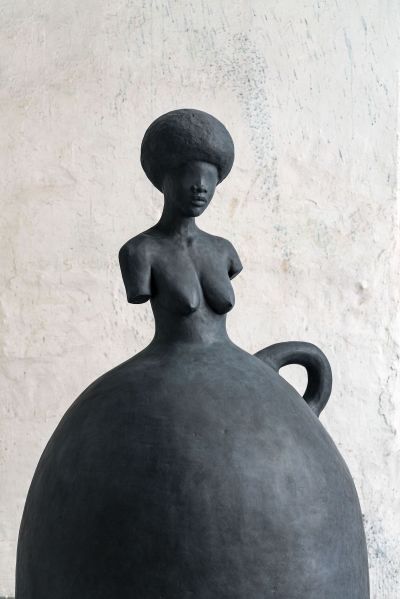 Leigh’s artistic career got some of its earliest support when she participated in the Studio Museum in Harlem’s venerated artists-in-residence program in 2010 during her 40s. She was launched to more widespread fame when she staged Free People’s Medical Clinic, and the years that followed brought her bigger solo shows at institutions such as the New Museum in New York, the Hammer Museum in Los Angeles, and the Crystal Bridges Museum of American Art in Bentonville, Arkansas, as well as presentations held via the Studio Museum and Tate Modern in London.

As her work obtained greater visibility, she began picking up top awards, such as the Guggenheim Museum’s $100,000 Hugo Boss Prize in 2018 and a $50,000 United States Artists Fellowship in 2019. Last year, she appeared in the Whitney Biennial, and she is set to take part in the forthcoming edition of the Prospect New Orleans triennial, which was pushed from 2020 to 2021. In 2019, the same year a 16-foot-tall commission for the High Line art park in New York was unveiled, she joined Hauser & Wirth, one of the biggest galleries in the world. In 2023, she will have her first major museum survey at the Institute of Contemporary Art Boston.

Her Venice Biennale pavilion is set to bring Leigh her greatest exposure to date, and she has greeted the news ecstatically. Last week, Leigh told the New York Times, “I feel like I’m a part of a larger group of artists and thinkers who have reached critical mass. And despite the really horrific climate that we’ve reached, it still doesn’t distract me from the fact of how amazing it is to be a Black artist right now.”