What explains the fact that Imogen Cunningham is still an elusive figure? She was once considered one of the greatest photographers, alongside her contemporaries Alfred Stieglitz and Ansel Adams, and during the 1960s and ’70s, at the height of the women’s liberation movement, many recognized her important contributions as blazing a trail for women who wanted to take up the medium.

But at some point, her popularity dropped off a bit. Even today, though a few U.S. museums have collected her work in depth, the full view of Cunningham’s photographic work—which runs the gamut from expressively lighted shots of flowers, to piercing portraiture shot on commission, to mysterious street photography, to experimental abstractions, and more—has largely gone unseen, which might owe to her being under-known in the decades since her death in 1976. “I photograph anything that can be exposed to light,” Cunningham, who was born in Portland, Oregon, in 1883 and was based in the Bay Area for much of her career, once said.

That all is beginning to change, as more scholars begin to turn their attention to Cunningham’s groundbreaking artistic practice. A rare complete picture of Cunningham’s oeuvre arrives in October courtesy of the Getty Museum in Los Angeles, which has issued a new book that surveys the whole of her output. (The book was intended to accompany a retrospective that was slated to open at the L.A. institution and then travel to the Seattle Art Museum, but that exhibition has been delayed by the pandemic.) On the occasion of that tome, below is a look back at Cunningham’s extensive and fascinating career. 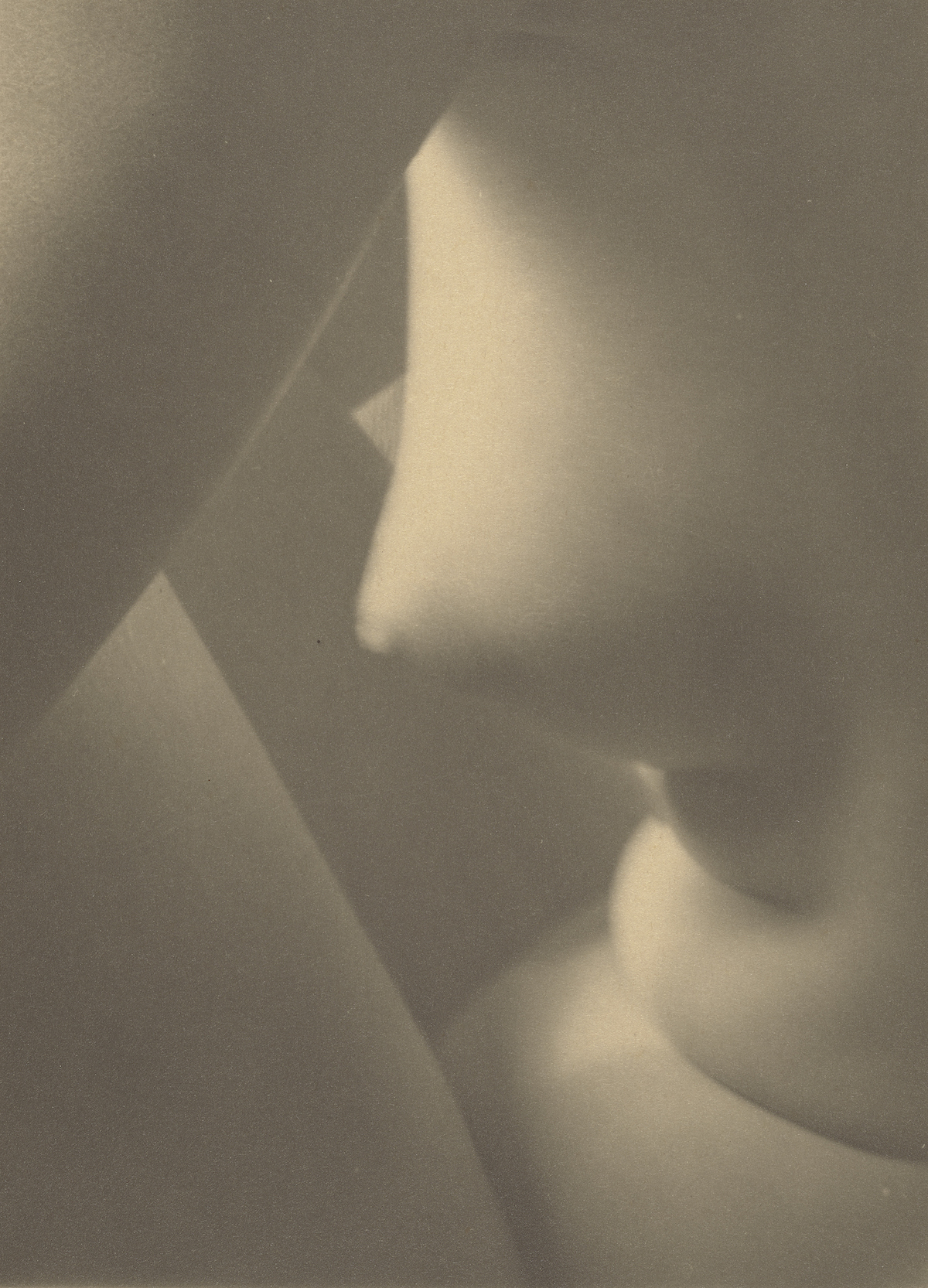 Heightened forms of intimacy were often her subject.

In 1910, when she was still not yet famous, Cunningham trained her lens on a married couple with a young child, whom she paid to model for her. She shot them near a pond, where they disrobed and stepped into the water together, the nude father guiding the child using his hand as he wades in.

Five years after the work was shot, when it was published in a publication called the Town Crier, it was decried by men and women for its nudity, with one newspaper in Seattle, where Cunningham was then based, claiming that a “whole gang of moral perverts” was involved.

Of course, Cunningham was anything but a pervert. In photographs such as the one of the nude family, she was able to create a gaze that feels tender and intimate, showing people at ease and comfortable with themselves. In another series, she photographed her husband, printmaker Roi Partridge—without any clothes—on Mount Rainier, creating compositions that appear to merge his body with rippling waters around him. About a decade later, she created shots of breasts, backs, and legs that innovatively abstract the human body into intersecting geometrical forms.

Even some of Cunningham’s photographs without any people in them evince an interest in sensuality. Her dramatically lit flower photographs from the late ’20s—her “Pflanzenformen,” as she called them—have been compared to Georgie O’Keeffe’s paintings for the way they transform floral blooms into shapes echoing a woman’s vagina. And photographs such as 1957’s The Unmade Bed, featuring rumpled sheets with hairpins strewn about, allude to carnal states without ever showing them. 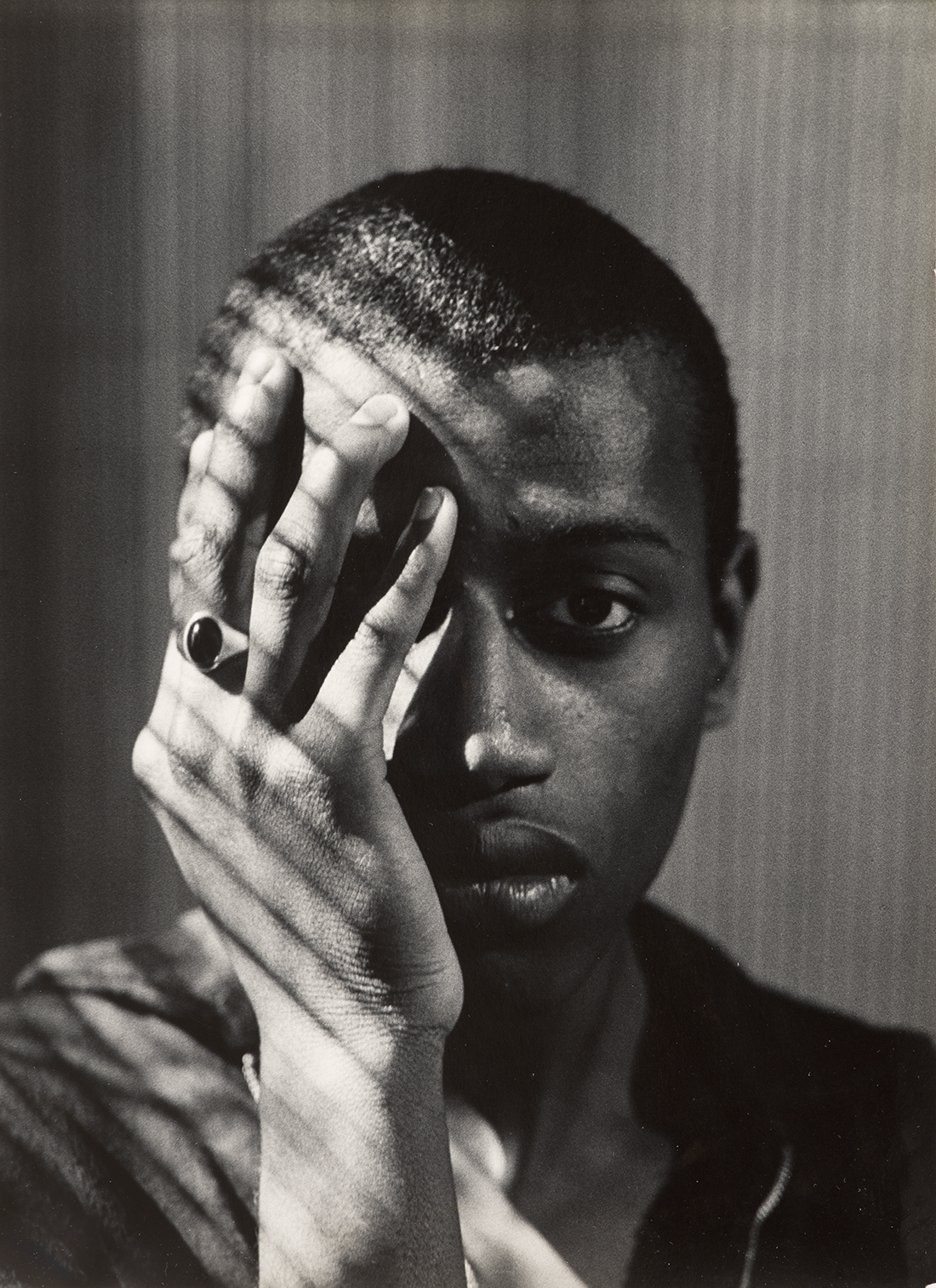 People and their psyches were complicated by her camera.

These days, Cunningham’s pictures of people are her best-known ones. Often evocative of deeply complex psychologies, they feature all kinds of figures, from actor Cary Grant to photographer Alfred Stieglitz, whose icy gaze is pierced by Cunningham’s camera. During her time, these photographs would’ve been well-known, too, with many printed by Vanity Fair. (But that didn’t mean she was paid much for them. Getty curator Paul Martineau writes that, in the 1930s, when she began shooting for Vanity Fair, Cunningham was selling her work for $10 per picture. Her colleague Edward Steichen, by contrast, was making $35,000 per year as a chief photographer for Condé Nast, the media conglomerate that owns Vanity Fair.)

Cunningham’s portraiture has often be prized for its intensity. Her photographs of the modernist dancer Martha Graham, shot in 1931, are among her most widely praised ones, even though just a handful of her pictures from that shoot have ever been printed and exhibited. In them, Graham, wearing muted colors, contorts her body and closes her eyes, as though lost in a private moment. Critics have prized the works for their eroticism.

Today, however, Cunningham’s most iconic images may be her ones featuring the artist Ruth Asawa, whose precious sculptures constructed from wire have accrued a major following. Having met Asawa through her son, Cunningham became close with the sculptor and shot key pictures of her at work. In a letter recommending Asawa for a Guggenheim Fellowship, Cunningham wrote, “To me she is what I call an unfailingly creative person and there are very few of them.” 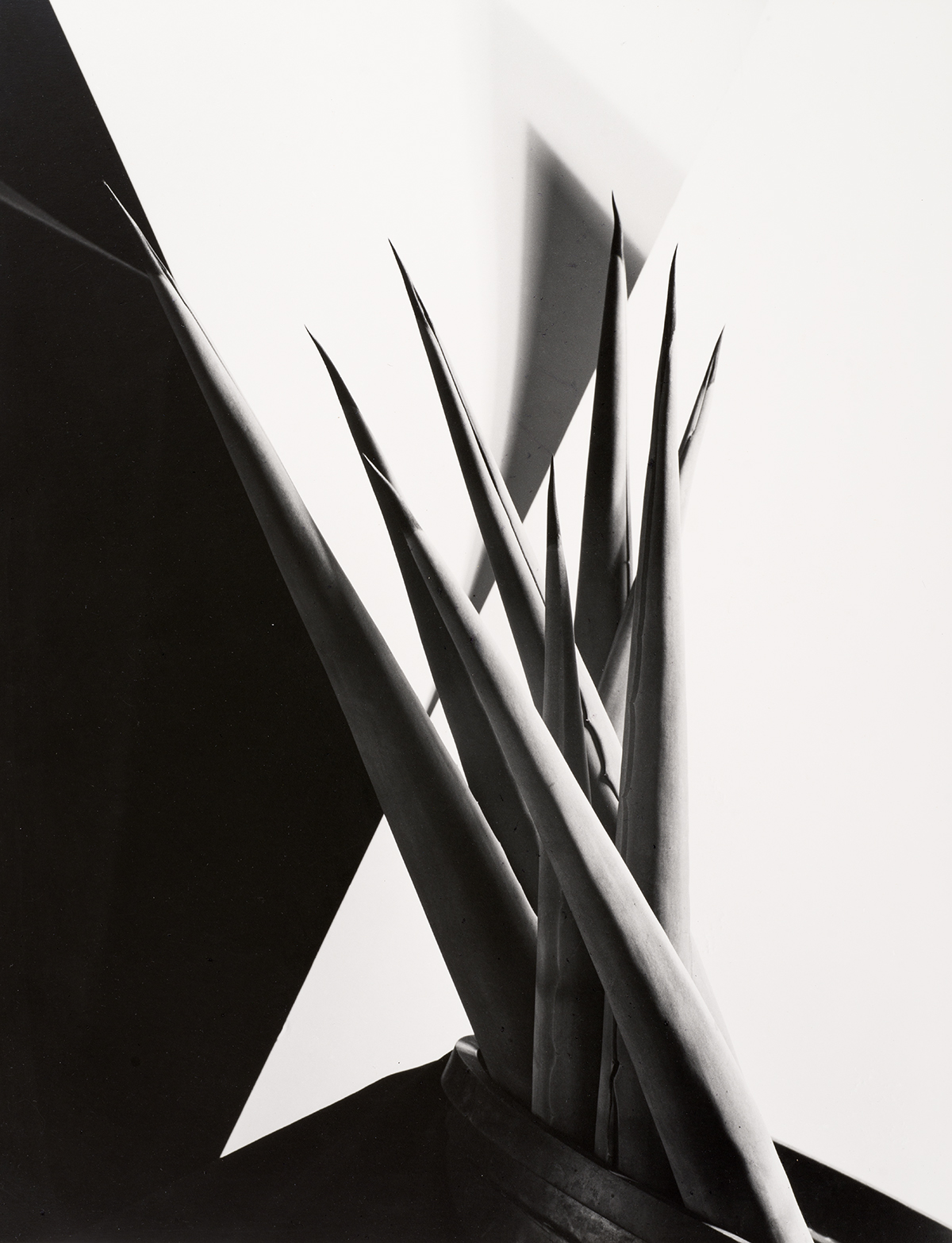 Cunningham was at the center of a key network of West Coast photographers.

Cunningham’s name is less likely to be a household one now than ones like Dorothea Lange, Edward Weston, Ansel Adams, and others, but in fact she was close with these West Coast photographers. Along with Adams and Weston, she was one of the most high-profile members of Group f/64, one of the most famous photography collectives of all time.

Formed in the San Francisco Bay Area in 1932, Group f/64 disavowed a style known as Pictorialism, which placed an emphasis on composing and engineering a photographic image over simply documenting real-world happenings. “The camera should be used for a recording of life, for rendering the very substance and quintessence of the thing itself, whether it be polished steel or palpitating flesh,” Weston once said.

Cunningham’s vibrant social network even occasionally spurred her to try new styles in her art. While teaching at the California School of Fine Arts (better known now as the now beleaguered San Francisco Art Institute), Cunningham met fellow photographer Lisette Model, who was then also facilitating courses there. Model’s preferred mode was street photography, and soon Cunningham began exploring that style, taking pictures on the sly from oblique angles—down low, off to the side—so that her subjects didn’t notice what she was doing. Cunningham called these her “stolen” pictures. 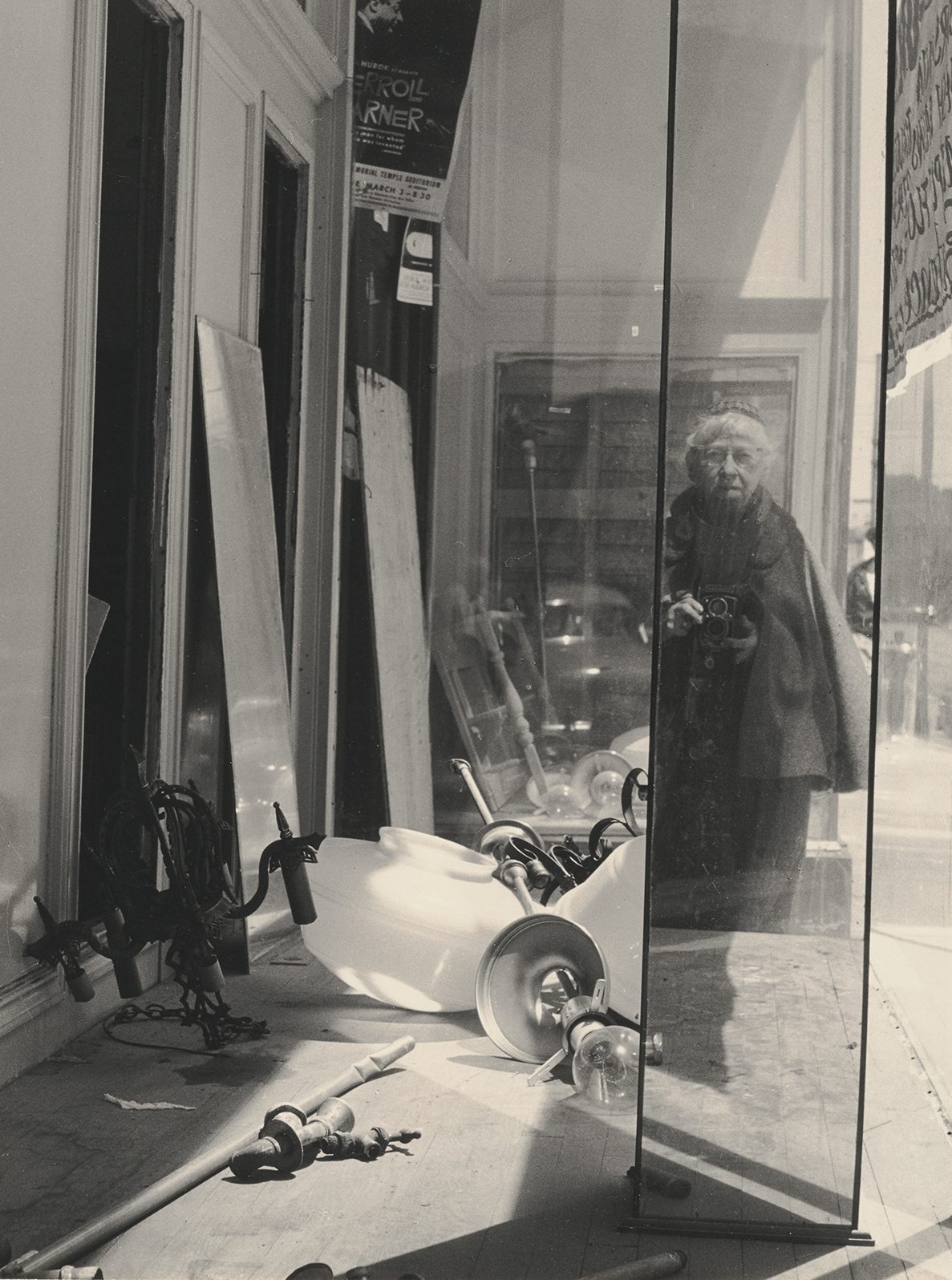 Before feminism came into being, Cunningham pushed for women’s rights.

By the time she was 90, Cunningham was considered an iconic artist in feminist circles. Having had retrospectives and books devoted to her, she was admired for having ascended to a rank historically reserved for straight white men. Yet Cunningham often expressed hesitancy about the feminist movement during the 1970s, even though she knew, as she once put it in an interview with Ms. Magazine, that she “always belonged” to it.

However much or little she aligned herself with women’s liberation, Cunningham’s views dovetailed with it. While her husband taught at Mills College in Oakland during the 1920s, she made her house a place where students could discuss forms of birth control and sexual autonomy. “Students who came to know her found Cunningham to be a well-educated and accomplished woman and progressive role model who offered them uncensored, often unsolicited advice about their academic and professional aspirations,” art historian Susan Ehrens writes in the Getty catalogue.

And, throughout her career, she also helped nurture the careers of women photographers. Early on, in 1913, she wrote a manifesto called “Photography as a Profession for Women.” She insisted that women were just as physically able to undertake the then-laborious process of shooting and developing photographs, and that the two genders had different but equally worthy forms of expression.

“The greater the independence and freedom acquired by women the less will this difference in point of view become,” Cunningham wrote. Words like these proved inspirational to women such as her Group f/64 colleague Consuelo Kanaga, who once said of Cunningham, “She was the greatest woman I have ever known in photography—generous, human, and brave.”

“To Be From The Same Tree” by Photographer Rydel Cerezo

The Sad State of the ‘Necromuseum’: Philosopher Paul B. Preciado on Restoring Meaning in Art Institutions

Andrew and Aaron of Mt. Freelance Answer Your Questions!