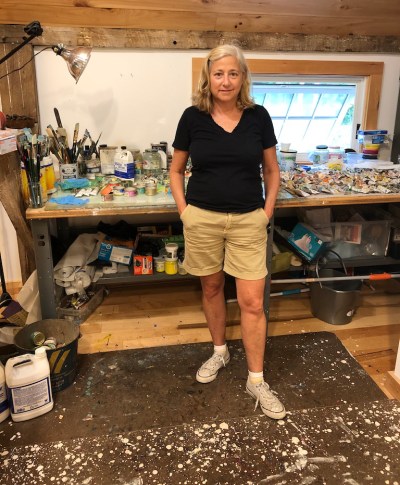 Portrait of Julia Wachtel in her Connecticut studio, 2020.

Painter Julia Wachtel has spent the last four decades appropriating advertising and popular culture imagery. Wachtel’s compositions tend to highlight wry juxtapositions of visual information: for example, a cartoon mushroom bifurcating a warehouse fully stocked with consumer goods in SuperMushroom (2020). With the onset of the COVID-19 pandemic, the artist began making short videos (all 2020). Culled mainly from television shows and commercials, they isolate and repeat specific visual and aural snippets. These videos have been featured on Perrotin Gallery’s Instagram and in the experimental online exhibition “Passing Time,” organized by curator Neville Wakefield and artist Alex Perweiler. Three of her paintings—Encore (1988), SuperMushroom, and The Astronaut (2020)—were also recently included in the group show “The Secret History of Everything” at Perrotin in New York. Below, Wachtel discusses some of the ideas behind her work and the process of experimenting with video while in quarantine.

I have had an Instagram practice—if I can call it that—for a few years now in which I post pictures I’ve seen from the television and internet that I consider research photos. The imagery can be as diverse as a patch of grass, a close-up of a Maybelline commercial, or the recent SpaceX launch. I consult these images and video fragments as source material when developing my paintings.

At the beginning of the COVID-19 shutdown, I participated in the video project “Passing Time.” I submitted two video fragments that were then displayed on the website with other artists’ work. I had never made a video before—in fact, I didn’t even know how to edit the two sequences together at the time.

I quickly became obsessed while playing around with iMovie on my computer, making almost one fifteen-second to one-minute-long video per day. My son encouraged me to use the more sophisticated editing software Adobe Premiere. But, in constructing these videos, I’m still intentionally making them in a crude way. For instance, I was working on a video and wanted to have a few seconds of a solid orange frame, but I didn’t know how to do it. I could have Googled it, but instead I started thinking of other ways to produce the color. I have a background of working in graphic design, so I used InDesign to make an orange square and videotaped my computer screen. I moved my camera in, out, and to the side to create a more dynamic shot by allowing the edge of the square to appear along the edge of the frame, which signaled the inclusion of the designed shape. Similarly, my video Stay Playful picks up on the dynamics of personified letters bumping into one another in an Oreo commercial. I isolate little moments like this to illustrate how all of these devices construct a particular language for the purpose of selling a product. Both my paintings and videos look at the language of representation in media and use devices such as repetition and speed to abstract the intended narrative and emotional tone. It has been a learning process, but I’ve found it exciting to create a variety of effects in this absurdist way of navigating technology. Even though video is a conceptual shift from my paintings, it has now become part of my process, akin to sketches. 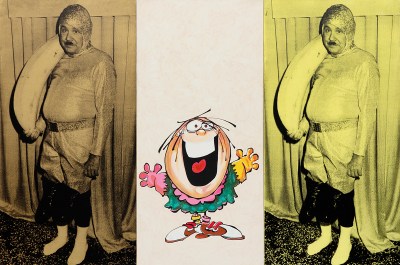 My work has always focused on media and advertisement, but being under lockdown further intensified our interface with screen culture. Technology became the only means through which we could communicate. It seemed even more potent to take things from television as it became an increasingly shared experience and a point of connection between myself and the outside world.

The videos draw on the immediacy of events happening around us—such as COVID-19, Black Lives Matter protests, and political rallies—along with more casual cultural content like HGTV’s “Love It or List It” and a Ford commercial. Master Closet Issue touches on the frivolous concerns and entitlement embedded in the white privilege displayed in a lot of television shows and advertisements. I’ve become more conscious of the normalization and hyper-aestheticizing of this type of content, particularly in the wake of the most recent Black Lives Matter protests.

In Relentless Innovation, Trump supporters are milling around, completely defying social distancing and not wearing masks, while the audio recording offers corporate double-speak on the benefits of “relentless innovation and the convergence of media, entertainment, and television.” The work points to the ways in which people are being manipulated. In their desire to uphold personal freedom, a huge portion of this population is being used as pawns by politicians and corporations alike. They want to defend their autonomy, but in actually they’re losing it.

I struggled to make work at the beginning of the pandemic. In the face of such an existential threat, I had to reconsider what can have meaning now and be in any way productive. But as an artist I feel it is my job to create meaning. I started thinking about personal protection equipment and cycled through a string of associations in my mind, including the planned SpaceX launch headed by Elon Musk. The idea behind The Astronaut, which shows a fully suited and equipped astronaut surrounded by a non-descript blue atmosphere, was to create a poignant image of entrapment—and, perhaps in some ways, it is a self-portrait about being caught between the desire for protection and the desire for escape.

The painting SuperMushroom was conceived over a year and a half ago. It’s not a response to COVID and the rush to get toilet paper and other essentials, but it now resonates in a deeper way. I have long thought about globalization and the circulation of goods. That warehouse setting of products speaks to consumerism and the massive transportation of products around the world—a huge contributor to global warming—as opposed to a localized economy. The cartoon mushroom is a cute yet heightened reference to toxicity and how unnatural our process of consumption has become.

—As told to Francesca Aton