“I’m very reluctant to talk about what’s happening now—the hot topic, the outrage of the moment. It seems necessary to ask: how did we get here?” The speaker, artist Kapwani Kiwanga, was in Paris; I was in New York. We did not dwell much, during that May 27 phone conversation, on the current political situation in the United States, where the social contract seems to be dissolving before our eyes. Yet I have gone back to our call again and again, as events have unfolded since. For anyone wanting to understand what’s happening in America now, Kiwanga’s art offers a way in; more importantly, the artist is also looking for ways out.

Kiwanga was born and raised in Canada, and studied anthropology and comparative religion at McGill University. In 2005 she moved to France, intending to pursue a career in documentary film-making. Today, moving images remain in her repertoire, along with sculpture, installation, photography, and performance. Kiwanga has won widespread recognition, including exhibitions at the MIT List Visual Arts Center in Cambridge, Massachusetts, and the Serpentine Gallery, London. This fall, she will have a solo show in Rotterdam and will exhibit work at the Centre Pompidou, Paris, as one of four nominees for the Prix Marcel Duchamp. Kiwanga has adopted the peripatetic lifestyle of many contemporary artists, often traveling to locales like Port-au-Prince, Haiti, “that could be seen to be on the periphery.” Partly this is a way of fostering transcultural encounters. Partly it is a matter of self-discovery. “It’s when you’re not in a place,” she says, “that you realize how much that place is in you.” 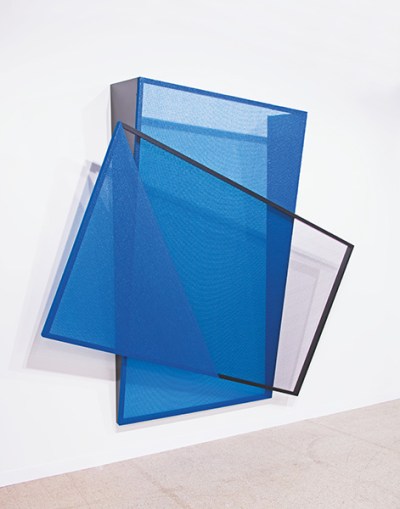 This feeling helps to account for one recent body of work, which yields insight into her own place of origin as well as her multilayered methodology. Hamilton, the midsize city in Ontario where the artist grew up, was surrounded by tobacco farms. Now sizable portions of the land have been converted to ginseng cultivation, and it is common to see greenhouses fitted with a polypropylene fabric called “shade cloth.” The canopies diffuse sunlight while permitting ventilation. Kiwanga brings multiple associations to this homey material. The fabric’s bold color and canvas-like texture are reminiscent of modernist abstraction, while its name evokes the slang expression throwing shade, memorably defined by journalist Anna Holmes as “the art of the sidelong insult,” “a compliment that could be interpreted as the opposite of one.”

The plant shelters also remind Kiwanga of Wardian cases, small glass enclosures used in the Victorian era to protect “exotic” botanical specimens such as orchids and ferns outside their home habitats. Shade cloth is a similar technology of displacement, and in this sense a political material, recalling histories of colonialism. Yet it is also perforated, and easily torn. It’s just an agricultural textile, but it seems to Kiwanga to symbolize what she’s always seeking: an “exit strategy,” which acknowledges the conditions of cultural impasse while also indicating a path forward: “a calling to go around or through.”

Kiwanga has used shade cloth in various configurations, including an outdoor sculpture called Shady (2018), resembling a room divider, and a series of smaller wall-hung works that look like twisted and tilted paintings. These compositions present an experience of visual interference, moiré patterns emphasizing the material’s function as a filtering screen. This is an apt metaphor for one of Kiwanga’s presiding concerns: the linkage between acts of looking and acts of power. On the one hand, being seen in public is a prerequisite for political agency; on the other, visibility has often meant being a target. 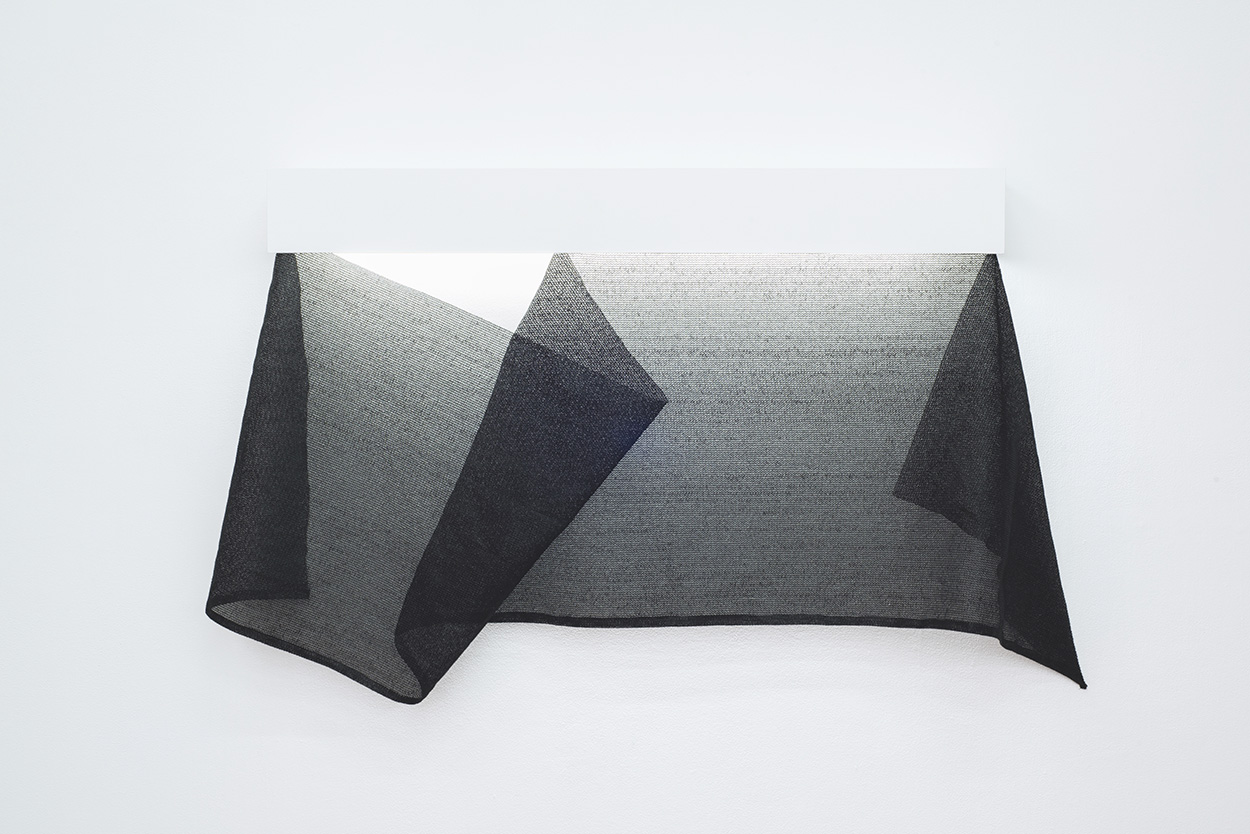 This confounding contradiction lies at the heart of Kiwanga’s series “Glow,” which consists of black, human-size geometric monoliths, each with a single embedded LED light. The sculptures allude to eighteenth-century lantern laws, as described in Simone Brown’s scholarly study Dark Matters: On the Surveillance of Blackness. These ordinances required enslaved people to carry lit candles with them by night, if they were not accompanied by a white person—a disturbing legal precedent for Jim Crow sundown laws and contemporary racial profiling. Kiwanga’s forms recall commercial lighting fixtures, but their scale and silhouette make them something far less familiar. They could have glided right out of an Afrofuturist science fiction film. 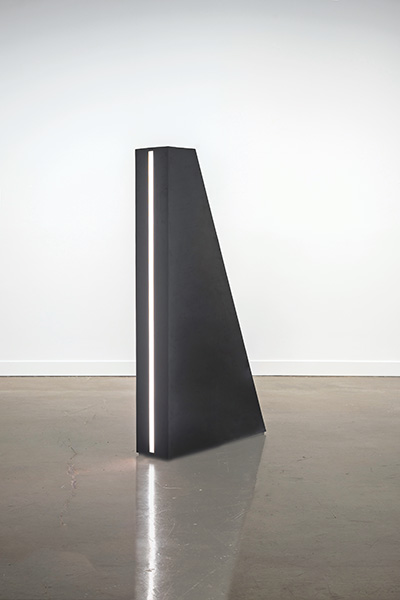 Like her sculptures in shade cloth, the “Glow” pieces make reference to the unstable power dynamics of visibility. They could be read as stand-ins for Black bodies under scrutiny, but also as watchful Black sentinels occupying the gallery. Art history is called upon here: Michael Fried’s well-known critique of Minimalist sculpture deemed it too anthropomorphic, just a literal, affectless presence in the viewer’s space. Kiwanga unsettles that reading by infusing Minimal forms with embodied, psychological and historical implications. The sculptures are anti-monuments, witnesses to a tragic history: racialized individualsve rarely been able to consider their own “presence” in the neutral terms that Fried took for granted.

Yet Kiwanga prefers not to grapple directly with art historical precedent, any more than she does with the headlines in the morning newspaper. “I have affinity and respect for those that came before,” she says, “but so much more interest in social science. Theory comes first, and then I navigate it through the body.” She made this observation in connection with her series “Nations,” sewn and sequined wall sculptures made for her in a textile workshop outside Port-au-Prince. Each includes an image from Haiti’s troubled past. Nations: Ogé’s Uprising, 1790, for example, refers to an insurrection by freemen of color—ultimately unsuccessful—that presaged the Haitian Revolution soon to come, and its eventual establishment of a free Black republic. The central image, based on a period print, shows five hands in various attitudes of attack and outreach, prefiguring later gestures of protest and rebellion. Recognition is at issue once again, this time at the scale of the state. Nations, like individuals, may be more or less visible. Kiwanga has provided emblems for a liminal condition, in which a people struggles to be seen as an entity at all. 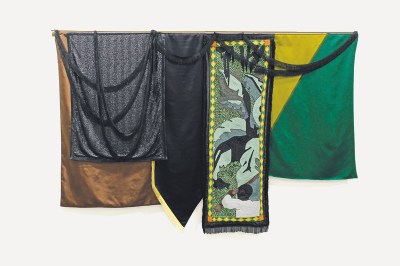 Kiwanga’s recourse to the hands of skilled textile workers, in the “Nations” series, positions the works in a vernacular context. Materially, they are very close to actual flags, including ceremonial loa (spirit) banners customarily used in Haitian Vodou (important during the Haitian Revolution as a “galvanizing force,” as Kiwanga points out). Having provided the craftspeople with a basic design and image, the artist intervened as little as possible in their formal choices, even leaving key matters like color selection up to them. There are certainly precedents for this. Alighiero e Boetti springs to mind, as does Judy Chicago. Kiwanga rejects such comparisons, though, at least to the extent that they become a “rubber stamping” exercise. She has no interest in “circling back to what has already been validated.” Indeed, this would be contrary to her central objective, which is not to draw authority from the past, but rather to mine its latent potential for disruption and departure.

For her upcoming exhibition in Rotterdam, at the institution long known as the Witte de With (it is currently undergoing the process of changing its name, inherited from a seventeenth-century Dutch naval officer involved in colonization), Kiwanga plans to once again work with artisans, reprising aspects of a project that she first staged in 2018 at the Musée d’Art de Joliette in Quebec. Titled “Sunlight by Fireside,” that exhibition explored the politics of territory. Kiwanga had a trench dug outside the museum and the dirt moved into the gallery, an act of displacement intended to draw attention to the seizure of land from its Indigenous inhabitants. Prior to her physical removal of the earth, Kiwanga hosted a sort of ritual: an open conversation by a bonfire, in which she and members of the museum staff and the public discussed the issue of decolonization. (She remembers the event as “sometimes convivial, sometimes heated.”) She then had local potters take ashes from the fire, combine them with clay sourced from the region, and make a wall of ceramic tile, formed and fired in such a way as to encourage warping, as if the material itself were expressing the stress and trauma of cultural dislocation. 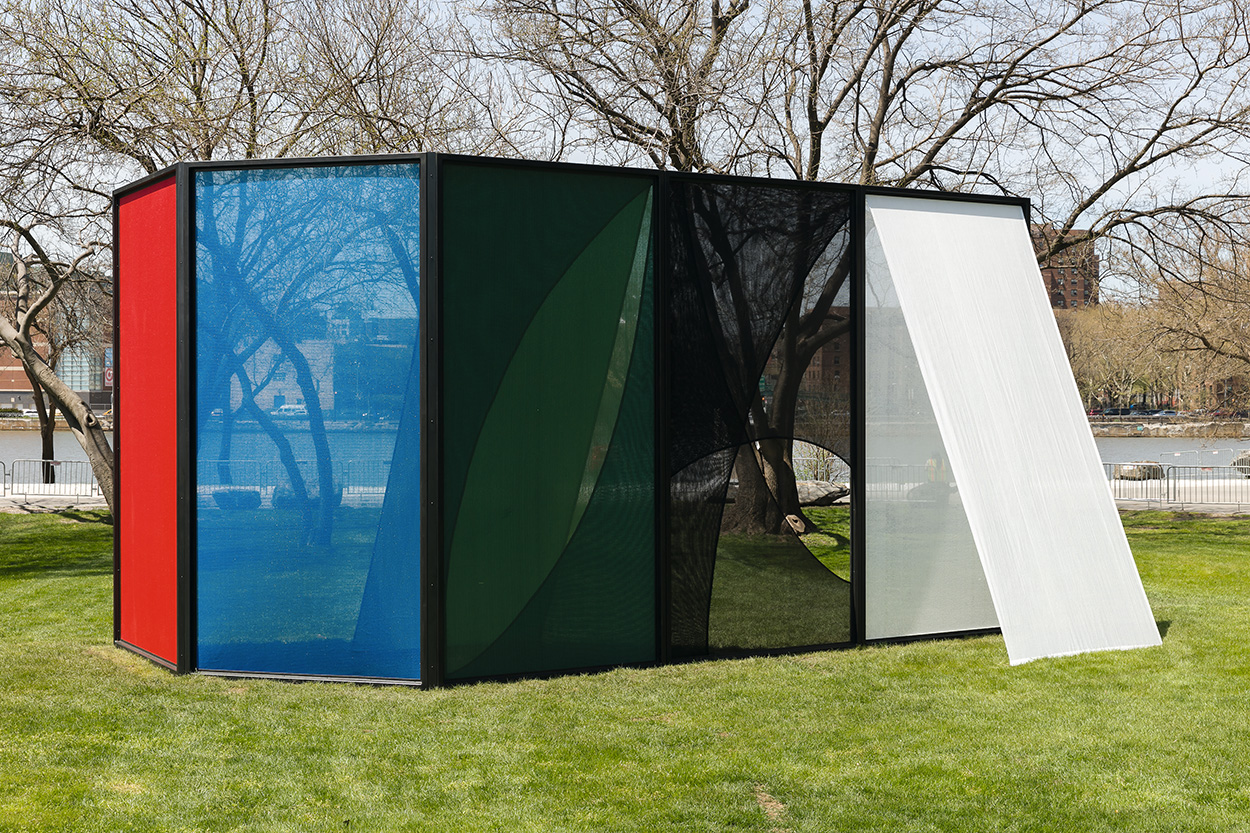 Kiwanga also plans for the Rotterdam exhibition to include a new tapestry, as well as handmade paper flowers. When we spoke in late May, her ideas about these works were still in formation, but they involved her usual mixture of historical reference, materially assertive symbolism, and associative thinking. She’d been reading about the intertwined history of slavery and vernacular botany—part of her ongoing interest in the idea of nature as “an archive”—and had discovered some amazing stories. Two from Suriname, on the northeastern cost of South America, particularly arrested her attention. One describes the use of plant-based poisons among enslaved people, either to assassinate plantation holders or to perform self-abortions, so that a child would not be born into slavery. Another tells of women who, fearing capture or forced displacement, braided rice into their own or others’ hair, carrying that seed bank with them to their uncertain future.

Kiwanga herself seemed a little uncertain when describing this subject matter, not yet sure how the narrative strands might ultimately be woven into her work. It was clear enough why she cared about them, though. If her complex and ever-evolving oeuvre has a single abiding objective, it’s to search for overlooked routes out of intractable situations. Strategic poisoners, women transporting in their hair the means of their own self-preservation: these are figures of inventive disruption, who lived in a world of horror and found a way to outwit its rules. If they could manage that, her work implicitly asks, what might we be able to do? The poet Robert Frost said it first, but these days, it’s Kiwanga who is saying it best. There’s no way out but through.

Over 2,000-Year-Old Celtic Coins Worth Millions Stolen from German Museum in Under Ten Minutes