Born in 1994, Liao Wen is one of China’s most innovative young women artists, producing emotionally fraught, semi-abstract sculptures centered on the human body, whether whole or in parts. Liao graduated from the printmaking department of the Sichuan Fine Arts Institute, in the southwestern city of Chongqing, and in 2019 earned a master’s degree in experimental art from the Central Academy of Fine Arts in Beijing. Her artistic approach crystallized in 2017, when she studied at the Puppets in Prague workshop in the Czech Republic, learning how to tell stories and externalize states of mind through the design and manipulation of marionettes and hand puppets. Her recent work focuses on the theme of bodily rituals. 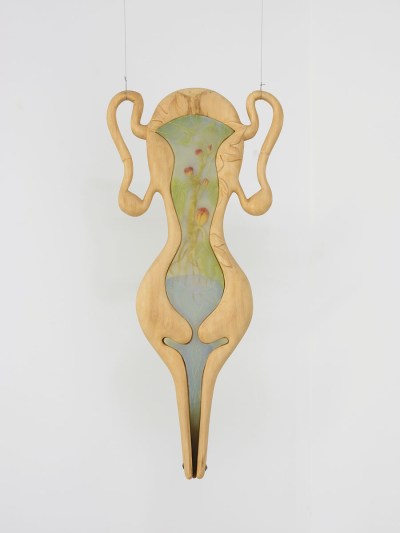 In the solo exhibition “Almost Collapsing Balance” at Capsule Shanghai this past fall, Liao presented smooth, carved-wood sculptures depicting bent and twisted bones and joints, many of them balancing precariously or supported by metal armatures. In two works, shin bones end in the shape of high-heeled shoes. Together, the pieces reflect on three erotically charged historical practices: the Thesmophoria, an ancient Greek women’s festival associated with Demeter, the goddess of grains, agriculture, and fertility; the Adonia, in which the women of Athens annually mourned the death of Adonis; and the therapies for female hysteria in Victorian England, which notably included “genital massage” administered by machines or male doctors.

Other elements in the show included a fig tree enclosed in a wooden womb, dabs of myrrh, and silicone versions of decaying fish. Liao’s interest in these materials and activities, with their dialectic between the corporeal and the ideal, stems partially from her search for stability amid a sea of disordered information during the Covid epidemic—a condition she associates with a present-day absence of genuine community and ritual. Reflecting on her “primordial motive” on the eve of the exhibition, Liao said the works concerned “love and hurt in relationships, motherhood, survival instincts, or passion.”

Liao has also expressed her interest in body-related social issues in interactive projects and performances. She launched “Birds of Passage” in 2019, an extended action addressing the physical and psychological dislocation of the nearly 300 million migrant workers in China who have moved from rural areas to big cities in search of a better life. The artist invited various uprooted individuals in Shenzhen, one of the country’s largest migrant cities, to make self-portrait puppets that they could individually name and dress. Liao then encouraged the participants (whose personal stories are otherwise largely overlooked) to take the finished puppets to places that have been—or that they hope will be—especially meaningful to them. 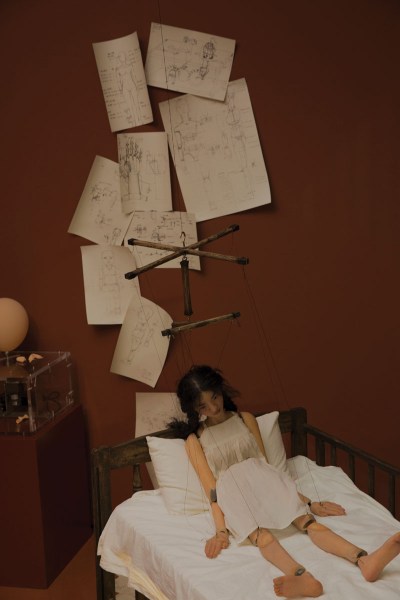 Her Room in the Dream, 2018–19, installation and performance.

The artist’s wish that migrants be treated as more than statistics was evident in her reflection on the process: “As the participants were painting faces and sewing the arms of the puppets, I clearly observed that they were not just looking at a puppet. Instead, they were looking at themselves, their minds roaming through the past, present, and future.”

Some of Liao’s works, in addition to raising social issues, evince her inward self-exploration. For Her Room in the Dream (2018–19), which has appeared in group shows at the Duo Yun Xuan Art Center in Shanghai and the Chengdu Contemporary Image Museum, the artist made a puppet based on her own image. By placing this scaled-down version of herself in a room filled with private objects such as manuscripts, an old refrigerator, a television set, and models of internal organs, Liao disclosed to the audience a delicate and highly sensitive inner world.

In the work’s inaugural version, as a graduation project at the Central Academy of Fine Arts in Beijing, the artist herself entered the room to become the puppet girl’s master, her performance videotaped for subsequent iterations of the piece. At the end, Liao held the marionette with all the strings cut, and bid farewell to this dim space, as if escaping from a dream.

The Best Art and Craft Tools for Alzheimer’s Patients