Few legacies of any kind are as ripe for misunderstanding or dumbing down as that of the impish and cerebral artist Marcel Duchamp—which makes the arrival of a new documentary about his life and work a potential cause for consternation in the best of times. But fear not: Marcel Duchamp: The Art of the Possible—a feature-length survey with commentary from starry but also scholarly names directed by the self-described “sculptor and filmmaker” Matthew Taylor—is a smart, searching, and sophisticated consideration of an artist whose specialty was to scramble signals and then venture into scrambling them some more.

“I have forced myself to contradict myself in order to avoid conforming to my own taste,” reads a quote from Duchamp at the start—setting up the mix of indulgence and asceticism that would seed his work over the decades from the 1910s until his death in 1968. As director, Taylor (whose wide-ranging credits include fine art of different kinds as well as work in technology and fashion) displays a sharp comprehension of that central paradox while also showcasing a keen visual sense in a documentary format that can all too easily be dull and dry. A brief superimposition of vintage film footage of a naked woman walking over top Duchamp’s epochal early painting Nude Descending a Staircase No. 2 makes a powerful point in just a few seconds, and a brief vignette extolling the virtues of poetry and language makes the subject come alive with imagery of words digitally wiggling on the screen.

Some of the commentary can be breathless and overextended. (“Without him, imagine where we’d be,” one talking head states near the top. “We’d be painting in the style of Matisse or Picasso. That’s what modern art would be without Duchamp.”) But the much more common register is rigorous engagement with complex ideas and an impressive commitment to imparting those ideas to an audience not already intimately familiar. Linda Dalrymple Henderson, an art historian at the University of Texas, tangles nobly with explaining the sort of metaphysical “fourth dimension” that was integral to Duchamp and many other artists and thinkers in the early 20th century. And soon after, the process by which Duchamp made his 3 Standard Stoppages—a famous work that incorporated chance operations in favor of the control of the artist’s hand—gets described as “a para-scientific operation.” 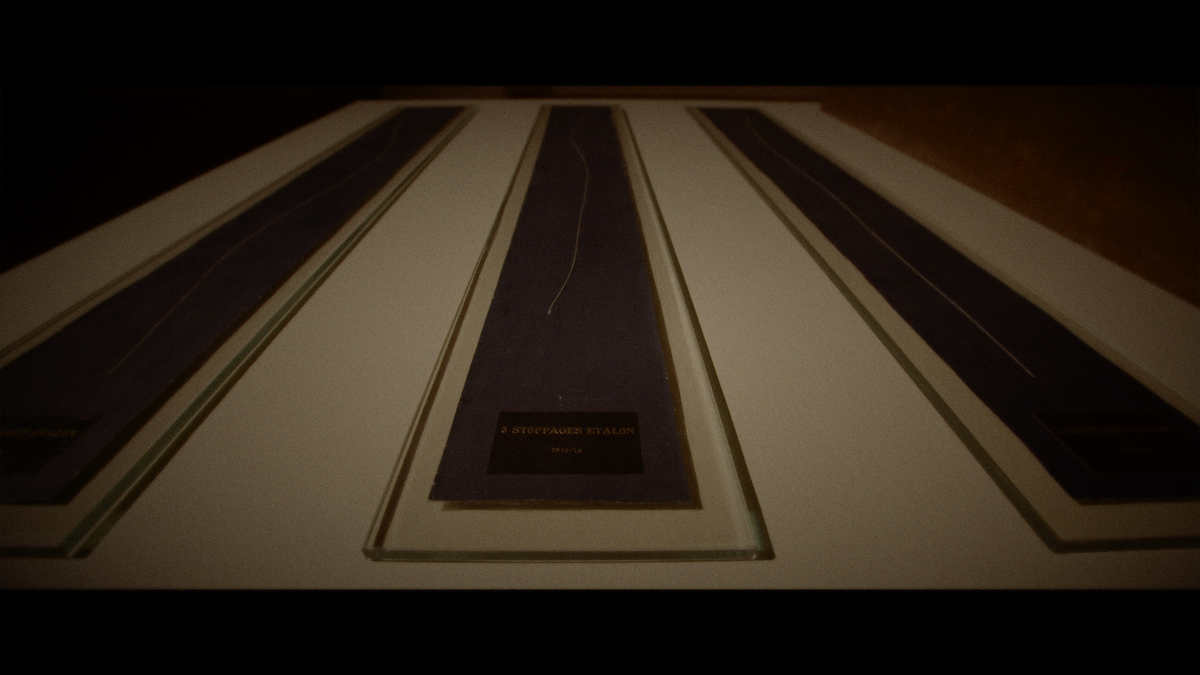 3 Standard Stoppages in Marcel Duchamp: The Art of the Possible.

The cast is varied, with appearances from artists including Jeff Koons, Joseph Kosuth, Dove Bradshaw, Alison Knowles, Ed Ruscha, Carolee Schneemann, and Hiroshi Sugimoto, among others. But scholars and museum heads are the real stars of the show, doing the heavy explanatory lifting with more than a few moments of avowed experts actually thinking out loud. Then there’s footage of Duchamp himself putting a damper on such activities while spurring them on simultaneously. Talking about the protracted on-and-off time he spent working on his enigmatic masterpiece The Bride Stripped Bare by Her Bachelors, Even (The Large Glass), Duchamp, wry and self-erasing in old black-and-white, says: “I got tired of it after eight years of this stupid work.” 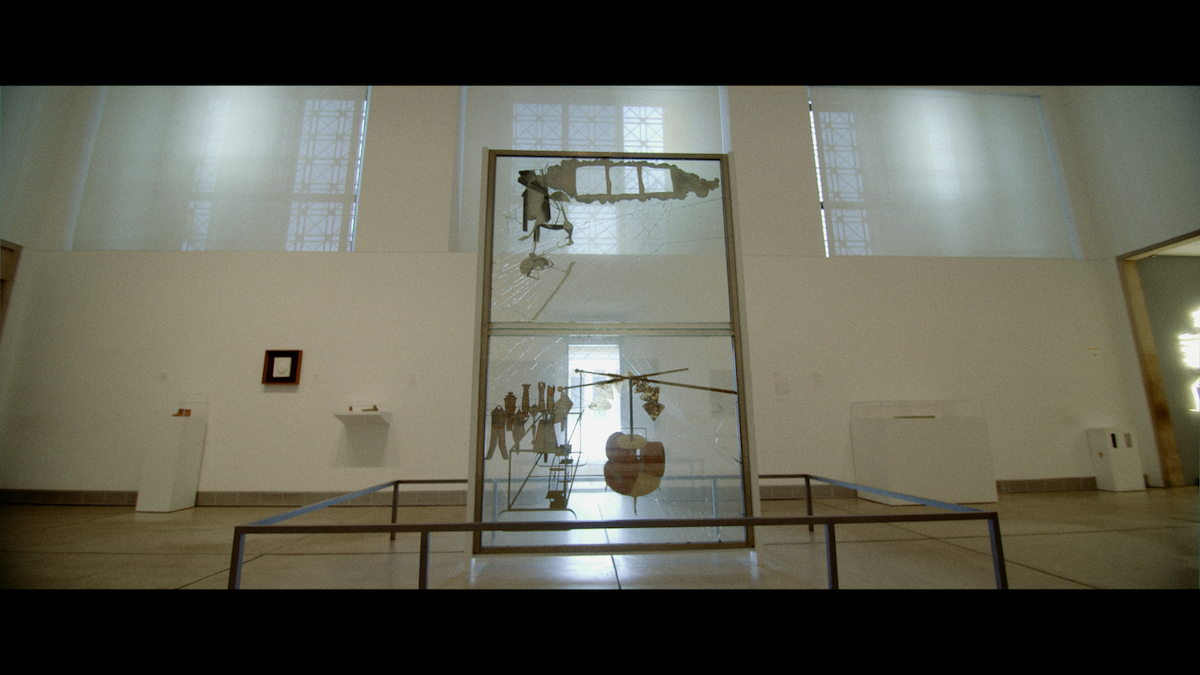 The Bride Stripped Bare by Her Bachelors, Even (The Large Glass) in Marcel Duchamp: The Art of the Possible.

Frequent speaker Michael R. Taylor, chief curator of the Virginia Museum of Fine Arts, puts Duchamp in a resoundingly timely frame when he says the artist “doubted the validity of art. Many people have these beliefs about art, that somehow it’s good for you—it’s uplifting. There might even be ethical and moral positions about art. Duchamp debunked all of that.” And speaking of the artist’s influence on future generations after him, New Yorker writer Calvin Tomkins (who started covering Duchamp in the ’50s) presents him as a foil to the brooding and serious Abstract Expressionists who “really believed that they were dealing with essential, ultimate questions—questions of doom and existence. All of the sudden this came to seem rather ridiculous.” 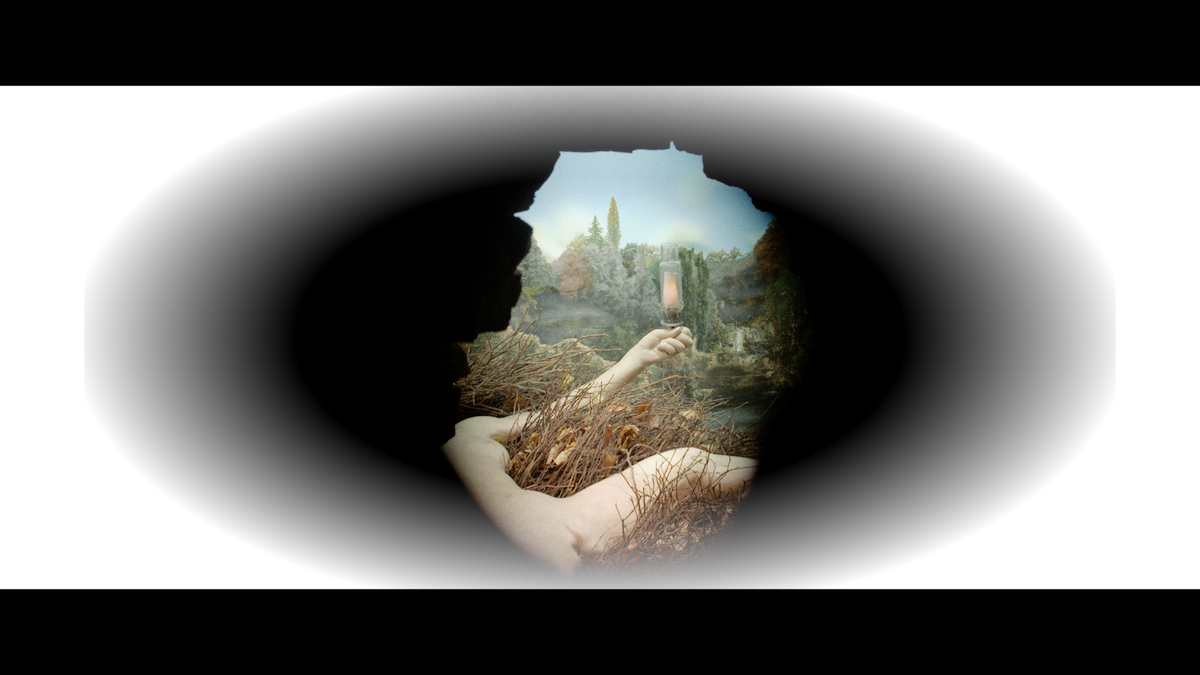 Étant donnés in Marcel Duchamp: The Art of the Possible.

It’s interesting—and more than a little perplexing, hopefully in a healthy way—to watch Duchamp: The Art of the Possible during our current global situation while wondering what the state of art will be and how it might change. Will the recent past come to be considered frivolous? Will the seriousness of the planet’s fate occasion a competing spirit of self-empowering levity and play? Might we see all of that, or none of it, at the same time?

Near the end, filmmaker Michel Gondry (himself a devotee of thoughtfulness and whimsicality) says of Duchamp, “What I like is this crossover between science and art, because in science there is no affectation. You really want to go forward. You don’t want to imitate. You want to go further and discover something that’s not been seen before.”

Taylor, the curator, follows soon after with a suitably Duchampian sentiment: “To follow in his footsteps is to question everything—including what he did.”

Marcel Duchamp: The Art of the Possible is available online at Amazon or iTunes.

The Best Silver Leaf Sheets for Adding Shimmer to Your Artwork