The sculptures of Ursula von Rydingsvard have always been somewhat enigmatic, towering structures made of wood—and sometimes other materials—that are at once poetic and deeply awe-inspiring. There’s a subtleness and delicateness to their strength and solidity. Despite their apparent ease, von Rydingsvard’s works are indeed laborious endeavors.

“I always seem to veer toward the things that are very labor-intensive,” von Rydingsvard tells director Daniel Traub in a new documentary about her life and work, titled Ursula von Rydingsvard: Into Her Own. Look no further than work that appeared in her 1990 show at Capp Street Project in San Francisco for proof. In one archival interview included in Traub’s film, she mentions that it took her weeks to cut a sculpture. After that came another two to three weeks of gluing, and then the application of a graphite powder, to give it texture.

Traub’s film runs just under an hour, but in that time, he’s able to offer fascinating insights into von Rydingsvard’s exacting process. The documentary is replete with tracking shots of von Rydingsvard’s Bushwick studio, as well as footage of the fabrication and installation of her hand-pounded copper sculpture Uroda (2015), which is now at Princeton University in New Jersey. Her studio is filled with endless piles of wood. She puts on a hazmat suit in preparation to begin work. She uses a bronze Prismacolor pencil to mark where her studio assistants need to carve the wood. She gives direction to the installers of Uroda before saying of the sculpture, “She’s coming into her own. She needs that scale.”

A straightforward artist documentary, Into Her Own includes commentary from artists Judy Pfaff and Sarah Sze, as well as from collector Agnes Gund, Whitney Museum director Adam Weinberg, and more. If it occasionally lacks cohesion, jumping around von Rydingsvard’s documentary in ways that can be confusing, the film still offers proof that von Rydingsvard is well worth studying at length. 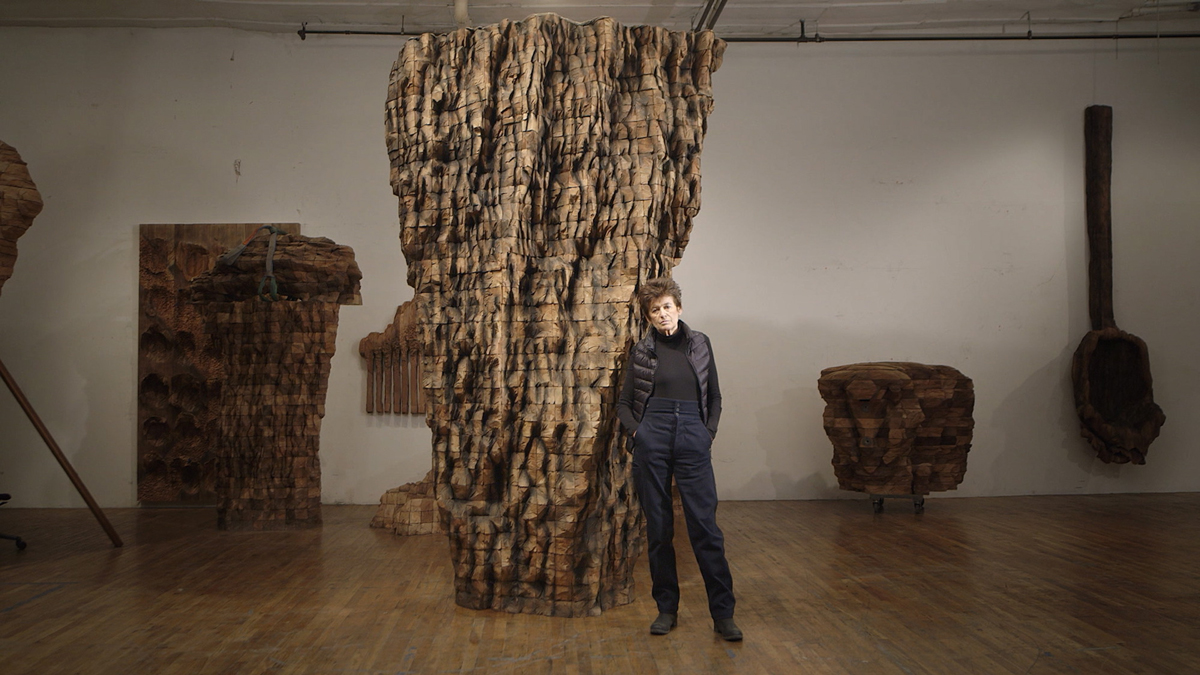 Ursula von Rydingsvard standing in front of Dumna in her studio in Bushwick, 2015.

Before von Rydingsvard rose to the status of an internationally acclaimed sculptor, with works exhibited at the Museum of Modern Art in New York, the Art Institute of Chicago, the 2015 Venice Biennale, Storm King Arts Center in Upstate New York, and numerous other venues, she came from humble beginnings. She was born in Germany in 1942 to a Polish mother and Ukrainian farmer father, both of them peasant farmers who were forced to work for the Nazis. After the war, they lived in a Displaced Persons camp in Germany for five years before they moved to Plainville, Connecticut, in 1950. (The family of nine made the front page of the local paper and was welcomed by the community.) Though von Rydingsvard made posters and Christmas decorations as a child, she didn’t initially think of becoming an artist.

“I never understood there was such a thing as an artist because I grew up in Plainville and it’s a blue-collar working town that had no artists that I knew of,” she says. But eventually she did decide she wanted to be one: “I had a tremendous yearning to be an artist and somehow I thought that I didn’t really deserve that, and it took most of my life actually to gain confidence.”

Von Rydingsvard’s early life was painful. Her father beat his children “mercilessly” while they were in the camp, she says, and he also emotionally abused her. “With frequency, I heard [him] telling me I was lazy, stupid, and worthless and somehow that intense hatred helped enable me to figure myself out as something other than stupid and lazy and worthless,” von Rydingsvard recalls.

The troubles did not end there. Later on, she moved to Oakland, California, with her husband, who was at one point institutionalized for schizophrenia. They divorced, and in 1975, at 33 years old, with her young daughter, von Rydingsvard relocated to New York City, where, using savings earned from years of teaching, she eventually purchased a SoHo loft on Spring Street for $6,000 that acted as her home and studio. 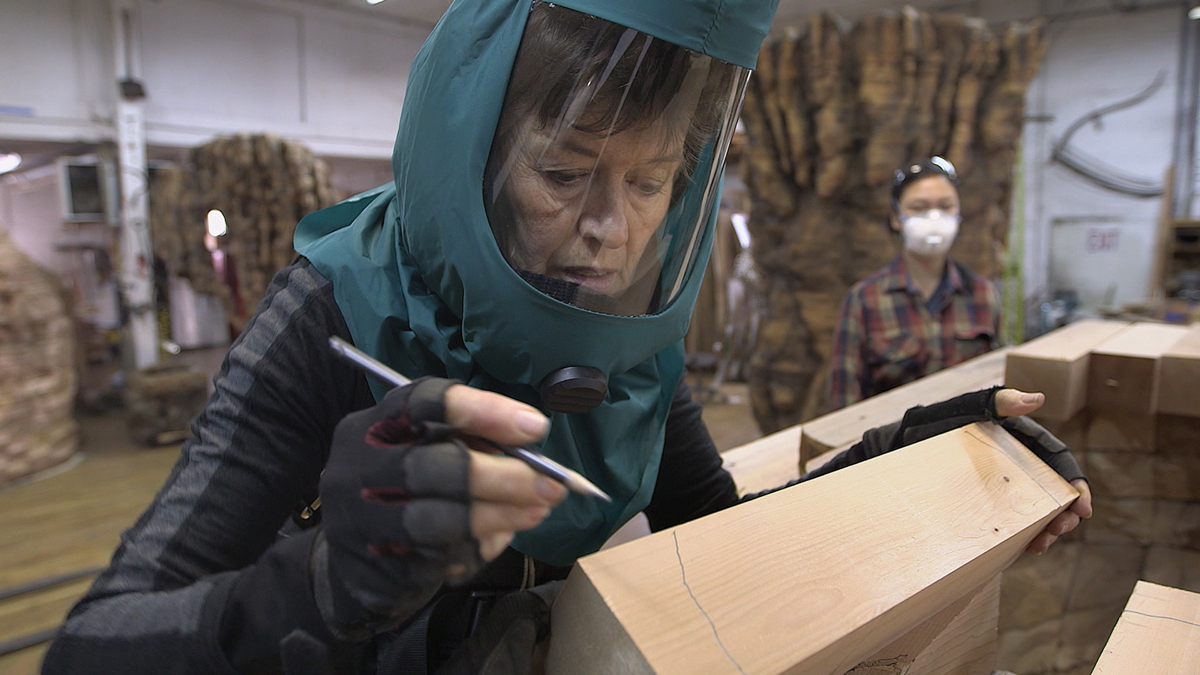 Ursula von Rydingsvard drawing cut lines on 4×4 cedar beams, which will later be cut with a chainsaw by her assistants, 2015.

She soon enrolled in the M.F.A. program at Columbia University and mostly worked in welding, but it wasn’t until toward the end of the program that someone introduced her to a 4×4 cedar beam, which would become her medium of choice for the next few decades. “Cedar is a difficult wood to carve with a chisel,” she tells Traub. “The fact that it doesn’t have a grain, the fact that I receive it in neutral 4x4s enables me to use it and abuse it that have a huge range of possibilities.” She adds, “I have been able to manipulate it in ways that are almost outrageous.”

Early on in the film, she talks about how, in the Displaced Persons camp, there was so much “rough, rugged” wood, which has become her signature medium. “I could smell, I could feel, and there was a huge difference between what happened within this wooden structure and what happened outside of it,” she says.

Later, however, we learn that there’s a more implicit connection to the wood birthed from a kind of creativity that seems to be “inherited” as her second husband, Paul Greengard, a Nobel Prize–winning brain researcher, once put it. When the couple eventually visited Poland, they saw stacks upon stacks of wood, all of them neatly organized. Those stacks share aesthetic affinities with von Rydingsvard’s sculptures, whose appearance seems to mirror the ways in which farmers in Poland tie wheat stalks together after harvest.

What’s most inspiring about von Rydingsvard, as portrayed in this documentary, is her connection to nature, which she calls her “major teacher,” and her thoughts on beauty: “I actually hate the word beauty, and I feel very uncomfortable using it because nobody knows what it means and everyone has their own understanding of it. It’s kind of like an idealized state, and I’m not sure anything like that exists.”