Lifestyle magazines come in many different forms, but the genre generally offers a glossy mix of luxury fashion shoots and product recommendations with moralizing content about using your phone less or updating your dinner-party etiquette, when that was a thing. Magazines like Kinfolk, Cereal, and Gossamer are ultimately about how to live your life as a conscientious but still tasteful consumer.

During the pandemic, however, the options to exercise our taste are more limited, restricted to restaurants with outdoor tables, ecommerce sales instead of boutiques, and entertaining ourselves with whatever we can find within the bounds of our homes. Subsequence, a semiannual magazine produced by the Japanese menswear brand Visvim, is the antidote both to quarantine ennui and the avalanche of cookie-cutter millennial-minimalist lifestyle publications during the 2010s. It maintains an intense sense of aspiration — the magazine costs $60 and the binding is stitched with naturally dyed thread — but it’s all about activities and projects that you might just consider doing yourself, a quarantine moodboard. It could inspire you to take up wabi-sabi ceramics, try Japanese fabric stencil dyeing (katae-zome), or check out arctic Scandinavia’s brightly colored hand-knit mittens, to name only a few of its offerings.

The third volume of Subsequence was just released, and it’s available on Visvim’s official website as well as from other fashion-friendly retailers. Its tagline is “Arts & Crafts for the Age of Eclectic.” “Eclectic” describes the magazine’s homespun palette and preference for the vintage and salvaged over the industrial and new. If some lifestyle magazines are about following a curated blueprint set by editors, Subsequence emphasizes seeking your own taste. Its subjects are quirky and specific. The new issue ranges from the work of Swedish documentary photographer Sune Jonsson, a short story from Etgar Keret, and the New York artist Jordan Nassar’s embroidered textiles to a feature on Visvim creative director Hiroki Nakamura’s restoration of Richard Neutra’s Schaarmann House in Los Angeles. 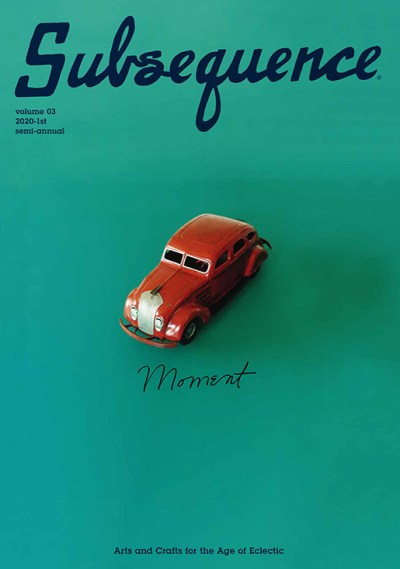 I first encountered volume two in McNally Jackson’s Soho bookstore; the bright yellow cover stood out, as did the mammoth size: it’s over 14 inches tall. It stuck in my mind so much that I eventually had to go back and commit to the sticker price. It was more than worth it for the sense of inspiration alone, not to mention the lavish original photography and full-bleed illustrations. Subsequence (the word describes a result or effect) has an intense terroir, but one rooted in specific spots all around the world instead of one place. What does an ancient method of making soy sauce have in common with a comic by the artist Nakaban, an essay on the sounds of the Minnesota woods, and a photoshoot of a Tokyo home stacked to the brim with paperback mystery books? It might be that they couldn’t happen anywhere else, and you certainly wouldn’t encounter them without the help of the magazine.

Subsequence’s editor Kosuke Ide returns lifestyle magazines to an older, grander, and certainly more expensive mode of editorial. It presents the unexpected rather than a pre-established cliche of social-media driven taste and culture. You won’t find any familiar celebrities or streaming suggestions in its pages — in fact, the Internet barely makes an appearance — but you will discover something new, unfamiliar but instantly cool.

Objet is a series highlighting artistic products and objects. Find more about art materials and inspiration in our ARTnews Recommends section.