Upon the sudden death of Remedios Varo in 1963, her peer André Breton noted that death made the painter “the sorceress who left too soon.” It was a fitting way of bidding goodbye to Varo, whose faith in magic, mysticism, and the power of nature inspired her fantastical, allegorical work. She died at the height of her success—her posthumous retrospective at the Museum of Modern Art in Mexico City in in 1971 surpassed attendance records at the institution for shows by Diego Rivera and David Alfaro Siqueiros.

In death and life, Varo was defined by her Surrealist associations. After fleeing her native Spain, the French poet Benjamin Péret introduced her to the Parisian avant-garde crowd, whose members she exhibited and studied alongside. Varo worked within a psychoanalytic framework, but her approach left little to accident or automatism. She was a meticulous architect of dreamscapes, planning well in advance the symbology that operated as roadmaps to her autobiography, though she rejected affiliation with the Surrealists, telling an interviewer in 1957, “I was with an open mouth within this group of brilliant and gifted people. I was together with them because I felt a certain affinity. Today I do not belong to any group.”

Below is a guide to Varo’s life and the many influences that shaped her creations.

Early exposure to religion, Romanticism, and science made an indelible impact on her imagination.

She was born María de los Remedios Alicia Rodriga Varo y Uranga in northeast Spain in 1908. Her father was a hydraulic engineer, whose profession often uprooted the family. Having recognized her artistic talent early, he had Varo reproduce his technical engineering sketches. An intellectual and a believer in universalism, the philosophical concept that certain ideas recur in all cultures, he introduced her to the work of Edgar Allan Poe, Alexandre Dumas, and Hieronymus Bosch. She was provided texts on mysticism, science, and philosophy. Her mother, in contrast, was a devout Catholic (Varo was named after the Virgin of Los Remedios). At 15, her parents enrolled her at the Escuela de Bellas Artes in Madrid, the alma mater of Salvador Dalí and Pablo Picasso.

Varo rebelled against it all—the formal instruction of the Escuela de Bellas Artes, her father’s expectations, and her mother’s religious ideology. At 19, she eloped with fellow student Gerardo Lizárraga, and the two left for Paris. She left him soon after to pursue a bohemian lifestyle, taking up with Péret. As an adult, Varo resisted speaking about her childhood. “I do not wish to talk about myself because I hold very deeply the belief that what is important is the work, not the person,” she said. 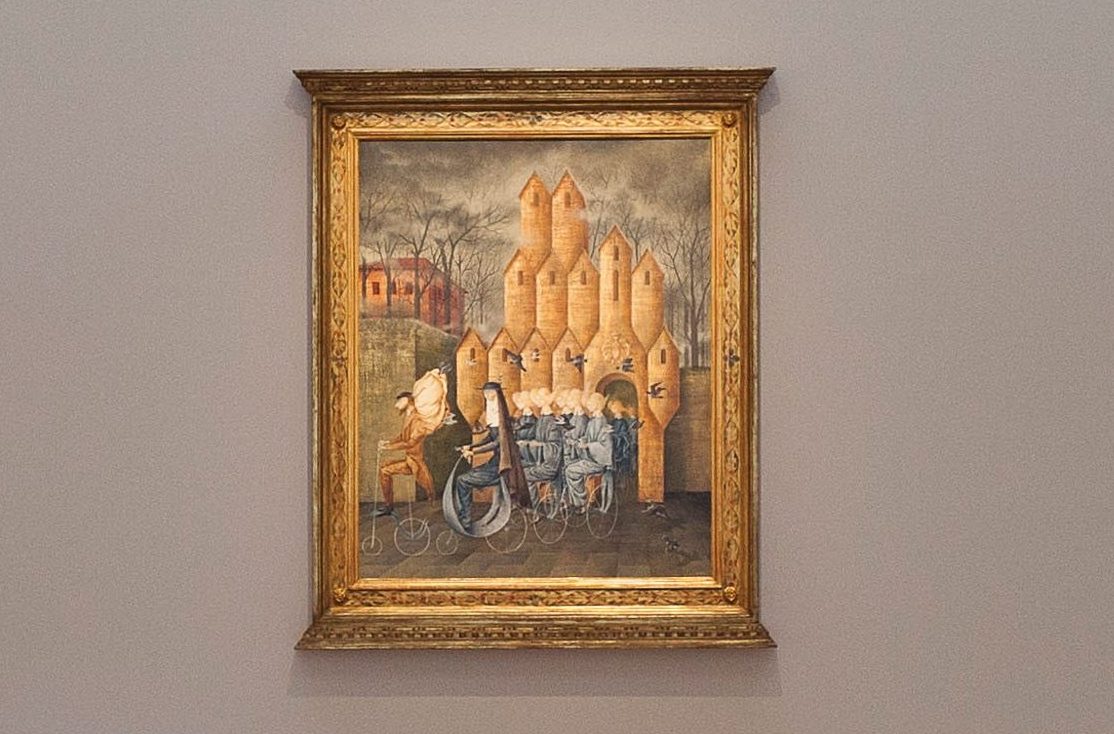 Toward the Tower by Remedios Varo, 1961.

A triptych created in the last years of her life functions as a metaphor for her early years. In the first part, Toward the Tower (1961), Varo depicts herself as one of a group of uniformed girls bicycling away from a Mother Superior figure, an allusion to the convent she attended for primary schooling. Mother Superior is joined by a looming man and flock of birds. The girl at center resists the hypnotizing effect of her teachers, who have entranced her schoolmates. The central image of the triptych, Embroidering the Earth’s Mantle (1961), offers an alternate view of creation at odds with her conservative Catholic upbringing, which created anxiety for Varo throughout her life. In the work, convent girls are shown captive in a tower as they embroider a story dictated by a hooded figure. The figure stirs a boiling liquid, through which the thread emerges. The final panel, The Escape (1962), represents her successful emancipation. United with her lover, they flee to the mountains.

Varo spent the majority of her life in transit, first as a child, then in adulthood as a political refugee.

Varo moved to Paris in 1937, and because of her political ties, she was barred from returning to her native Spain following the Spanish Civil War. Her time in Paris was fruitful for the connections she made: through Péret, she met leading artists such Breton, Max Ernst, Salvator Dali, and Leonora Carrington. After arriving in Paris she exhibited in the International Surrealist exhibitions organized by Breton and poet Paul Éluard. When World War II neared Paris in 1940, Varo was jailed under suspicion of espionage along with fellow Spanish expatriates. After her release she fled the country with Péret aboard one of the last ships allowed to depart the country, en route to Mexico.

Displacement and travel is frequently alluded to in her painting, often in the form of surreal vehicles of voyage. In Exploration of the Sources of the Orinoco River (1959), an intense figure dressed in a bowler hat and English trench coat is ferried in a small, vest-like boat. She reaches a wooden hut, where water flows from a goblet. The work alludes to Varo’s gold mining trip to Venezuela, where the Orinoco River flows. Here, gold is reminiscent of philosopher’s gold, an alchemical substance which symbolized perfection of the mind and soul, as well as a source of transformation.

Varo blended Renaissance and Surrealist painting techniques in her work.

In one of her best-known paintings, a juggler (or magician) transfixes a crowd of near-identical figures clad in a single gray cloak. The juggler is illuminated by white stardust, and he stands on the platform of a cart filled with  a lion and goat and fantastical instruments. Varo created the painting by first transferring a preparatory drawing onto a panel that had been primed with gesso, then scratching the panel to produce an unusual texture. Varo also used decalcomania, a decorative technique popularized by the Surrealists, in which designs on paper or aluminum foil are pressed onto another surface, transferring the image. This created the halo-like effect around the juggler. The central character has also been painted over a five-sided piece of mother of pearl, which Varo associated with enlightenment. Among her many influences was the writings of the Russian mystics and philosophers Georgii Giurdzhiev and Piotr Ouspenskii, who espoused the idea that people live their lives in a state of hypnotic “waking sleep,” but have the potential to awaken a state of hyper-consciousness.

Like many of the Surrealists, Varo was drawn to the psychoanalytic theories of Sigmund Freud and Swiss psychiatrist Carl Jung, both of whom focused on the complexity of the unconscious and untapped desires. It’s unknown whether Varo ever saw a psychoanalyst (a few unsent letters seeking psychiatric help were discovered in her belongings), but she populated her paintings with overt references to the field of study. In the 1956 work Woman Leaving the Psychoanalyst’s Office, the central figure exits from the office of Dr. F. J. A. (Freud, Jung, and the Austrian psychotherapist Alfred Adler) and proceeds to drop her father’s disembodied head into a small well, an act which she described as “correct to do when leaving the psychoanalysis office.” Looked at one way, this could be Varo liberating herself from the patriarchy and approaching autonomy.

She found success and an enduring artistic practice in Mexico City.

Her early exposure to Surrealist and Cubist artists, in particular the work of Georges Braque, were formative on her later practice, but Varo produced little work while in Paris. This was partly due to the sexism of Varo’s male peers, who she said held contemptuous attitudes toward women artists. In Mexico, however, she produced a lush body of work that often elevated a feminine figure. In The Call (1961), her body is illuminated from within by a supernatural glow. While working odd jobs, including a stint as Marc Chagall’s assistant, Varo reunited with fellow European expatriates, such as Leonora Carrington and photographer Kati Horna, who together became known as “the three witches.”

Upon Varo’s arrival, Mexican muralism still held sway, but by the time of Varo’s first exhibition in 1955, Surrealism had become a market force. The show was a hit, with buyers forced to add their names to a waitlist. She showed again at the Salón de la Arte de Mujer in 1958, and died of a heart attack five years later, in 1963.

After a period of relative obscurity outside Mexico, Varo’s star rises on the market.

Frida Kahlo, Varo, and Carrington are often considered the preeminent women artists associated with the Mexican Surrealist movement. Varo remained relatively unknown outside Mexico after her death, but her profile has steadily climbed in recent years alongside rising demand for female Surrealists. Varo, having passed away at her prime, behind few works, many of which reside in private collections. In 2012, the Museum of Modern Art in New York acquired The Juggler (The Magician), 1956, which is now prominently displayed in the Surrealist gallery beside works by Max Ernst and Salvador Dalí.

In 2019, Varo was featured in  “Surrealism in Mexico,” a retrospective at the Di Donna Galleries in New York, and in a pop-up show presented by Gallery Wendi Norris in San Francisco, which paired Varo with works by Carrington. “Some of the best paintings of Surrealism were made in Mexico during the 1940s and ’50s, by women,” wrote the New York Times in its review of the show. In June 2020, Varo’s 1959 canvas Microcosmos (Determinismo) sold at Sotheby’s for $1.8 million, marking the fifth-highest price paid for the Varo’s work at auction. Armonía (Autorretrato Sugerente), 1956, achieved an even higher number, selling for a record-breaking $6.1 million, far surpassing its high estimate of $3 million.