On Thursday, Christie’s brought in a total of £90.3 million ($118 million) with buyer’s premium across four sales at its Paris and London headquarters. In the auction series, titled “20th Century: London to Paris,” the house deployed the live-streamed format, with Christie’s France president Cécile Verdier and its Europe president Jussi Pylkkänen at the helm.

Still unable to host large live audiences, auction houses have engineered new set-ups that focus attention on the bidding dynamic across specialists and auction staff—which acts as a way to inject tension without the energy of a salesroom packed with buyers. Typically, there are more than 100 guests at a Christie’s sale of this kind; last night, there were eight live guests in the room according to Pylkkänen, who led the London auction.

In a post-sale press conference, Christie’s representatives said that the format—which was once unconventional, and is now becoming the norm—holds out promise for the future. “It’s about creating bridges across our selling centers,” Pylkkänen said. “The vocabulary of the art market has changed fundamentally.”

“We know it’s a difficult moment—it’s a challenging market,” said Christie’s CEO Guillaume Cerutti. “We need to be creative by buildings sales that are selective…. Creativity is key in this market.”

The top lot was Peter Doig’s Boiler Room (1993), which went to a bidder on the phone with specialist Katherine Arnold for £13.9 million ($18.2 million), hammering below the estimate of £13 million. Next was David Hockney’s commissioned Portrait of Sir David Webster (1971), which was sold by the Royal Opera House to raise funds as part of a long-term financial recovery plan. Hammering at £11 million ($14.4 million) and likely going to the guarantor, it sold for a total of £12.9 million ($16.8 million) with buyer’s premium. The third-most expensive lot was Bacon’s Study of the Human Body (1991), acquired by the seller from the estate of the artist. It sold for £5.5 million ($7.2 million) with buyer’s fees. 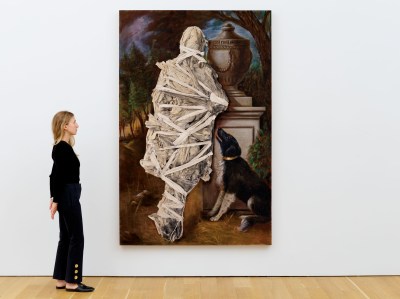 The house brought Marina Abramović’s The Life, a 19-minute mixed reality performance featuring the artist’s 3D digital avatar, to auction, making it the first work of its kind ever to hit the block. The private Copenhagen-based Faurschou Foundation won the piece with a hammer of £230,000 ($300,856), far below its £400,000 low estimate.

Works by market darling Titus Kaphar, who has recently seen a spike in demand following his addition to Gagosian’s roster, saw steep competition. Fidelity (2010), depicting a mummified figure and a dog, sold for £250,000 ($326,000)—double its low estimate. This week, Kaphar saw a new record at with the sale of his 2016 painting Alternate Endings for £466,200 ($604,350) at Phillips London.

A 2005 portrait by Canadian artist Steven Shearer, whose works do not come up at auction often, sold for £125,000 ($163,000). The result follows ex-Christie’s chairman Loic Gouzer’s sale of Shearer’s Synthist for $437,000 as the debut work for his members-only auction app Fair Warning in June. The previous record price for the artist was $164,014, for the work HASH, which sold at Sotheby’s London in October 2015.

Elsewhere in the sale, works by Rudolf Stingel and Anish Kapoor—whose markets have declined somewhat in recent years—failed to find buyers.

Remembering Zarina Through Her Minimalist Abstractions