AbTeC Island is a destination in the online world of Second Life that makes an Indigenous future accessible now. Mohawk artist Skawennati founded AbTeC—short for Aboriginal Territories in Cyberspace—in 2005. Since then it has gradually grown, acquiring new components and landscapes. A glowing, flowering tree—an allusion to the Celestial Tree from the Haudenosaunee creation story—looms high over the island’s circular central plaza. In May, AbTeC Gallery, its digital facades textured like granite and glass, opened “Reformatted,” an exhibition with digital versions of artworks by Rebecca Belmore, Maria Hupfield, Nadia Myre, and other contemporary Canadian Indigenous artists. In June, Black Lives Matter signs were staked into the ground, signaling that this Indigenous online community stands in solidarity. AbTeC Island isn’t escapist; it responds to real-world events.

Skawennati built most of the island’s environments in the course of producing machinimas, or movies made in virtual worlds. AbTeC is like a Hollywood back lot filled with sets and props from her machinimas like TimeTraveller™ (2008–13) and The Peacemaker Returns (2017). For TimeTraveller™, Skawennati created period sets to retell decisive moments in Indigenous history, like the 1990 Oka Crisis, a three-month standoff between the Quebec police, the Canadian army and Mohawk protestors who were protecting land from a golf course expansion and condo development. But she also imagined a glitzy Winnipeg powwow in 2112, and, in The Peacemaker Returns, an interplanetary peace conference in 3025 that reprises the founding of the Haudenosaunee Confederacy. AbTec Island is an online community space, where Second Life users can hang out and talk. But it’s also a place where the ancient and the futuristic coexist. 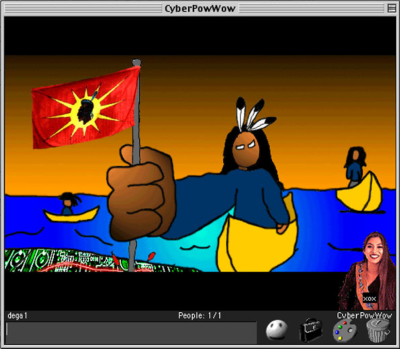 Skawennati’s avatar xox visits a chat room made by Joseph Tekaroniake Lazare (aka Dega) for CyberPowWow 04, 2004.

Skawennati made her first efforts to build Indigenous communities online in the late 1990s using the chat platform The Palace. Her CyberPowWow project (1997–2004) hosted participants in chat rooms with names like “tv_portal” or “Git yer cowgirl avatar here!,” creating cartoon avatars to roleplay conversations through speech bubbles. “Nobody cared about us back then,” she said in a recent interview. “They couldn’t compartmentalize us. We weren’t Native enough, and we weren’t net art enough.” But today CyberPowWow is being restored by Rhizome as part of its research into early online communities and its ongoing preservation efforts of significant digital artworks using emulation software.

When Skawennati shifted her focus to Second Life, the virtual world was weird, kinky, and rich with possibility. Artists like Cao Fei, LaTurbo Avedon, and Eva and Franco Mattes tested the platform’s ability to blur the relationship between the virtual and the real. While others moved on, Skawennati has stayed. The COVID-19 pandemic has seen resurgent interest in virtual environments. Linden Lab, the developer of Second Life, recently confirmed a 60 percent increase in new registrations, and a 10 percent increase in returning users. Sufferers of Zoom fatigue are dipping into 3D virtual worlds for more textured online interactions, as a recent article in Wired reported. 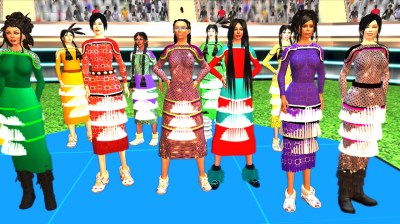 Skawennati and Jason Edward Lewis, her partner and the co-founder of AbTeC, describe the island as an autonomous zone, a space of Indigenous self-determination. It’s the virtual headquarters for a research network based at Concordia University in Montreal that also supports programming and game design workshops for Indigenous youth. These offline expansions of the initiative lessen AbTeC’s dependence on Second Life, softening the paradox of creating a self-determined community with someone else’s software. “In the end, I know it’s not mine, and I know if the platform goes bankrupt or obsolete, I will lose a lot of the work,” Skawennati said. “That’s why I take lots of pictures, lots of documentation. As long as you know you’re not actually in control, you have a lot of control.”

Even with this dependence, virtuality brings power to Skawennati’s vision. Afrofuturism uses science fiction’s tropes to imagine alternate histories and futures for the African diaspora. Anishnaabe scholar Grace L. Dillon coined the term “Indigenous futurisms” in her introduction to Walking the Clouds: An Anthology of Indigenous Science Fiction (2012) in homage to Afrofuturism, but she also asserted a cultural specificity. “All forms of Indigenous futurisms are narratives of biskaabiiyang, an Anishinaabemowin word connoting the process of ‘returning to ourselves,’ which involves discovering how personally one is affected by colonization, discarding the emotional and psychological baggage carried from its impact, and recovering ancestral traditions in order to adapt in our post-Native Apocalypse world,” she writes. Indigenous futurisms envision a decolonized world, which is exactly  what Skawennati does with Second Life. 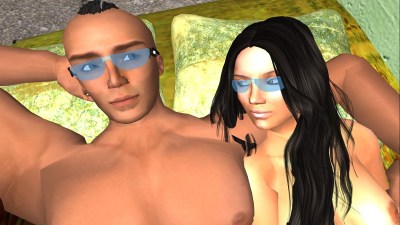 TimeTraveller™ is a foundational narrative in her ongoing project. The nine-episode machinima follows Hunter, a young Mohawk man in twenty-second-century Montreal who struggles to find his place in a techno-consumerist society. Seeking change, Hunter decides to use his TimeTraveller™ VR glasses to go on a vision quest through significant events in the history of the First Nations. Along the way, he comes to terms with his heritage, and gets rich and famous as a pro gamer/reality TV star. Sleek and handsome, with a long topknot, Hunter at first moves through the past with a cool aloofness. “The best part about TimeTraveller is that you can exit the program at any time,” he remarks when the Sioux Uprising of 1862 ends in a mass execution. “When things get heavy or boring, just punch in another date or log out.” But then he involves himself in liberation movements, working alongside Mohawks in the 1990 Oka Crisis, and joining American Indian activists in the 1971 Occupation of Alcatraz. Along the way he romances a twenty-first century Montreal woman who accidentally acquires a set of VR glasses from the future. Skawennati’s narrative personalizes past events, while also offering a vision of the future where the hopes of the past are realized.

The relationships that Hunter builds with the people he meets on his VR journey correspond to Lou Cornum’s observation that in Black and Indigenous science fiction, encounters with the other are founded on connectivity and mutual reciprocity rather than conquest and violence. Indigenous futurism and Afrofuturism alike use “non-Western knowledge systems to counter the destruction of land relations, create new conceptions of the human outside the racial logics of settler colonialism and slavery, and forge expanded understandings of space/time to incorporate the vast distances of outer space into our sense of home,” Cornum writes in a 2015 essay. 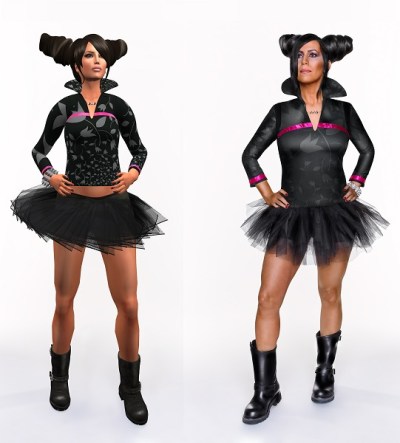 Skawennati: Dancing With Myself, 2015, diptych comprising a machinimagraph and a photograph, each panel 72 by 36 inches.

The love story in TimeTraveller™ is reminder that while Second Life can be a space for posing social questions of sovereignty and self-determination, it is primarily a medium of self-realization. Skawennati has used her avatar, named xox, to work through presentations of her Indigenous identity. The current iteration of xox is an urban Mohawk, combining cybergoth style—a black tutu and engineering boots—with a Hopi squash-blossom hairdo and an Iroquois calico-print pink ribbon shirt. Like many Second Life users, Skawennati sees her avatar as a more empowered, sexualized version of herself. But it’s also a way for her to grapple with demonstrations of cultural authenticity. Just as TimeTraveller™’s Hunter seeks out Indigenous stories in virtual worlds to come to terms with his identity, Skawennati continues to tell, build, and ask questions. “How do you represent yourself as a Native person in these spaces? Why do we do that? Do we need to do that? I think they’re very important questions,” she said. Even if Second Life shuts down, she added, “I think there will still be a cyberspace to help answer those questions.”