A portion of the collection of New York collector, art dealer, and interior designer Hester Diamond, who died in February, is coming to auction. The heirs of Diamond’s estate, one of whom is her son Michael Diamond (a founding member of the formative hip hop group the Beastie Boys), are selling their late mother’s collection at Sotheby’s in January during the auction house’s Classic Week sales.

Diamond’s collection includes modern and contemporary art, as well as work by Old Masters, which she began collecting after her husband Harold’s death in 1982. The collection will be offered across a single-owner live and online sale tilted “Fearless: The Collection of Hester Diamond.” The evening sale will be comprised of 60 lots total valued at an estimated $30 million. 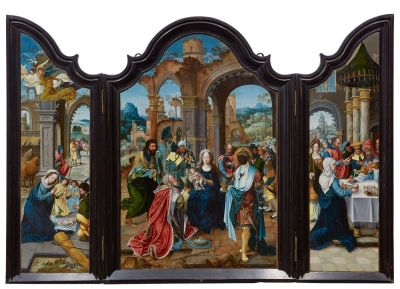 Pieter Coecke van Aelst, A Triptych: The Nativity, the Adoration of the Magi, The Presentation in the Temple, ca. 1520.

The lead lot of the sale is a sculpture by Baroque father-son artists Pietro and Gian Lorenzo Bernini titled Autumn (1616). The work is expected to achieve a price between $8 million and $12 million, and is poised to break the artists’ record. Other leading works include a 16th-century triptych by the Flemish master Pieter Coecke van Aelst, estimated at $2.5 million–$3.5 million, and two 16th-century paintings by Italian Renaissance artist Giovanni di Niccolò de Lutero (also known as Dosso Dossi) that were commissioned for an Italian noble, The Sicilian Games and The Plague at Pergamea. Both are estimated at $3 million–$5 million.

Experts said that some works from Diamond’s holdings coming to auction are rare and highly valuable. Speaking of the Coecke van Aelst triptych, Diamond’s stepdaughter Rachel Kaminsky, a dealer who formerly served as head of Christie’s Old Masters paintings department, said, “In terms of an early Netherlandish painting, of whats available, that’s really an A+ picture.”

The contemporary art portion includes Ablutions, a video installation by Bill Viola valued at $70,000–$100,000, and a sculpture by Dustin Yellin. The consignment also includes a selection of Beastie Boys memorabilia.

This is not the first selection of Diamond’s high caliber works to come to auction. In 2004, she sold six modern works in Sotheby’s Impressionist and modern evening sale in New York; they collectively netted $39.1 million. Among those works was Mondrian’s Boogie Woogie (1941–42), which sold for $21 million, and Brancusi’s The Kiss (1908), which sold for $8.9 million.

For those in the market, Diamond’s collection is significant, not just because of the caliber of the works in it but also because of the history surrounding it. A social worker turned art dealer, Diamond amassed a modern and contemporary collection with her first husband Harold, with whom she began her art world career in New York. Rising prices for art of the 20th century forced Diamond to look to relatively more affordable modes of collecting. She began collecting Old Masters art during the 1980s, at a time when the category was still dominated by male patrons, which remains true today. “If you look at women as collectors of Old Master paintings and sculptures, there are very few, and there were even less when she started,” Kaminsky said, adding that unlike her contemporaries, Diamond also wasn’t collecting as part of a couple.

Later she would go on to serve as president of the Medici Archive Project, a research institution devoted to scholarship around the collection of Florence’s Medici family. In 2012, she founded VISTA, a virtual imaging project focused on European sculpture, with dealer collector Fabrizio Moretti and music industry veteran and collector Jon Landau.

“Her taste and her visual sensibility were so strong, it ran through everything, the modern and the old,” said Kaminsky.

Diamond’s estate is a prime example of the kind of single-owner collection that auction houses compete to sell. Recently, museums, auction houses, and galleries have been jockeying for key works from the holdings of late collectors like Anne Marion and Paul Allen.

Follow Colossal: Get the Best in Art, Design, and Visual Culture Directly to Your Inbox and Elsewhere