In the months after lockdown ended, it appeared that the pandemic had brought an end to the days when auction salesrooms buzzed with bidding wars between international collectors. Based on two sales held in the London this week, it seems that that energy is once again returning.

This week, as collectors descended on London for the first Frieze week since 2019, Christie’s and Sotheby’s held their modern and contemporary art evening sales in the British capital. Together, the two sales—which were led by Christie’s Europe president Jussi Pylkkänen and Sotheby’s European chairman Oliver Barker—generated a hammer total of $164 million (or $178 million with premium), landing above their combined estimate of £83.9 million ($123 million). The sales realized a solid 86 percent sell-through rate across 83 lots.

Sotheby’s sale brought in £65.9 million ($90.1 million), against an estimate of £46.8 million. The result was up 38 percent from the house’s equivalent contemporary art evening sale last October, which brought in $62.2 million.

When Banksy’s infamous work Love Is in the Bin (2018) came up for auction at Sotheby’s, a buying frenzy reminiscent of ones seen in pre-Covid times ensued. The painting is a partially shredded image of a young girl gazing at a heart-shaped balloon. In 2018, the work came up for auction as Girl with Balloon (2006). After selling at Sotheby’s for $1.4 million, Banksy’s painting famously began to destroy itself. This week, Love Is in the Bin hammered for a record-setting £16 million ($21.9 million) on Thursday, though not before 10 bidders battled it out for 10 minutes. The Banksy sold to a buyer registered in Asia on the phone with private sales director Nick Buckley Wood, who is based in Hong Kong.

Flora Yukhnovich’s I’ll Have What She’s Having (2020), an abstract painting that takes its cues from the Rococo movement, also saw a good deal of competition. It sold for £2.3 million ($3 million) to a phone bidder after another 10-minute long bidding spree. That price is nearly 40 times its £60,000 ($82,100) low estimate. The painting nearly tripled Yukhnovich’s previous record of $1.2 million, minted this past June when her canvas Pretty Little Thing (2019) sold for 20 times its estimate of $60,000 during a Phillips evening sale. 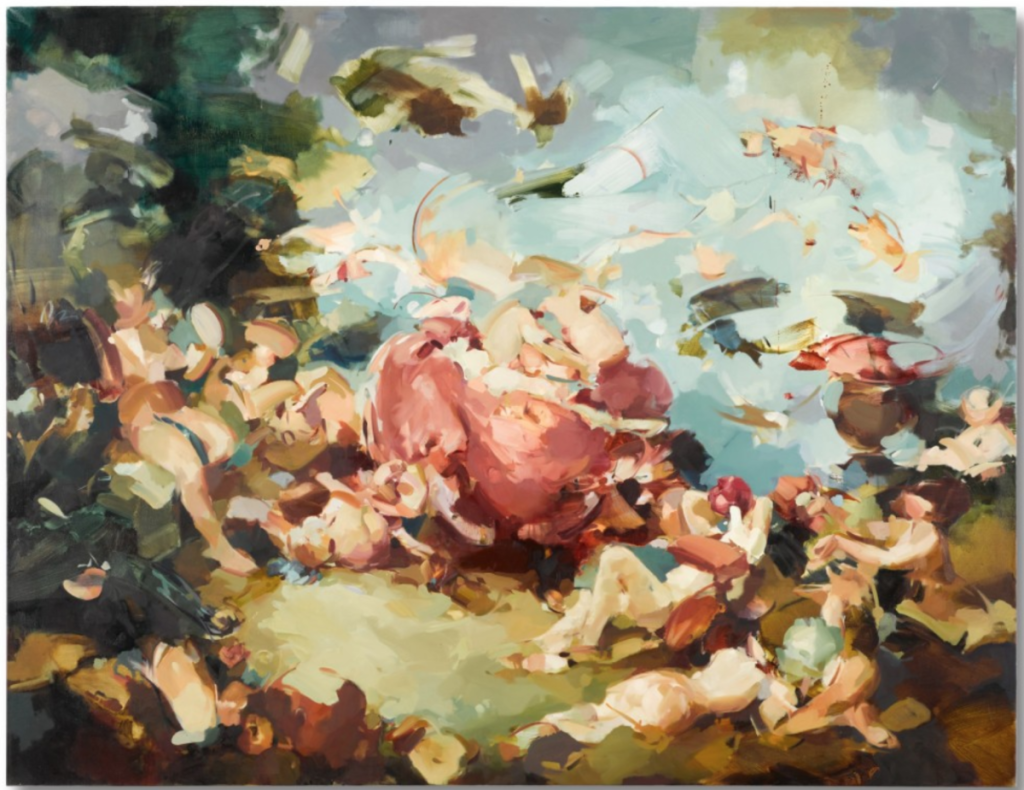 Yukhnovich is among the most sought-after emerging artists at auction, along with Jadé Fadojutimi, whose exuberantly colored abstractions were recently acquired by the Tate museum network, making her one of the youngest artists in its collection. A new record came for Fadojutimi at a Sotheby’s day sale in London this week. Then, one day later, that record was re-set at an evening sale at Phillips.

In the Sotheby’s day sale, 40 bids drove the final price for her painting A Muddled Mind That’s Never Confined (2021) to £1 million ($1.4 million), more than 12 times its low estimate of £80,000. Fadojutimi donated the work to be auctioned, with proceeds going to the World Wildlife Fund. On Friday, Fadojutimi’s Myths of Pleasure (2017) surpassed the artist’s record at Phillips, selling for £1.2 million ($1.6 million), 15 times the estimate of £80,000. The Fadojutimi record came at a Phillips sale that also saw new benchmarks set for in-demand young artists like Serge Attukwei Clottey, Tunji Adeniyi-Jones, Issy Wood, Sanya Kantarovsky, and Shara Hughes.

With a Guggenheim Museum show having just opened in New York, Etel Adnan, a Paris-based artist who is more than 60 years Samson’s senior, appears to be gaining recognition on the art market. An untitled work by Adnan sold at Sotheby’s for £352,800 ($482,000), more than 5 times its pre-sale low estimate of £60,000 and more than double the artist’s previous record of $171,000.

Over at Christie’s, the top-selling works were mainly by artists whose market success is already well-cemented. On Friday, the house held its marquee London sale during Frieze week in the afternoon in order to accommodate bidders in Asia. As houses like Christie’s move around the timing of their biggest auctions to meet the needs of Hong Kong, a market hub where buying power is bullish, the long-held term “evening sale” is coming to seem like a misnomer.

At Christie’s, David Hockney’s guaranteed Guest House Garden (2000), a painting of an expressively hued abode, was among the top lots. It made its auction debut after remaining in the same collection for 21 years. At more than 6 feet long, this large painting sold for £5.8 million ($7.9 million), hammering below its low estimate.

Works by women painters were in high demand. Cecily Brown’s abstract canvas There’ll be bluebirds (2019) sold for £3.5 ($4.8 million). The work was donated by the artist; the proceeds will go to Clientearth, an environmental law group. Hilary Pecis’s Kaba On A Chair (2019), a still life featuring a cat in a living room, sold for £225,000 ($307,600), more than 5 times the estimate of £40,000. On the heels her recent addition to the roster at Los Angeles’s David Kordansky gallery, her market is rising as collectors in Asia vie for her paintings.