Right now, the view from atop Museum Hill at the Storm King Art Center is one of the most sought-after vistas in Upstate New York. No doubt its natural surroundings are part of its allure: the picturesque Hudson Valley is visible below. But intimate installations can be spotted, too, and from the hilltop, Mark di Suvero’s sculpture Pyramidian (1987–98) can be seen rising against the horizon.

There are indoor galleries nearby, but Storm King isn’t a museum in any static sense. Throughout its 60-year history, the sculpture park has more than doubled in size, with its borders currently occupying some 500 acres. Its curatorial ambitions have grown, too, and its landscape now accommodates pieces both permanent and ephemeral. During the current pandemic, with indoor museums seeming less appealing, the art center has become a bona fide destination—tickets are now selling out weeks in advance, making Storm King one of the hottest New York art spaces right now.

But before it became the sensation it is currently, Storm King started out relatively small. “The project began as a family-led institution,” John Stern, the president of Storm King since 2008, told ARTnews. “My grandfather started this from his love of the Hudson Highlands.”

When they purchased the Vermont Hatch estate in Mountainville in 1959 that would later become Storm King, metal manufacturers Ralph “Ted” Ogden and H. Peter Stern envisioned a more modest operation. Ogden planned an indoor museum dedicated to the paintings of the Hudson River School, to be housed in the French-inspired stone chateau on the grounds. Nothing about the area was picture-perfect, however: the estate was in disrepair; construction of the New York State Thruway had displaced millions square yards of gravel from the farmlands, depriving the landscape of natural protection from the elements; and nearby cedars and dogwoods were choked with vines and poison ivy.

Stern, Ogden’s son-in-law, would go on to manage the administrative side of the operation, while Ogden guided the aesthetics with the assistance of landscape architect William A. Rutherford, Sr. Together they filled depressions, softened the hillside, built walkways, and restored the gardens. Later, it was decided the diseased Red Pines were to be replaced with White Pines on a yearly basis. (The grounds are a work in eternal progress.)

Storm King Art Center opened in 1960 with exhibitions centered on American and European pastoral paintings, watercolors, and drawings. Still, Ogden was unsatisfied. “He was searching for an art medium that would work alongside the open space,” said Stern.

In 1967, Ogden traveled to the Adirondacks to visit the home and studio of David Smith, an Abstract Expressionist sculptor who had died suddenly two years prior. It was a formative visit, as Ogden saw in the outdoor arrangement of Smith’s sculptures a new vision for his beloved project. He acquired 13 brightly colored steel, iron, and bronze pieces that now rank among Storm King’s most prized possessions. David Collens, Storm King’s director and chief curator since the mid-1970s, developed the idea that each piece required its own space in the landscape. 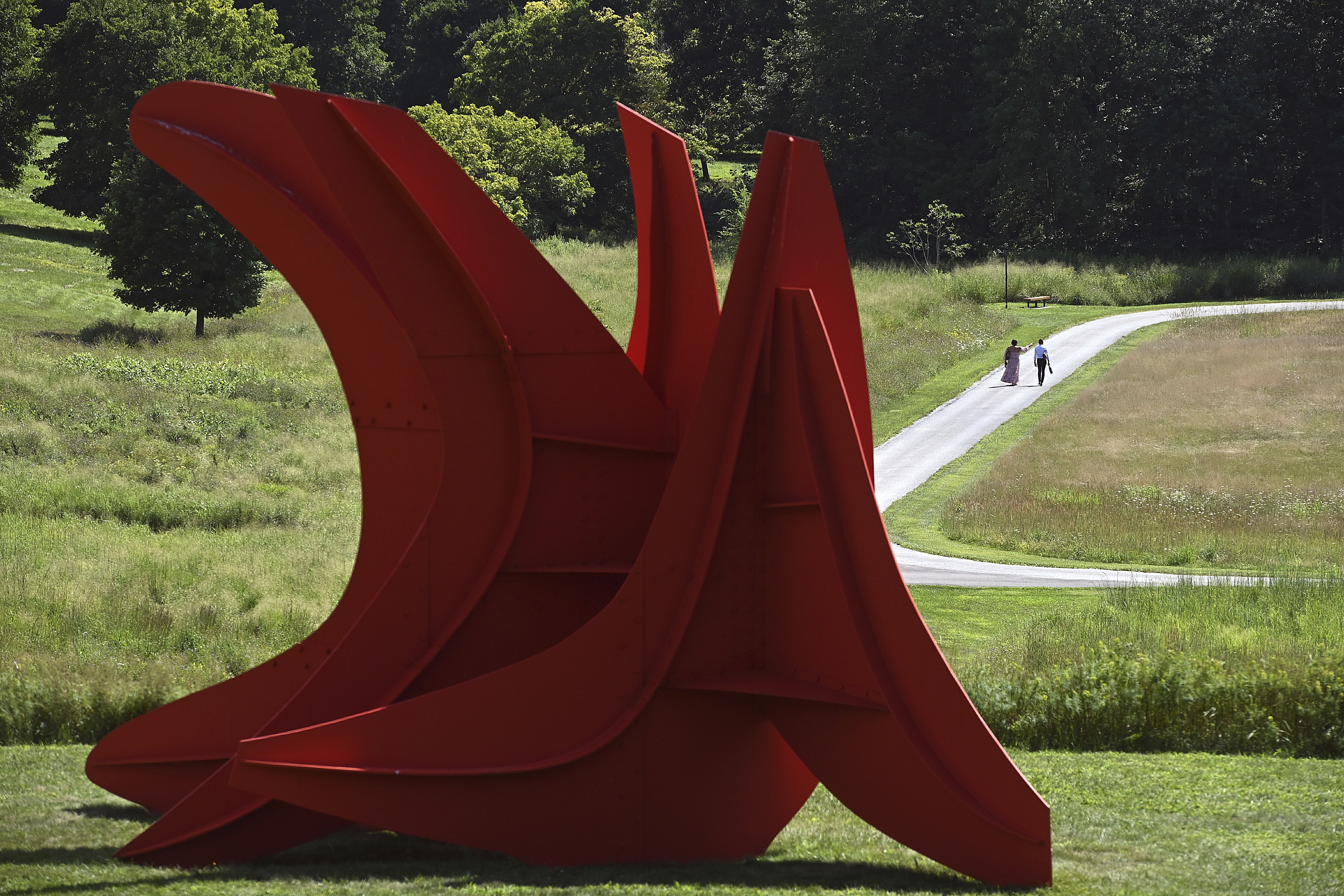 Today, a facilities crew with fewer than a dozen members maintains the giant complex. They trim trees, replant native flora, and refurbish the sculptures. It often takes a full day to mow Maya Lin’s Storm King Wavefield, a 240,000-square-foot rolling swell of grass. At any given time, the grounds contain around 115 sculptures, including permanent installations by Alexander Calder, Sol DeWitt, Isamu Noguchi, and Nam June Paik. Storm King senior curator Nora Lawrence explained that commissioned artists are encouraged to create works in tandem with the environment, with the understanding that the demands of the land may inform the final outcome. (Mercurial Upstate New York weather exerts its own will, too.)

Unlike conventional museums, Storm King will grapple with more existential threats in the coming years, as climate change demands new strategies of preservation. In the meantime, the institution faces expected challenges, such as how to be a better community partner or keep programming incisive. “We all want to continue to present people with what they’ve always loved about Storm King, but help evolve the idea of what outdoor sculpture can be,” Lawrence said.

Below are five seminal exhibitions and site-specific commission that have come to define Storm King.

At the time Serra produced this site-specific commission, a group of trees marked the southern edge of Storm King’s property—an area previously unexplored by visiting artists. The venerated Minimalists set out to be among the first to chart the terrain. He inserted in a field four weathered steel plates, each about eight feet high and nearly three inches thick. They are arranged lengthwise in a careful interval, corresponding to the field’s eight-foot descent, but they appear to jut out from the environment as some hills rise and fall. Since the sculpture’s creation, the area around it has undergone subtle changes, as the landscape accommodated new walkways and sculptures.

Goldsworthy’s first museum commission in the United States was conceived as a 750-foot-long dry stone wall snaking through the center’s grounds—a reference to centuries-old structures native to British farmlands. A team of British wallers were tasked with harvesting new stones and layering the artwork atop the remnants of a dilapidated farm wall, extending the original structure until it reached its intended endpoint at the base of an oak tree. Just as the sculpture was about to be completed, Goldsworthy changed course, and the work’s trajectory was extended nearly half a mile past the tree, plunging downhill into a nearby pond and emerging on the opposite bank. The wall, partly erected stone by stone, eventually winded uphill to the New York State Thruway, the western edge of Storm King’s property. It now spans a total length of 2,278 feet. The work “really illustrated a way in which artists could ask how the art, nature, and the visitor experience could come together,” said Lawrence.

Overlooking Storm King’s south sprawl is North South East West (1988–2015), a fountain sculpture by Lynda Benglis composed of four bronze figures. Though they’re made of metal, wire, and ceramic, the figures resemble something organic, like lapping waves, slow-cooling lava, or primordial crustaceans. These are related to ones that appeared in “Water Sources,” the first-ever exhibition of Benglis’s water sculptures, with works dating back to the ’70s. Among the most recent sculptures on display was Hills and Clouds, a phosphorescent piece composed of layers of stainless steel  and polyurethane foam. The impression is of layers of clouds, or a gem-crusted cave shifting in the light. “I wanted to imply something that appears to rise instead of being connected entirely to the earth,” Benglis said at the time.

The show, which Lawrence co-organized with David R. Collens, drew on an integral piece of Storm King history. Its focus was Abstract Expressionist sculptures by Smith, whose studio Ogden had visited in 1967. There, he found around 100 large and small-scale sculptures, nearly all of which were coated in bright colors. Just eight sculptures were left white. For this show, the sculpture park borrowed six of the eight white sculptures, placing them alongside what are believed to be Smith’s earliest works. It was an exhibition best served by its location; the varied hues of the natural backdrop appeared to bring out the cool white tones on display in Smith’s forms, whose cutouts resembled windows or frames.

Concerns about nature in flux have always been felt at Storm King, and the art spaces’s greatest expression of that was the 2018 show “Indicators: Artists on Climate Change.” The 17 artists included pondered a diverse array of issues. Gabriela Salazar’s Matters in Shelter (and Place, Puerto Rico), 2018, featured wooden poles supporting a blue mesh tarp, under which lay coffee beans on a cinder block floor—an homage to temporary structures erected for Puerto Ricans displaced by Hurricane Maria. Elsewhere, Meg Webster offered a solar-powered garden that grew native flora that was replanted on the grounds following the show’s run. And in his film Midstream at Twilight (2016), Steve Rowell followed a drone as it traced the transit path of petroleum coke from the headquarters of Koch Industries to its endpoint at a power plant in China.

Intricate Patterns Hand-Carved into Fruit and Vegetables by Takehiro Kishimoto