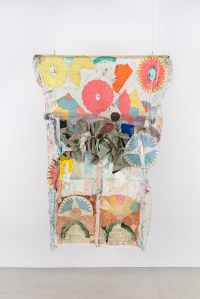 Suzanne Jackson: Hers and His, 2018, acrylic, cotton, scenic bogus paper, wood, 86 by 67 inches; at Ortuzar Projects.

Suzanne Jackson’s exhibition at Ortuzar Projects was an autobiography in visual form. Her lush watercolors, like Wormsloe Woods (2004–07), evoke the natural surroundings of Alaska, where she was raised, and Georgia, where she has lived for the past two decades. In her large sculptural hangings—mixed-medium compositions suspended from the ceiling or mounted to the wall—moments of carefully rendered figuration and collaged found objects sit alongside each other, reflecting her early training with the master draftsman Charles White and her involvement in the Black Arts Movement, as both an artist and a gallerist. (From 1968 to 1970 Jackson ran a space called Gallery 32 in Los Angeles. David Hammons, Betye Saar, and Senga Nengudi—then known as Sue Irons—all showed there.) In the late 1970s Jackson applied her skills to a set of outdoor murals in Los Angeles, an experience reflected in a history drawing-cracked wall (2016–19), a large-scale horizontal painting that teems with pictorial incident: faces, hands, even a kitten, all floating in whorls of watery pigment. Her stint as a theater designer in the 1990s is conveyed in works like Blues Garden + Track/Back-Sea (2010), which employ crumpled furls of Bogus paper, a material typically used to protect set and costume elements. She acknowledges deep family ties by incorporating motifs that honor her mother’s quilt-making. One particularly effective example, Hers and His (2018), suggests a coverlet, though its sewn sunbursts and fan shapes float free of any larger pattern. 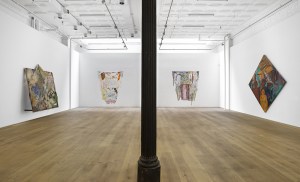 Given her significant accomplishments, the title of Jackson’s exhibition had a fine irony. The show was called “News!”—note the exclamation point. For this was, amazingly enough, the artist’s first-ever solo presentation in New York. After five decades, she is suddenly getting a lot of attention: her first retrospective, for instance, was held last year at the Telfair Museum in Savannah. This isn’t just another belated “discovery” of an under-sung artist, however: Jackson is currently making the most impressive work of her long career. 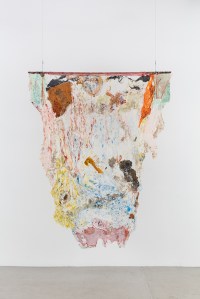 Suzanne Jackson: Light, light into Being, 2019, acrylic, leather, beads, plastic tubing, and metal rod, 87 by 67 by 3 inches; at Ortuzar Projects.

Her breakthrough came around 2013. Always interested in layering colors so they seem to hover in pictorial space—as can be seen in her early paintings, which feature numerous thin washes—she asked herself a difficult question: could she somehow suspend her paint in midair? It turned out she could. The secret was acrylic gel medium—essentially the binder used to make paint—without any pigment in it. Using a palette knife, or simply her hands, Jackson lays this clear liquid down on a flat surface, allows it to dry so that it becomes a membrane, and then adds more on top. As she builds the material up, she introduces paint, various suggestive found objects (beads, peanut shells), and lots of plastic netting. The netting both improves the work’s physical integrity and establishes a wonky grid that serves as a visual baseline for her gestural abstraction.

At their best, Jackson’s acrylic works are perfectly balanced between the everyday and the ethereal. Crossing Ebenezer (2017) memorializes a Civil War–era massacre of recently emancipated African Americans; composed primarily of red netting, it suggests both spilled blood and a distressed flag. Light, light into Being (2019) is a polychromatic cascade, a rainbow’s worth of color held in a diaphanous membrane, that more than lives up to its transcendent title. The light that floods through these works lends them a stirring, spiritual quality—a quality of revelation. At the age of seventy-five, Jackson feels at once like an elder stateswoman and like a new arrival on the scene.

This article appears under the title “Suzanne Jackson” in the March 2020 issue, p. 83.

A Letter From The Editor: Things You Said