Each time Beyoncé releases new music, it might as well be considered an art-world event too. She’s been known to include works by vaunted artists in her videos, and with her husband Jay-Z, she’s built up an important collection of Black art. She’s also been spotted at important exhibitions for the likes of Kerry James Marshall and William N. Copley, and has been shot by some of today’s most important photographers. Her latest endeavor, an 85-minute visual album titled Black Is King that debuted on Disney+ on Friday, is no different in that respect. Intended as a reinterpretation of the story of The Lion King (Beyoncé did voice work as the character of Nala for the 2019 live-action remake), Black Is King is filled with artworks of note, and includes contributions from art-world figures behind the scenes. Below, a look at the many art-world connections borne out in Black Is King.

Black Is King was overseen by Beyoncé in collaboration with a team of seven co-directors, two of whom appeared in the film section of last year’s Whitney Biennial: Blitz Bazawule and Jenn Nkiru. In that exhibition, Bazawule, who also works as a musician under the moniker Blitz the Ambassador, showed his 2018 feature The Burial of Kojo, which focuses on a Ghanaian girl’s spiritual journey to save her father who is trapped in a mine. Currently streaming on Netflix, the film was widely praised upon its release, with New York Times critic Glenn Kenny calling it a “near-virtuoso work,” and became the first Ghanaian film ever submitted for Golden Globes consideration.

Nkiru has helped Beyoncé draw out the art connections in her work before, having served as a second-unit director on the 2018 video “Apeshit,” which featured Beyoncé and Jay-Z dancing in the Louvre. At the Whitney Biennial, Nkiru showed BLACK TO TECHNO, a film commissioned by Frieze and Gucci that loosely focuses on techno music, with an emphasis on figures who have been downplayed throughout its history. “The film is making palpable the underground, obscured queer and womxn presence in house and techno history,” critic and curator Taylor Renee Aldridge wrote in a review for ARTnews. 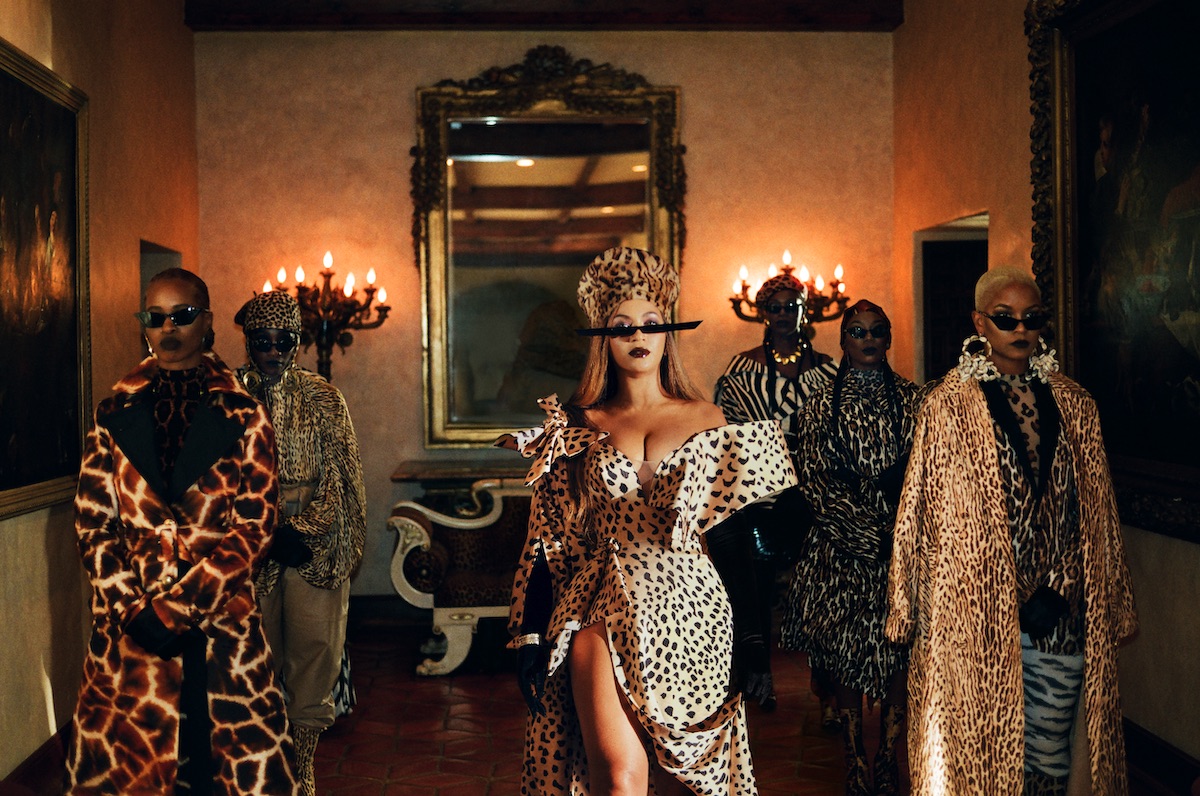 Artworks on display are key to understanding Black Is King, and one sequence set to the song “Mood 4 Eva” features a decadent manse adorned with paintings of note. At one point, a woman cloaked in a leopard-print jacket is seen gazing at a painting by Derrick Adams, whose pictures seem to fracture into abstract shapes focused on the representation of Black figures in mass media. Other shots feature sculptures by Woodrow Nash, whose steely figures draw on the traditions of Beninese art and Art Nouveau, creating what the artist has called “African Nouveau.”

Art is so prevalent in the “Mood 4 Eva” portion that the curator of that sequence—Tina Knowles Lawson, Beyoncé’s mother, who makes an appearance in the film—gets her own credit. Lawson has previously stated that some of the works included in the film come from her own collection, and speaking to Vanity Fair in 2018, she told curator and critic Kimberly Drew, “When my kids were growing up, it was really important to me that they saw images of African-Americans. I’m so happy that I did, because both of them are really aware of their culture, and I think a lot of that had to do with looking at those images every day, those strong images.”

Beyond “Mood 4 Eva,” the film’s closing credits include mention of works in other segments by Robert Pruitt—an artist known for his figurations drawing on science-fiction, superheroes, and histories of Black activism—as well as Conrad Egyir, Irina Shchukina, and Timothy Washington. The curator behind some of these works is also identified as Jeanne Greenberg Rohatyn, who founded the New York gallery Salon 94 and who has been known to work as an art adviser for Beyoncé and Jay-Z. 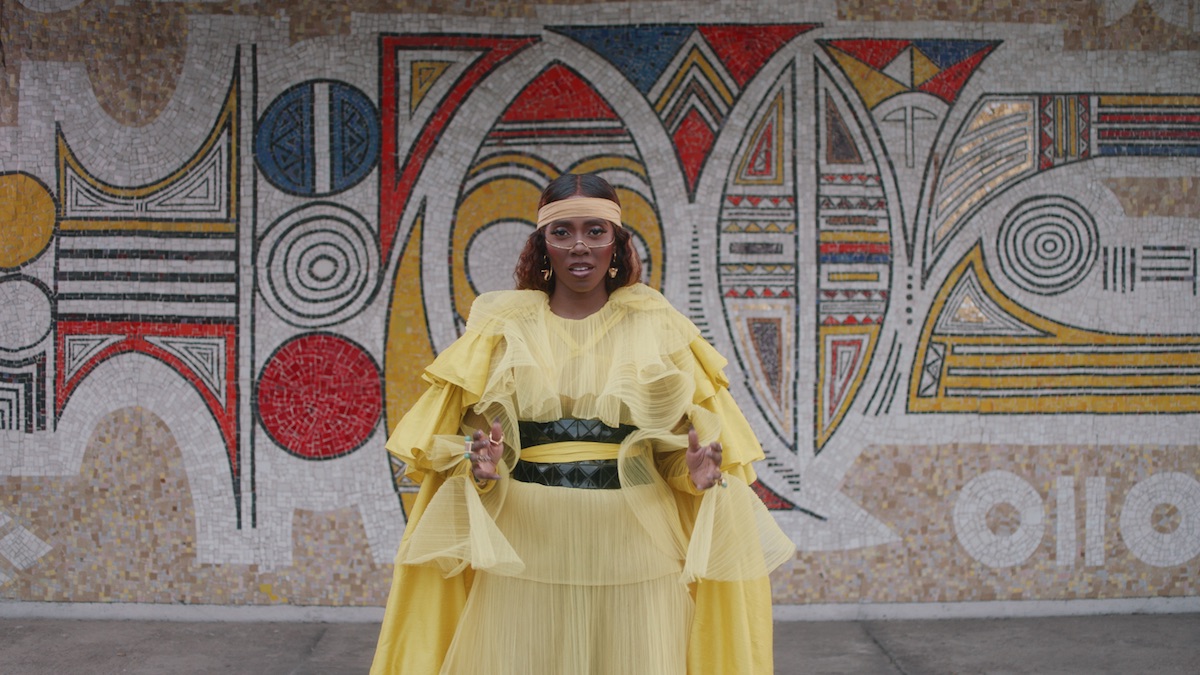 The influence of African art is apparent throughout BLACK IS KING.

Black Is King was shot on several different continents, though according to Joshua Kissi, a photographer who served as co-director, a special emphasis was placed on Africa. He told Teen Vogue, “This is the first time where we get to have a global conversation within the diaspora and beyond of what it means to be Black and what it means to be African at that, and I think there are many different nuanced conversations within that and topics on how that it’s expressed, who says it, who owns that narrative, how that narrative is actually beneficial to people that are continental Africans on the ground—as well as spread out throughout the diaspora.”

To that end, the film works to uphold African art by figures such as Nikiwe Dlova, who has supplied the hairstyles worn by the South African singer Busiswa. There are also clever nods to how African art has been exhibited abroad, specifically in the United States: Black Is King includes images from the 1971 book Black Gods and Kings: Yoruba Art at UCLA. 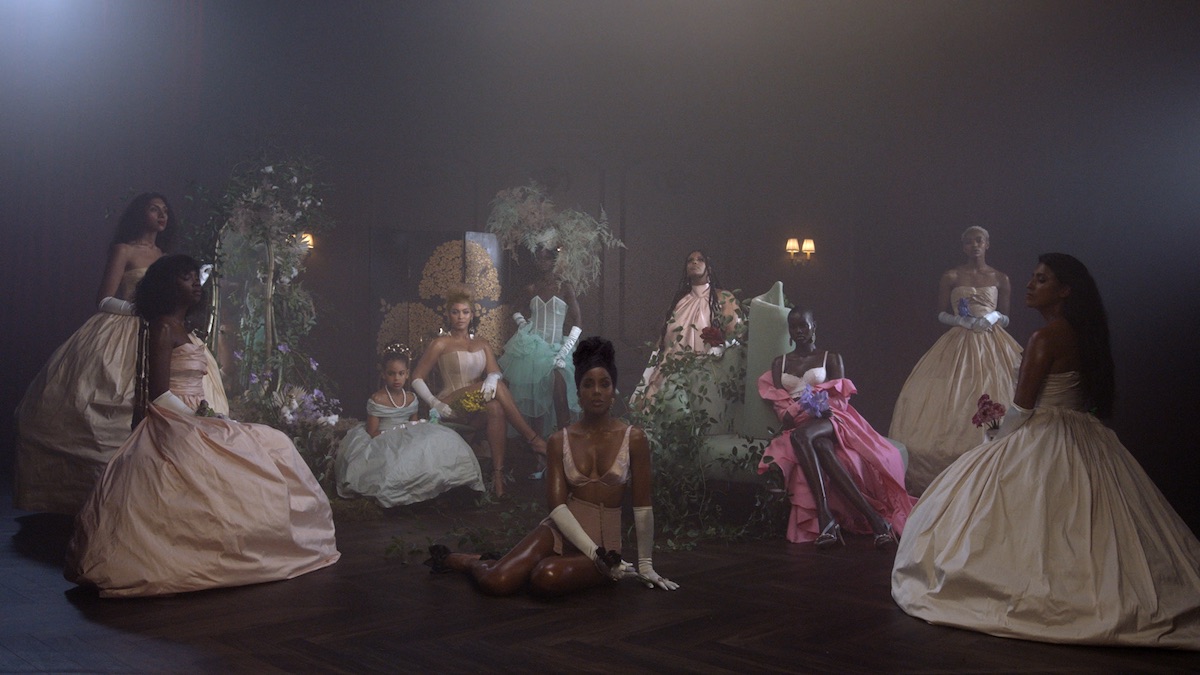 Daniel Obasi and Zerina Akers’s costumes are foregrounded in Black Is King.

No one who views Black Is King could possibly forget the clothes, which are lush and gorgeous. According to the credits, some of the designs come courtesy of Daniel Obasi, who has also worked as a fashion photographer. (Zerina Akers is also credited with doing the costume design.) Obasi’s pictures typically consider gender and sexuality in Africa and were shown at the Zeitz Museum of Contemporary African Art in Cape Town in 2019. Obasi’s work also appeared in art critic Antwaun Sargent’s 2019 book The New Black Vanguard, which focuses on a new generation of Black fashion photographers. Sargent quoted Obasi as saying, “My subjects are seen as beautiful, seductive, and in some cases otherworldly as a way of transferring significance and authority to minorities who are victimized or often ignored within my society.” 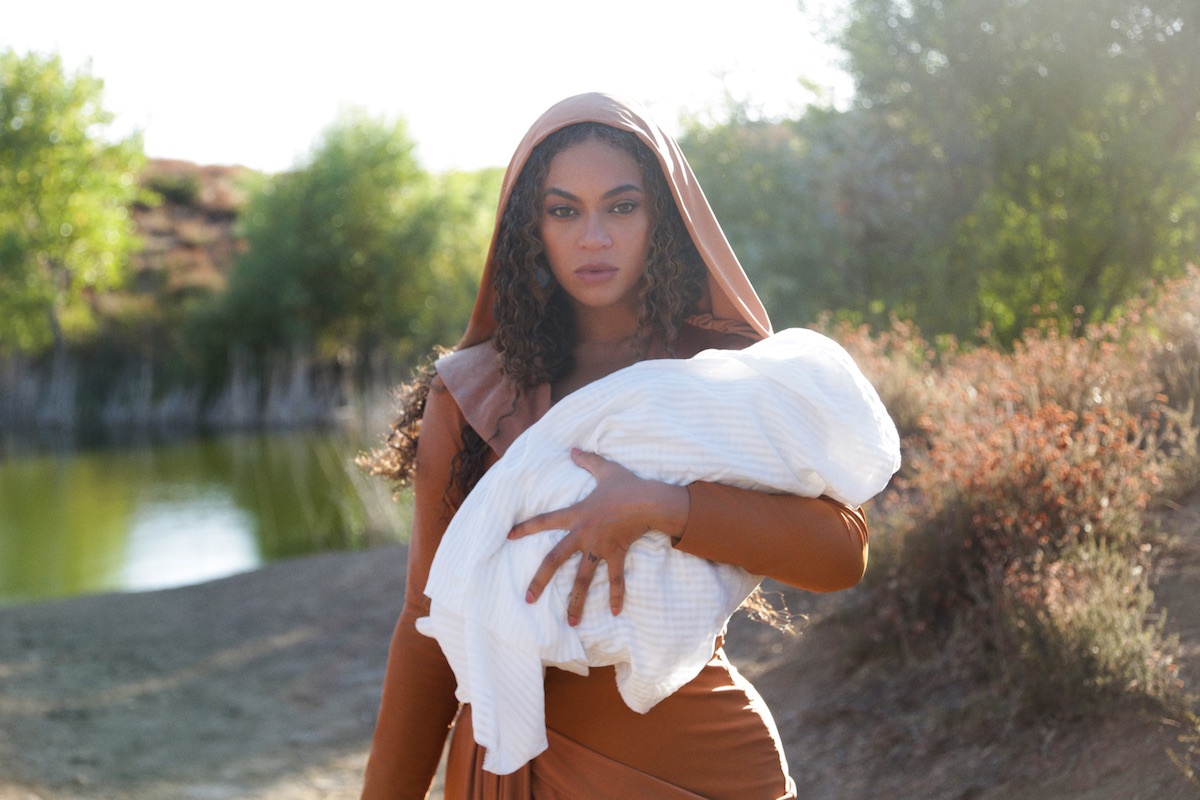 Beyoncé appears as a Madonna figure in Black Is King.

Throughout Black Is King, there are images of Beyoncé pictured as a Madonna figure. She cradles children on beaches, and she appears to exude a graceful intensity, as though she herself has been ordained by a higher deity. Sometimes, she even appears as the Madonna in paintings where she’s seen with a halo. Such representation has its roots in Renaissance paintings by the likes of Italian painters like Duccio, Giotto, and Raphael, who emphasized the Madonna’s motherhood and equanimity through triangular compositions privileging balance and beauty.

Yet this is not the first time Beyoncé has pictured herself as the Madonna. She previously employed the photographer Awol Erizku to shoot a pregnancy announcement in which she’s shown garbed in a flowy veil amid a wreath bursting with flowers. When she gave birth, the photographer Mason Poole reprised that Madonna imagery, shooting her in a cascading fuchsia-colored gown.

Beyoncé’s reliance on the Madonna trope can be seen as part of a larger project to recontextualize these art-historical tropes—typically reserved for white women—for a new audience. Such a goal finds a corollary in something Erizku once said: “I am trying to create a new vernacular, in terms of how you see my work and black art as being universal.”