“Material Intimacies,” a group exhibition at NXTHVN in New Haven, Connecticut, reminds us that personal intimacy, even the sort highlighted by the ongoing pandemic, is expressed materially—and shaped by social and historical forces, not least the global colonialism that still affects ties to resources and kin. Curatorial fellows Michelle Phuong Ting and Claire Kim reveal, in an official statement about their selection of works by eight artists, that they kept a guiding question in mind: “What might liberatory intimacy look like, one that frees us from racist, capitalist, and misogynistic structures of communal life?” Each work in the show conveys a discrete presence and sometimes communicates with others, but without being subsumed by any chronological or thematic system. 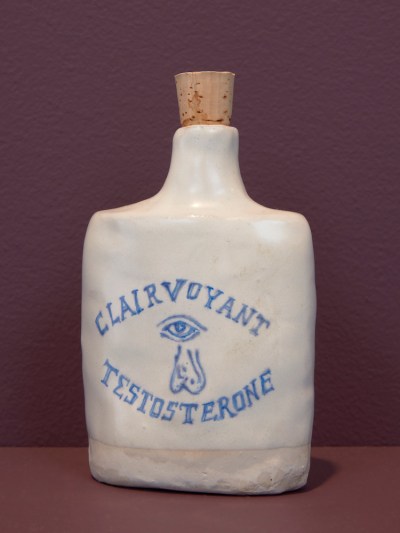 The voice of Mojave poet Natalie Diaz drifts from her film River Lines (2020), pervading the gallery space. Reading from her book Postcolonial Love Poem, Diaz places the ’Aha Haviily/Colorado River in kinship with her body: “The river is my sister—I am its daughter. It is my hands when I drink from it.” Yvette Mayorga’s bright, thickly layered acrylic paintings fuse consumerist iconography, rasquache (“leftover” or “underdog”) aesthetics, and federal emblems to make an optically striking critique of US xenophobia, while celebrating her Mexican-American heritage. Candice Lin’s crudely shaped and painted flasks satirize the orientalist fascination with luxury goods of refined porcelain. The white corked vessels, containing herbal tinctures and bearing stacked-letter inscriptions like CLAIRVOYANT TESTOSTERONE and HIERARCHICAL POTION OF POWER, effectively mock Western male claims of “natural” strength and privilege. Stephanie A. Lindquist’s botanical prints document cultivars such as sorghum (first grown in Africa) and rye (originally from Central Asia). Referencing Indigenous knowledge and, by virtue of her hands-on printing technique, implicitly disdaining dehumanized capitalist production methods, she celebrates our enriching everyday entanglements with nonhuman life-forms and things. In this holistic worldview—predating Western modernity, which splits nature and culture, subject and object—all matter has a soul. “I carry a river. It is who I am: /’Aha Makav. This is not a metaphor,” intones Diaz. 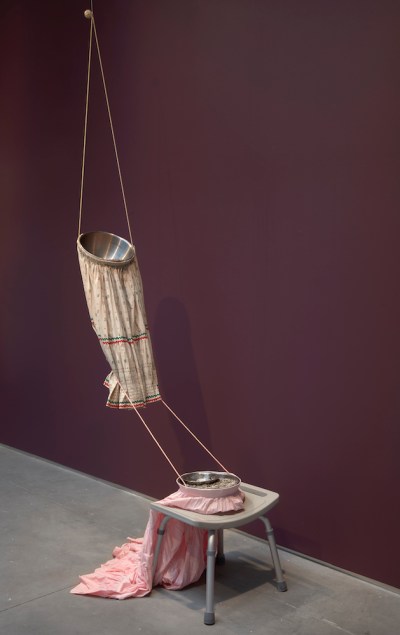 Wesley Chavis’s Remnants of a Mythical Man (2016) is a swath of canvas imprinted with traces of the artist’s oiled body, then brushed with charcoal and repeatedly hand-washed. Depending on one’s vantage point, two small photographs are either revealed or shielded from view: one of them depicts Chavis dancing joyously; the other, showing Chavis’s grandmother holding his infant body, conveys the life-affirming spirit of ancestral touch. Familial ties are also emphasized in Natani Notah’s Sister, Sister (2018), comprising a shower stool, two skirts (one of them suspended by rope), and a mixing bowl of pinto beans and sunflower seeds. Alluding, through its “missing” bodies, to the ongoing colonial violence against Native American women, the work questions, Notah said in interview, “what it means to hold up, hold onto, and let go of each other simultaneously, across generations and subjectivities.”

Hương Ngô’s Reap the Whirlwind (2018) comprises four serigraphs of Indochinese women, printed in virtually indecipherable fashion on high-gloss black paper, along with hand-bound books printed in thermochromic ink. Together, these elements evoke the concubine system involving Indochinese women and French men during the colonial period. Here, the historically exploited female figures acquire a kind of political agency by refusing the viewer’s immediate gaze, while the texts require one’s touch and body heat in order to become legible. The title echoes the Old Testament’s “they have sown the wind, and they shall reap the whirlwind,” a warning confirmed by some thirty years of anticolonial war in Southeast Asia.

Zina Saro-Wiwa’s video installation “Eaten by the Heart” (2012/13)—projected in a separate room outside the gallery—is a three-part documentary in which various people respond to questions about Black love in relation to choreography, cultural organization, and personal experience. Part III, Breathing Orchestra, presents a constantly changing grid of individuals who breathe deeply, with eyes closed, while their comments play in an audio collage. Finally, one male voice says distinctly, “Each of us are fractured, but we bring something beautiful to the table only if we look inside.” The speakers then fall silent, their pictures fading one by one into blackness and collective breathing, until only one man remains. He then calmly opens his eyes.

The Sm;)e Book Celebrates the Decades-Long, Eclectic History of the Smiley Face

The New Issue of Create! Magazine Is Out Now