In photo documentation of Theresa Hak Kyung Cha’s Aveugle Voix (1975), the artist appears in all white, squatting, with her black hair flowing down to her ankles. Performing in San Francisco, Cha bound her eyes with a length of white fabric on which VOIX (French for voice) was stenciled in black, and wrapped around her mouth another band marked AVEUGLE (blind). She then unfurled a scroll that reads: “words / fail / me,” and “aveugle / voix / sans / mot / sans / me” (blind / voice / without / word / without / me). Depending on whether one reads from the bottom, in the order that the words progressively appear, or from the top, after they are all revealed, the lines pose a multiplicity of meanings: How is one muted through the eyes, blinded by the mouth? The work’s title, literally “blind voice,” could also be a pun for “blind sees” (aveugle voit). Viewers attempting to unravel such paradoxes will be frustrated, for these ambiguities are part of Cha’s long flirtation with instability within language, and between language and experience. In her 1975 video Mouth to Mouth, a sea of black-and-white static slowly shifts to reveal an open mouth, stretching in variations of its O shape to suggest the vowels of the Korean language, which Cha spoke fluently, along with French and English. It emits no sound, however; instead, we hear rushing water and chirping birds, sometimes interrupted by the crackling hiss of electrical interference. The work suggests a preverbal inquiry into how we become somatically acclimated to the “mother tongue” long before we can speak it. The discontinuous sounds, meanwhile, suggest to me a kind of birth, both of a child and of language itself.

Cha’s investigations into the sociopsychological mechanics and effects of language are on view in two New York exhibitions this spring through summer: a mini-retrospective titled “audience distant relative” at the Hessel Museum of Art at Bard College, finely orchestrated by curatorial MA graduate Min Sun Jeon, and a selection of works in this year’s Whitney Biennial, “Quiet as It’s Kept,” curated by David Breslin and Adrienne Edwards. Aveugle Voix and Mouth to Mouth are included in both shows, as are the artist’s unfinished feature film, White Dust from Mongolia (1980), and her mail-art work audience distant relative (1977). The latter piece is a handmade artist’s book containing seven white folded sheets of paper abstractly labeled, when closed, with titles including “object/subject,” “messenger,” and “echo.” The texts, installed in a vitrine, contain poetic ruminations. “The messenger, is the voice-presence / occupying the space. / voice presence occupying the / time between,” Cha writes in one. “I can only assume that you can hear me / I can only hope that you hear me,” she pleads in another. 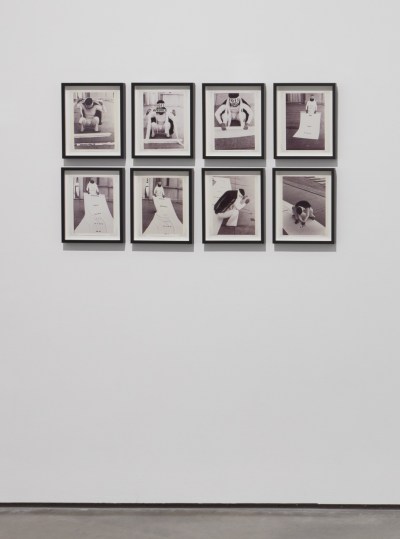 The eponymous exhibition at Bard opens with this work, but unlike the Whitney installation, the mail works here are accompanied by an audio piece in which the artist chants a breathy incantation that is unsettlingly serene, orphic, and vital: “In our relationship / I am the object / you are the subject…. In our relationship / you are the object / I am the subject.” This work sets the stage for the exhibition, which charts the artist’s attentiveness to the audience as activated through Cha’s manipulation, repetition, and reduction of words and images. In a text accompanying “Paths,” her 1978 MFA thesis show at the University of California, Berkeley, she writes, “The artist, like the alchemist, establishes a ‘covenant’ with his elements, as well as with… the viewer. The artist becoming object for the viewer, the viewer as subject, the artist as subject, and viewer as object.… It is through the presence of the ‘Other,’ any form of communication is established, completed.” Acutely attuned to how both verbal and nonverbal communication is engineered, Cha leaves openings for visitors to join the slightly off-kilter echoes and rhythms of her works, and even become enveloped in her logic of denaturalized, circuitous temporalities that reverberate within and across her written texts and photographs, books, videos, films, slides and projections, and performances.

The pacing of the Bard exhibition honors Cha’s use of associations, reverbs, and ripples. At times, voices from different films echo and intersect in an intricate dance, so much so that it can be difficult to trace the origin of any one voice. A soft, gauzy fabric delineates a space at the heart of the exhibition, enveloping Passages Paysages (Passages Landscapes, 1978), a three-channel nonlinear video installation that incorporates shots of Cha’s family photographs, rooms and rumpled beds, letters, and the artist’s hand. Most remarkable again is the presence of the artist’s voice, which alternates among her three fluent tongues. At times she seems to address us directly, while at others we seem to have stumbled into her internal thoughts: “불 켜봐, 불 켜봐” (Turn on the light, turn on the light), she says. “불 꺼져, 끄지 마, 지금 꺼” (The light is turning off, don’t turn it off, turn it off now). “아직 끄지 마” (Don’t turn it off yet). Here, she conveys her preoccupation with communication, as well as impediments to transmission—what remains unsaid or unheard. 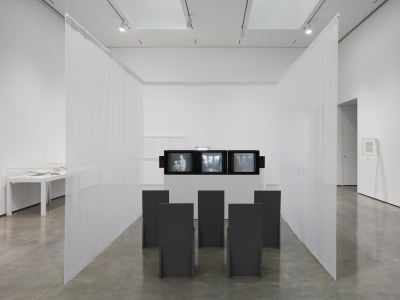 Readers of Cha’s genre-crossing autobiographical text Dictee (1982) will be familiar with her formal and conceptual technique of creating simultaneous, parallel conversations across multiple addressees and speakers, such as the nine muses of Greek mythology, Joan of Arc, Saint Thérèse, Korean revolutionary Yu Guan Soon, and Cha’s mother Hyung Soon Huo (a first edition of the book from the Bard library archives is on display). Cha was born in 1951 in Busan, South Korea, and her multilingualism was shaped by her family’s 1962 immigration to the United States, where she also learned French; her mother’s was necessitated by the 1909–45 Japanese occupation of Korea, during which she was forced to remain in Manchuria, where she was born. There, too, the Japanese had outlawed the Korean tongue, yet she continued to speak it in private while doubly displaced at this historical juncture between Korea, China, and Japan. “You speak the tongue the mandatory language like the others,” Cha writes in Dictee. “It is not your own. Even if it is not you know you must. You are Bi-lingual. You are Tri-lingual. The tongue that is forbidden is your own mother tongue.… Mother tongue is your refuge. It is being home.”

Situated at the points of fracture among languages, Dictee details how displacement and colonial encounters can spur alternate articulations of selfhood, always contingent and relational. Likewise, in Chronology (1977), included in “audience distant relative,” eighteen color photocopies of Cha’s family photos disrupt the typical linearity and wholesome propaganda of such albums. Photographs of Cha’s mother, father, and siblings are repeated in violet ink and sometimes overlaid until they become indiscernible, while the friction between form and message is heightened by hand-stenciled fragments of text: time’s own shadow, part ache / ake. A sister work of Chronology is included at the Biennial: rather sterilized in its presentation, the black-and-white photobook Presence Absence (1975), with its plain black cover, is displayed in a vitrine alongside a digitized video of its pages, which feature pixelated translations of the family photos used in Chronology. Cha’s deployment of material deterioration and distorted transfers of her family photos parallels her use of static sound in Mouth to Mouth: through the distortion of the source, she highlights how translation can open up the possibility for adding another layer of not only dissonance, but also enrichment and enlargement. She stages a postcolonial clash of lineages, histories, and narratives across language zones, divesting from the idea of the purity of the originating source and offering instead a view of how languages dynamically animate each other. 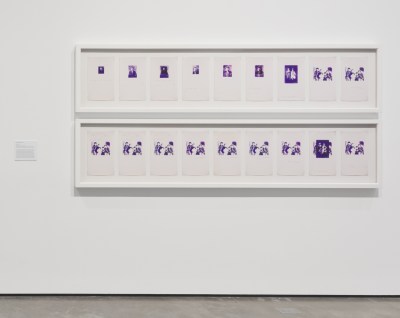 White Dust from Mongolia, on view in both exhibitions, also takes as its subject physical, psychological, and linguistic displacement. Comprising slow cinematic shots of train tracks, meandering footage of Korean people at a marketplace, and scenes from an airplane ride at a seemingly abandoned amusement park, among other quotidian shots of Korean life,  White Dust is a travelogue of sorts that Cha filmed with her brother on a three-month journey to their homeland in 1980. As she writes in the original sketches for the film, it was intended “as a simultaneous account of a narrative, beginning at two separate points in Time,” centering on a young Korean woman living in China and tracing the arc of her loss of memory and capacity for speech. Cha’s own migration and exile, as well as her roving intellectual curiosity, are refracted through her detailed shot descriptions and notes for the film and other projects that she was working on that same year, all of which are on view at Bard. (While working on White Dust, Cha edited Apparatus, cinematographic apparatus: Selected writings, which was published by Tanam Press in 1980, with essays on cinema by Roland Barthes, Dziga Vertov, Maya Deren, and Jean-Marie Straub and Danièle Huillet, among others.) In the year of Cha’s visit, army general Chun Doo-hwan mounted a brutal military coup, declaring martial law and suppressing the ensuing mass protests. These actions culminated in the Gwangju Massacre, in which civilians celebrated a brief governmental retreat before the rebellion was crushed.

None of this turmoil is depicted in the film, however, reflecting Cha’s characteristically allegorical and oblique approach to considering the world around her, as well as Jean-Luc Godard’s distinction between “making a political film and making a film politically,” the quote with which she opens the preface to Apparatus. Fitting into the latter camp, White Dust exists only in fragments, and was left unfinished after Cha’s murder in 1982 at age thirty-one.

The relative obscurity of Cha’s work during her lifetime was followed by a few exhibition highlights in the first decades following her death, including “The Dream of the Audience,” a retrospective of Cha’s work curated by Constance Lewallen at the Berkeley Art Museum and Pacific Film Archive in 2001. In light of the ongoing, cascading societal and political collapses of the 20th century that continue to shadow contemporary life, Cha’s prescient proposal of semantic and psychological fracture as a new constructive principle seems increasingly to resonate with a wider audience that includes many contemporary artists. At the Whitney, for instance, Korean artist Na Mira’s three-channel infrared, holographic video installation interweaves histories of Korean feminism and shamanism with biography, and explicitly features imagery from Cha’s White Dust. Taking up Cha’s elliptical, declarative voice—“우린 다른 시간에 왔어” (We arrived at different times)—together with camera glitches and throbbingCha’s embodiment of diasporic memory, which hints at something that is known but not yet expressed, begging to be released. As Cha writes in Dictee: “It murmurs inside. It murmurs. Inside is the pain of speech the pain to say. Larger still. Greater than is the pain not to say. To not say. Says nothing against the pain to speak. It festers inside. The wound, liquid, dust. Must break. Must void.”