Christ with the Woman Taken in Adultery, a painting by Vermeer, seemed to stand out among the many great works by the 17th-century Dutch master. It lacked the soft lighting of his other paintings, and it was short on his meticulous attention to detail. But its deficiencies didn’t matter much to Hermann Göring, a top-level Nazi who bought the painting for 1.6 million guilders, making it the most expensive artwork of its time. There was just one problem: It wasn’t an authentic Vermeer.

The forgery, which fooled even the most well-educated of experts, was instead the work of Han van Meegeren, who revealed at a 1947 trial in Amsterdam that he was the true creator of the work and that he’d painted it in an attempt to dupe fascists. Almost overnight, van Meegeren, a mediocre artist who had made few contributions to art history otherwise, became a local celebrity, and his forgery went down as one of the most notorious fakes of all time. Now, decades later, the events surrounding it have been taken up by Hollywood.

In a new film called The Last Vermeer (to be released theatrically in the U.S. on Friday), van Meegeren is brought to life by Guy Pearce, who plays the role of the deceptive artist with bombast and theatricality. He’s not the only major A-lister tapped to help animate the tale: there’s also Claes Bang (who memorably portrayed a down and out curator in the 2018 art world satire The Square) in the role of van Meegeren’s lawyer, and Vicky Krieps (from Phantom Thread), who aids in the proceedings as an assistant to him.

Director Dan Friedkin structures the story as though it were a mystery, ending it with a courtroom sequence that lasts nearly a third of the film’s runtime. But if only Friedkin had van Meegeren’s swagger. The Last Vermeer is hobbled by clichés and stock performances, and it often plays like middling Oscar bait. But its greatest crime is a disregard for the very thing which should make it tick: art itself. “Listen, I’m not really interested in art history,” van Meegeren says at one point, in a line that may as well stand in for the film’s interests as a whole.

Watching The Last Vermeer, we see—but never get to fully understand—how van Meegeren pulled off his feat. Several sequences show him at work, assiduously applying paint to his canvases. Later, he explains that he made sure to emulate Vermeer’s careful brushwork, enough so that some of the world’s top art historians were tricked. 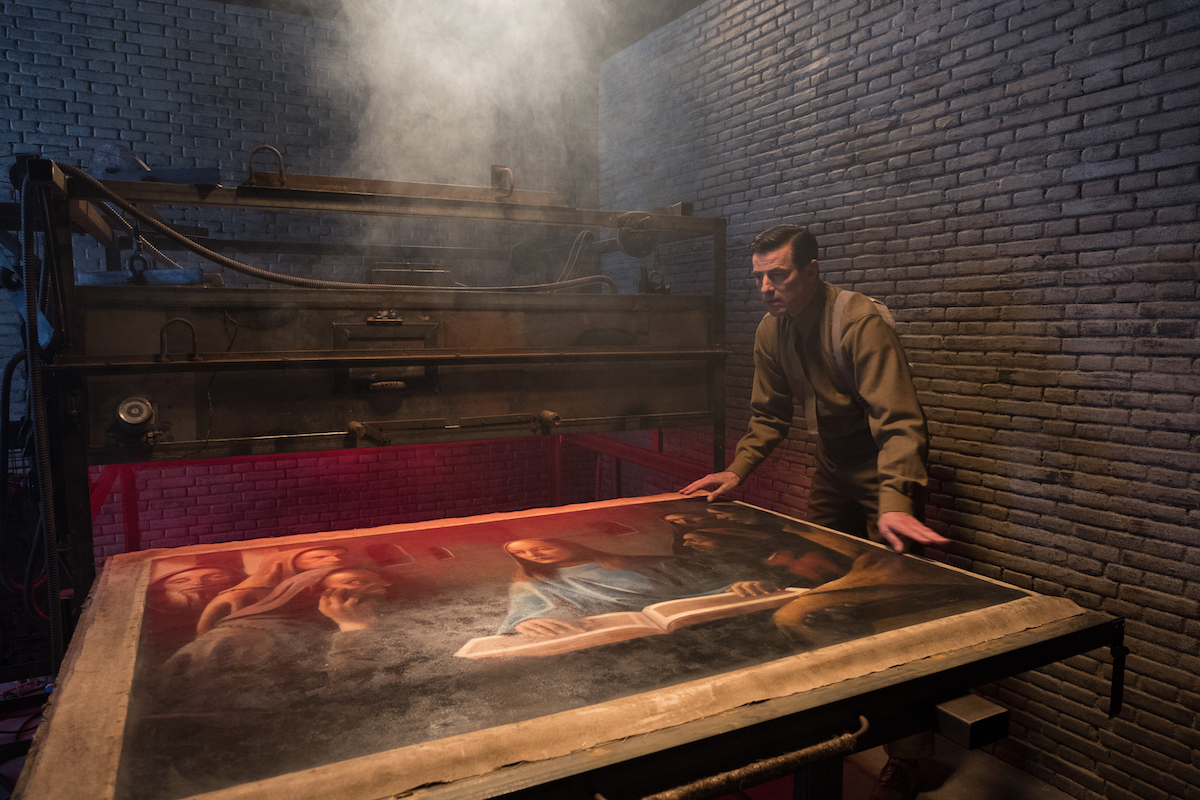 Still from The Last Vermeer.

Dirk Hannema, the director of Rotterdam’s Museum Boijmans von Beuningen, had purchased another purported Vermeer by van Meegeren (Christ at Emmaus, which remains in that museum’s collection as an acknowledged fake). Played by Adrian Scarborough, Hannema appears as a character in The Last Vermeer and explains how certainly he can recognize Vermeer’s style. “When it comes to oil paint, you simply can’t cheat time,” he says—before he is proven woefully wrong when a lawyer splashes a chemical on a painting and reveals van Meegeren’s signature beneath Vermeer’s.

Christ with the Woman Taken in Adultery and Christ at Emmaus both appear in The Last Vermeer as facsimiles, and it not at all clear how anyone with even a cursory knowledge of art history fell under their sway. Faces feel ill-defined, and compositions are slipshod, almost slovenly. One begins to think the attraction was not in the works themselves but in the mere suggestion of masterpiece status.

Experts have explained that van Meegeren’s forgery act was successful because of how little historians knew at the time about Vermeer. Only around three dozen paintings by him are known, though some historians have suspected there could be more out there. But facts of the sort are tossed off in the film in favor of suspense and drama pitched up to play as a sort of espionage thriller.

While there are no art history lessons to glean from The Last Vermeer, the screenplay shows periodic signs of life. At one point, van Meegeren is asked to explain why he pawned off his forgery to a Nazi. He responds, “I believe every fascist deserves to be swindled.”