Having canceled all three of its in-person editions, Art Basel has plowed forward with online viewing rooms. The first in a series of two online viewing rooms titled “OVR:2020” was launched on Wednesday, with 100 galleries from 28 countries participating. This iteration is focused on works made in 2020. The fair is hosting emerging and established dealers for the series. It follows the cancellation of Art Basel’s marquee Swiss fair that was originally scheduled for June, then rescheduled for September, and finally canceled due to coronavirus restrictions. The fair will run from September 23 to September 26.

In the pandemic era, global art fairs have been forced to adapt their online programs rapidly. Now, Art Basel is responding to digital fatigue with a new format. This online edition provides vendors a platform to showcase smaller curated exhibitions. While its run is shorter than a typical week-long fair, and while less than half the usual number of galleries are taking part in the event, the experience is overall a more intimate one, thanks to a live chat feature that allows sales personnel to respond quickly to inquiries.

Art Basel is hoping to do its part in helping galleries adjust to the shift online. “Based on the feedback we received from our audiences in the past months and weeks, we are introducing a new, more focused format for OVR:2020 (currently taking place) dedicated to works created this year and OVR:2020 dedicated to works from the 20th century, where collectors are able to explore a more tightly curated selection of works,” said Marc Spiegler, Art Basel’s Global Director.

Since the Art Basel Hong Kong online edition launched at the start of the pandemic, the sale format has developed. “Following the launch of our first Online Viewing Rooms in March, we have integrated parallel digital programming and other new features to the platform for our subsequent edition in June to create further opportunities for our galleries and collectors to interact in more meaningful ways,” said Spiegler.

Blue-chip galleries like Lévy Gorvy, White Cube, Blum & Poe, and Lehmann Maupin were among those who participated. Lévy Gorvy is holding a digital exhibition called “Till the Dawn,” which includes works by established names from its formidable roster. Early on, Lévy Gorvy sold Mickalene Thomas’s mixed media nude portrait Jet Blue #14. It was priced at $125,000, and it comes from the artist’s new series using appropriated images from 1970s pinup calendars. The gallery also sold Pat Steir’s black and silver canvas, Untitled XVI, 2020 (Taipei). It was priced at $360,000. Both works went to American collectors and sold for figures close to their asking prices, according to gallery cofounder Dominique Lévy.

“We are particularly proud to be presenting new and recent works by artists who bring years of experience, and I feel that their works created in 2020 will have a special resonance in the years to come,” Levy said in a statement. “Of course, we believe that works of art must be seen in person, to be discussed in good company, to be savored in space,” said Levy, adding that “online platforms are a tool to keep the conversation going and the art world informed about what artists are doing.” 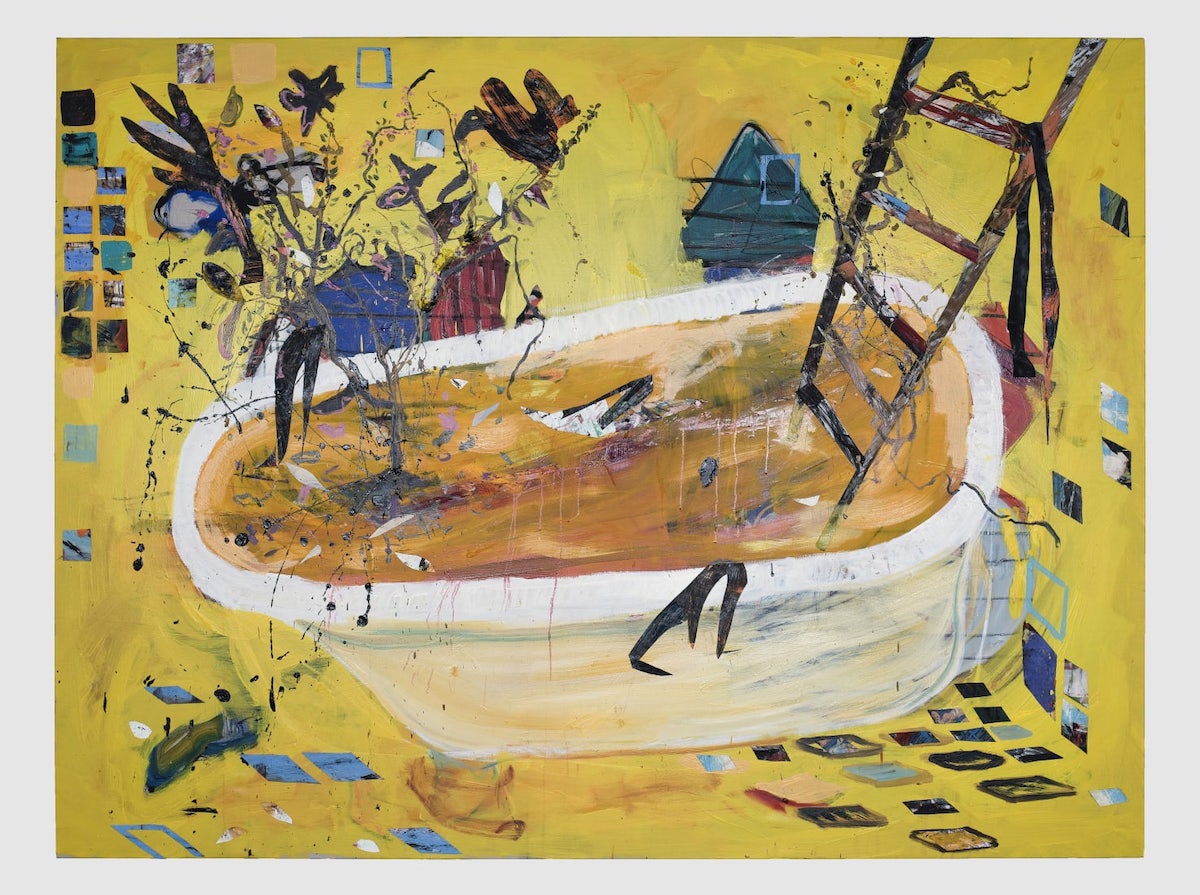 Lehmann Maupin sold Angel Otero’s painting Painter’s Bath (2020) to a prominent American collector for $120,000. “We have carefully selected artworks made in response to today’s global upheaval and uncertainty, to keep the audience informed about where the artists’ work is going and how it’s developed during this tumultuous year,” said gallery cofounder David Maupin.

Meanwhile, Los Angeles dealer David Kordansky placed several newly created large-scale watercolor paintings on washi paper by Sam Gilliam, each priced at $180,000, with collectors in the US and Asia.

Some galleries chose to highlight just one artist. Jack Shainman brought a new group of works by Brooklyn-based artist Paul Anthony Smith for the artist’s debut presentation with the gallery. Smith’s art involves portraits of people of the Caribbean diaspora that are made using a technique known as picotage, which typically involves driving small brass pins into a wood block to create patterning. Smith’s new works were priced at $10,000 to $50,000; one of them, a mixed media work titled Magnificent Fields (2020), had sold within the opening hours.

Small and emerging galleries representing cutting-edge artists landed fast-paced sales. Los Angeles’s Francois Ghelaby sold out a group of portraits by New York–based, Cameroonian-born artist Ludovic Nkoth at prices between $5,000 and $9,000. Nkoth was recently included in the exhibition “Black Voices/Black Microcosm” at Stockholm’s CFHill gallery. Belen Piñeiro, a director at Francois Ghelaby, reported the gallery fielded a “large and steady” number of requests, as well as new contacts on the first day of the fair. “Collectors are getting increasingly accustomed to navigating online fairs and have been highly engaged with the works that we presented.”

Eight Great Books for Getting Through a Creative Block