Zarina, an artist whose melancholy minimalist prints meditated on traumas resulting from forced displacements, has died at 83. The Hindustan Times, which first reported the news, said she died of a long illness on Saturday in London.

With her stark, stripped-down work on paper as well as sculptures, Zarina considered the emotional turmoil that followed her family’s personal experience with Partition, the violent division of British India into two states in 1947. But rather than depicting the horrors of her subject outright, she evoked them through tender abstractions whose politics only become clear when considered in reference to Indian history and the artist’s life.

In 1947, Zarina became one of millions of Muslims who were displaced to Pakistan. Though based in New York for much of her career, she said she never felt entirely at home there. “New York is not my home, this is someone else’s home,” she said in a 2017 interview conducted for the Metropolitan Museum of Art. “I’ve lived here for 40 years but my identity is basically that of an exile.”

The concept of home—both as a concept and an object—was a subject explored frequently by Zarina. In her 1999 suite of woodcuts Home Is a Foreign Place, she offers a series of spare images that resemble a cross between architectural plans and Minimalist aesthetics. (In formal terms, her work was has been compared to Sol LeWitt’s.) In some images, four bold lines stand in for a domicile; in others, hashmarks and circular forms resembling the lunar cycle evoke homes in a more metaphorical sense. Zarina has said each print included was a response to poetry written in Urdu, her native language.

The repetition glimpsed in this work and others relied upon by Minimalist artists in 1970s New York, but Zarina used it toward decidedly more political means. Homi K. Bhabha, a theorist who has written extensively on the impact of colonialism on recent art history, has claimed that Zarina’s repetition was a way of working through traumas. Art historian Zehra Jumabhoy has written that Zarina’s work focused on homes is “a perennial partition, a serialization of sadness.” 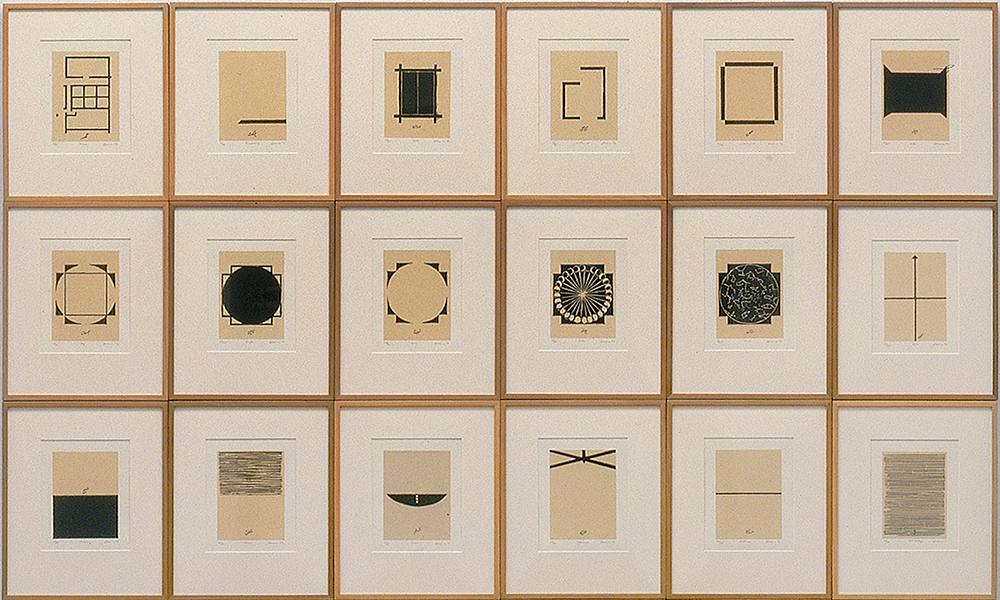 Zarina Hashmi was born in 1937 in Aligarh, India. Her father was a history professor at Aligarh Muslim University, where she later went to school for mathematics, and she credited his extensive library with spurring an interest in the possibilities of paper. In 1958, she married a diplomat and began traveling the world. She created prints at Paris’s Atelier 17 studio, where some of the most famous artists of the 20th century worked, and studied her preferred medium in Tokyo with the celebrated artist Toshi Yoshida.

In 1975, Zarina traveled to New York, where she worked for much of the remainder of her career. She fell in with an artistic crowd and her friends included artist Ana Mendieta, who invited Zarina to co-curate an exhibition at the essential A.I.R. Gallery, which hosted shows of feminist art. (Zarina declined the invitation because she felt the women who founded the gallery thought unwell of her, considering her too upper-class.)

Zarina had a complicated relationship with the feminist scene of the day. She served as an editor of Heresies, a short-lived but hugely important feminist publication, and she worked on its famed 1979 issue “Third World Women: The Politics of Being Other,” which included key texts by artists Jaune Quick-To-See Smith, Howardena Pindell, Adrian Piper, and others. But Zarina sensed a disparaging tone in the use of the term “Third World,” and her fellow editors were “horrible” to her, she told Post, a blog run by the Museum of Modern Art.

It has not been until the past few years that Zarina’s art has risen to prominence on the international circuit. In 2011, she was chosen to represent India at its first-ever Venice Biennale pavilion. One year later, a retrospective opened at the Hammer Museum in Los Angeles before traveling also to the Guggenheim Museum and the Art Institute of Chicago. Last year, the Pulitzer Arts Foundation in St. Louis mounted a major survey of her work.

Zarina described people being moved to tears by her art—in particular people who had experienced displacement themselves. In her interview with the Met, she said, “I realize that if you tell your story and if someone can come and cry on your shoulder, I think that is sharing.”

Lost Fernand Léger Painting Reappears After 100 Years Behind Another Canvas